On January 28, in what was an organized attack, a Doctors Without Borders/ Médecins Sans Frontières (MSF) vehicle was struck by a roadside bomb while traveling through the port city of Kismayo in southern Somalia. The blast killed Victor Okumu, a 51-year-old Kenyan surgeon; Damien Lehalle, a 27-year-old French logistician; and Mohamed Abdi Ali, a 28-year-old Somali driver. Another member of the team was wounded in the explosion.

It was their impulse to take action—to save lives—and bring a measure of hope to people in a war-ravaged country, such as Somalia, that brought them together from different corners of the world. We will greatly miss Victor, Damien, and Mohamed, and extend our heartfelt sympathies to their families and friends for their loss. In the midst of the grief and shock that such an attack provokes, the question immediately arises: What is the purpose of intentionally killing a medical team providing surgical care in a chaotic city where people are deprived of essential services? While we are currently investigating to understand what happened, there is no acceptable answer. The killing of our colleagues and the targeting of humanitarian aid workers must be firmly condemned.

Attacks such as the one in Kismayo vividly remind us that gaining acceptance for our presence and work can never be taken for granted, and may, in some places, be nearly impossible to achieve. In this issue of Alert, we republish an essay by François Jean (1956-1999) that touches on the very real dangers of practicing humanitarian aid in conflict zones. Though written a decade ago, this essay remains hauntingly relevant today.

The immediate consequence of the attack was the withdrawal of our 87 international staff from 14 projects across Somalia. Although hundreds of Somali staff continue lifesaving medical activities, the suspension of MSF’s international presence hampers our medical work. We are currently analyzing the security conditions to determine whether we can continue working in the country.

Weighing heavily in the balance is the consideration that Somalia has been experiencing heightened fighting and instability since the removal of the Islamic Courts Union administration in southern Somalia by Ethiopian forces backing the Transitional Federal Government in December 2006. Hundreds of thousands of forcibly displaced Somalis are in urgent need of immediate assistance, particularly in and around Mogadishu. 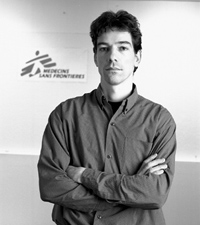 Thank you for your continued support of MSF’s work.