Given the current outbreak of the parasitic disease, more capacity to deal with the influx of patients is needed. The new site in Malakal comes in addition to MSF project sites in Lankien and Pagil and surrounding areas, all of which are treating unusually high numbers of kala azar patients. 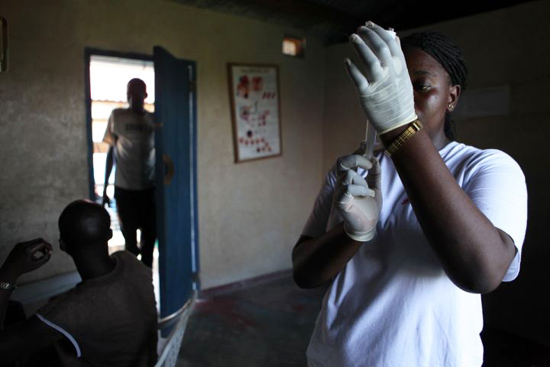 An MSF nurse prepares an injection for treatment of kala azar at an MSF-run facility in Pibor, Jonglei State, which neighbors Upper Nile State, where MSF is responding to high numbers of new kala azar patients.

Doctors Without Borders/Médecins Sans Frontières (MSF) is preparing to open an additional kala azar referral treatment site in Malakal, in the Upper Nile State of Southern Sudan. Given the current outbreak of the parasitic disease, more capacity to deal with the influx of patients is needed. The new site comes in addition to MSF project sites in Lankien and Pagil and surrounding areas, all of which are treating unusually high numbers of kala azar patients.

”We are going to support the kala azar ward in the Ministry of Health hospital in Malakal,” says José Hulsenbek, MSF’s head of mission in Southern Sudan. “In addition, we will also support the Ministry of Health in other locations surrounding the town, and we currently have an assessment ongoing to see how we can best deal with the reported increase of kala azar cases in this area.”

Malakal has been chosen not only because of the reported increase in patients in the hospital, but also to have a good referral site for people from nearby locations. Now that the rainy season is slowly subsiding, it will also be possible to refer patients, and for patients to come themselves, from greater distances to the hospital, allowing MSF and the Ministry of Health to treat more kala azar patients.

As of the third week of October of this year MSF has treated 1,454 patients with a cure rate of 94.5 percent. Currently, MSF is treating 342 patients in seven different locations. If left untreated the disease, transmitted through the bite of the sand fly, is fatal. Treatment includes not only drugs against kala azar, but also intensive treatment of associated infections such as pneumonia, diarrhea and anemia. In addition, there is also focus on malnutrition amongst patients.

MSF has been seeing a sharp increase in kala azar patients in its project locations in Southern Sudan since August, which was traditionally the low season for the disease. The peak of the current outbreak is foreseen to be around December and January.

The last big outbreak of the disease was eight years ago. According to MSF’s kala azar specialist, Koert Ritmeijer, there has been a whole new generation that has not built up immunity against the disease since then. "Other influencing factors are climatic conditions which favor the sand fly, allowing it to thrive and transmit the disease,” said Ritmeijer. “High levels of malnutrition in various regions of Southern Sudan because of insecurity and failed harvests compound the problem as it makes people more susceptible to kala azar."

MSF has signed an agreement with the Ministry of Health to provide supplies, training and supervision in the region around Malakal. In those locations where there is no local capacity available MSF anticipates sending up to 10 international and 50 national staff to support the Ministry of Health in dealing with the increase in patient numbers. Travel to some of these remote locations can be done by boat,  but supplies need to be flown in by plane to Malakal first before they can be distributed further.