Dr. Shepherd, a pediatrician, explains MSF's strategy to combat outbreaks of acute malnutrition in the country. Each year, tens of thousands of children, aged six months to three years, become acutely malnourished between June and October, the time period that corresponds to depletion of food stocks before the next harvest.

Susan Shepherd, MD, is the medical coordinator for Doctors Without Borders/Médecins Sans Frontières (MSF) programs in Maradi, Niger. Dr. Shepherd, a pediatrician, explains MSF's strategy to combat outbreaks of acute malnutrition in the country. Each year, tens of thousands of children, aged six months to three years, become acutely malnourished between June and October, the time period that corresponds to depletion of food stocks before the next harvest. Last year, MSF treated more than 100,000 severely and moderately malnourished children in several regions of the country. 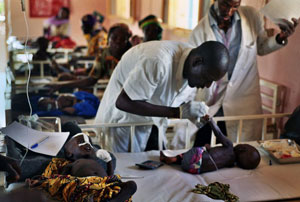 In Maradi, MSF has established a stabilization center for the most severe and complicated cases of acute malnutrition. © Anne Yzebe/MSF

What is the current situation?

This is a typically difficult year, the hunger gap has started and the families in the villages are forced to reduce the number of meals. They have to ration stocks of millet that are already very low and be very economical with the small amount of money they have to buy other foodstuffs such as milk or beans, for they still have four months to wait till the harvests.

While there is a degree of variability in the food situation among families, the nutritional situation of children under three is relatively homogenous. It is not only the quantity of food available that matters, but also the quality. Young children are the first to be affected by inadequate diet as they have considerable specific nutritional requirements during this period of very rapid growth. Infants in Niger eat mainly millet porridge, and occasionally milk. Practically none of them has access to infant foods , enriched with essential nutrients and formulated for their specific needs. These baby and infant foods are commonly available in industrialized countries where the general diet is already rich and diversified. Due to the lack of essential nutrients in their staple diet, a large number of children in Niger reach the stage of acute malnutrition, when the body draws on its own reserves to survive, and gradually exhausts those reserves. These nutritional deficiencies render them particularly susceptible to infection. 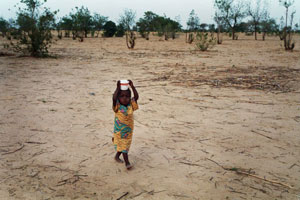 In Guidan Roumdji district, half of children aged six months to three years have suffered acute malnutrition during 2006. In 2007, MSF decided to give nutritional supplements to all of these children during the inter-harvest period—June to October—in order to prevent severe malnutrition. Since May, MSF has distributed four containers per month of a ready-to-use therapeutic food, Plumpy Doz. Children at risk receive three spoonfuls a day; this provides a complete daily dose of essential nutrients and 250 calories. The product will continue to be distributed to around 63,000 children until the harvest in October. © Anne Yzebe/MSF

How can we prevent children from continuing to die of malnutrition?

By identifying and treating them as soon as possible. When children suffer from acute malnutrition, their immune systems are so impaired that the risks of mortality are greatly increased. A common childhood disease such as a respiratory infection or gastroenteritis can very quickly lead to complications in a malnourished child and the risks of death are high. With early detection, a great majority of malnourished children are treated before medical complications develop, in out-patient nutrition centers not too far from their homes. Children come for weekly visits where they receive a ration of ready-to-use therapeutic food and a check-up to diagnose and treat any associated, uncomplicated medical conditions, such as an ear infections or malaria. If they are seriously ill, we of course admit them into our hospital for stabilisation. Weekly medical surveillance means a quick response is possible if the child does not gain weight or if the illness worsens. But it is the mother who remains the child's main caretaker, by giving the child a ready-to-use therapeutic food twice a day. Children generally return to a healthy weight after one month of home-treatment.

We know that 95 percent of the children who suffer from acute malnutrition are aged between six months and three years. This age group corresponds to weaning, the critical transition in the life of a child that starts when they begin to eat something other than their mother's milk and ends when they have completed their rapid growth period. We also know that the peaks of acute malnutrition among this age group correspond with the time period between June and October each year—the lean period between harvests. 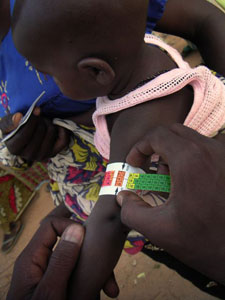 Regular screening of children for acute malnutrition, which can be done rapidly by measuring mid-upper-arm circumference (MUAC), is a critical part of diagnosing children at risk of death. © Anne Yzebe/MSF

Is it possible to prevent this peak in malnutrition that occurs each year?

In 2006, we succeeded in preventing the peak of severe acute malnutrition by treating children in the moderate-acute stage of malnutrition. But tens of thousands of children still flock to the nutrition centers over a short period of time, five to six months. And tens of thousands more suffer from nutritional deficiencies and easily fall ill, sometimes seriously. In 2006, we conducted approximately 250,000 medical consultations for children under the age of 5, in the nutrition program and in health centers.

This year, we decided to concentrate the out-patient nutrition program on children at the highest risk of mortality from acute malnutrition and to extend nutritional supplements to all children at a high risk of acute malnutrition, that is to say, all children between the ages of 6 months and 3 years. The focus is on the district of Guidan Roumdji because, based on admissions in 2006, we estimate that half of the children in this age group in this zone, suffered from acute malnutrition last year. As of May, every month we distribute four containers of a ready to use product, one per week, through 51 different distribution points in the district. Mothers give their young children three spoonfuls a day, which provides a full daily dose of essential nutrients and supplies 250 kilocalories. This is a food supplement, to be taken in addition to breast-feeding and the usual family meals. The distributions will continue through harvest time, for approximately 63,000 children. Children who fall ill are taken to the centre or to the nearest health post. Children under five are now treated free of charge in the health structures of the Niger Ministry of Health.

It is too early yet to assess the results, but we are already noticing a slight drop in admissions to the nutrition centers among children living in the area where we distribute the supplement. In addition, we have noticed that these children have fewer medical complications requiring referral to an inpatient centre. These are encouraging signs.

What are the admission criteria for targeting the children at risk of mortality from malnutrition?

This is a crucial question, for up till now, we have not had adequate criteria for identifying children at a high risk of mortality from severe acute malnutrition. However, the World Health Organization (WHO) recently published new growth standards taken from a study of children in Africa, Europe, Asia, and the Americas. This study confirms that children all over the world grow up and put on weight at the same rate during the first two years of their lives if they have access to adequate food intake in terms of quality and quantity (and clean drinking water). These new growth standards make it possible to better target malnourished children who present a high risk of mortality, particularly those in the 6- to 12-month age group.

We think our intervention can have more impact on the morbidity, or number of cases of illness, and the mortality of children related to malnutrition by providing all children in the at-risk age group with nutritional supplements and by concentrating medical resources on malnourished children with a high mortality risk.