Syria: "They Simply Want the Violence to Stop"

On the fifth anniversary of the brutal conflict in Syria, a Syrian doctor working in a suburb of Damascus reflects on fear, exhaustion, and uncertainty.

I work in mainly two clinics. One experienced numerous strikes, and it was closed down and we transferred to the second makeshift clinic, which was also hit a lot. The last strike against this second clinic was on September 28, 2015. Four people were killed, including a friend of mine who was the director. It was very violent, that strike.

We have rebuilt the clinic as we usually do. We’re still lacking the physiotherapy room and the outpatient department is currently just a big room divided between genders, yet the clinic still provides all types of medical services, starting from emergencies, outpatient rooms, surgeries, [and] laboratories to X-rays [and] physiotherapy. It is an essential clinic for the Ghouta area.

Patients are afraid to come because of the strikes. They always tell me not to take them to the clinics; they would rather go to centers (smaller health posts) because clinics and hospitals in the area are more likely to be targeted.

One of the Patients Might be a Family Member

You see all types of casualties. Just today, as patients were coming in, they were telling me how much I’ve grown in these times; I responded that this is because of the injuries I’ve seen. Because you see patients who lost a leg, their head decapitated, their hand cut off.

In the future, the doctors in areas like Ghouta will be considered the most famous in the world because of the extraordinary things they had to do. Because of the limited number of doctors in East Ghouta, and especially in any of the besieged areas, any doctor remaining is forced to play multiple roles. I am a urologist and a gynecologist, I’ve done more than 200 C-section surgeries, I’ve done general surgeries, and I’m a pediatrician. I have to do everything.

The hardest moment we face is the fact that when patients are brought in, you have this strange sensation that one of the patients might be a family member. More than that, you see a patient, who you’ve only spoken to five or ten minutes earlier, brought in without a face or head. This is truly the hardest moment for me.

The Worst of Times

It is a bit better today, but the years of 2013–2015 were the worst of times. The situation regarding resources has been improving for the last four months because of the easing of the blockade, and aid arrived around 10 days ago with about 53 kilos of goods allocated for each family. The breakdown is like so: 15 kilos flour, 10 kilos rice, 4 kilos bulgur, 5 kilos sugar, 6 kilos chickpeas, and a kilo of spaghetti. There were also some medical supplies. This was brought in by the Syrian Red Crescent.

They Simply Want the Violence to Stop

Yet in the context of this war, [things are] still very bad. There are always planes; always injuries, casualties, dead.

Everyone is fatigued with the fear and death. People all wanted freedom, wanted the revolution to persist, but now they have reached a point where they simply want the violence to stop. Everyday someone says goodbye to their relative. Every day there was fear. I was one of the few people who would go out in my car to other areas to work in makeshift clinics. Every time I go out, I would pray, because I’m not sure I’ll return to my children. Yet for the past five or six days now, I’m not afraid to go out. This is the first time, in three years, that I feel safe and unafraid from a strike. 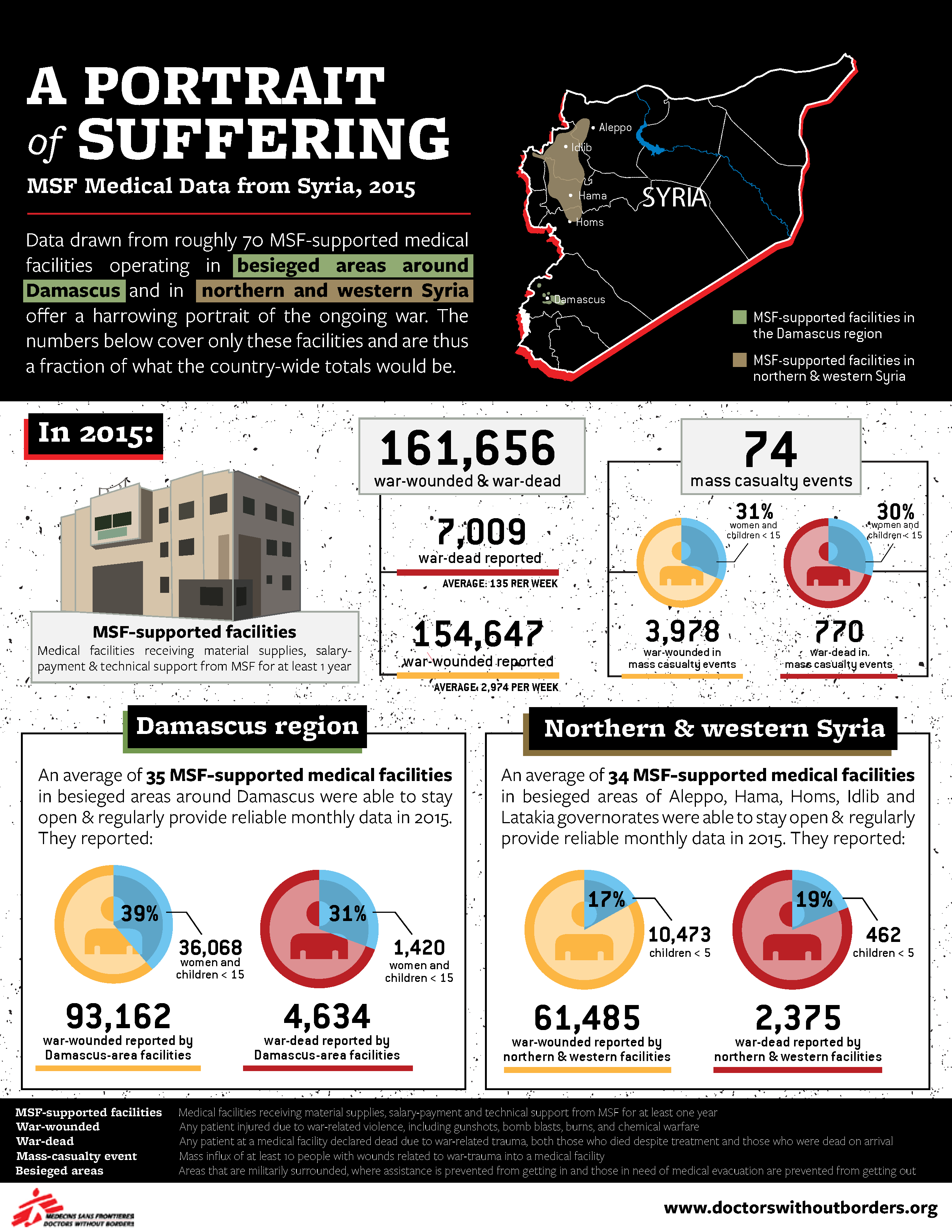