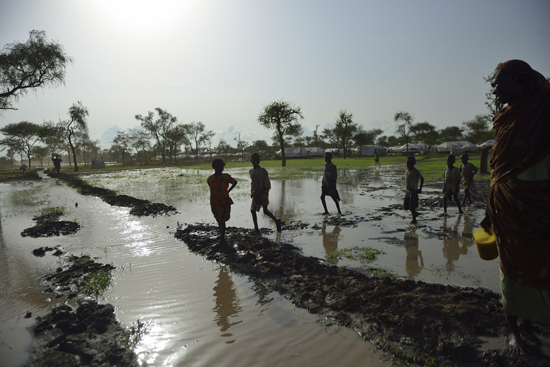 Shaba is 35 years old and has been living in Jamam with her family since December.

“We left our village Buk in September because there was fighting. In Buk, we had everything, but now we are naked. Four people in our village were killed in the fighting. My husband and I ran with our five children, but we got separated. We ran because of fear. My husband had three children and I took two. After one day’s walk, we met again in Kukur.

The night it rained, our tents filled with water. Everything was wet and no one was able to sleep. The children were cold and crying. The sorghum and all our clothes were wet.

In Kukur, life was difficult. The men would sometimes go back to Buk to get food, but there were so many people; there was not enough. There were bombings in Kukur, sometimes at night, sometimes early in the morning, sometimes during the day. No one would light a torch or a fire because we were afraid of being bombed. Bombs hit near our shelter in Kukur. We left Kukur to come to Jamam because we heard there was a safe place here. We walked for 12 days. We took some sorghum with us, but it wasn’t enough. Everyone was tired and the children had diarrhea.

Two weeks ago, my two year old daughter died. She had been sick for three months and she died from diarrhea.

The main problem in Jamam has been water. There has not been enough to drink. It takes a long time to get water to drink. We fill three jerry cans: one for breakfast, one for cleaning and one for the evening. Some people are old and can’t fetch water. Sometimes our neighbors can’t fetch water, so we share with them.

The other problem here is the flooding. Five days ago, we moved our tents across the road because they were completely flooded. The night it rained, our tents filled with water. Everything was wet and no one was able to sleep. The children were cold and crying. The sorghum and all our clothes were wet. There was no dry space to cook food, so we spent a day without food. Since the rain, I have been sick with a fever and cough. I haven’t been to the clinic yet because I was too weak. But I know about the clinic and I will go.

If there is peace, we want to return home, but if not, we will stay here. Still, I want to move to a better place because here, there is flooding.”