Timurgara, Pakistan: "I have lost my house, my animals, my family, and my mind" 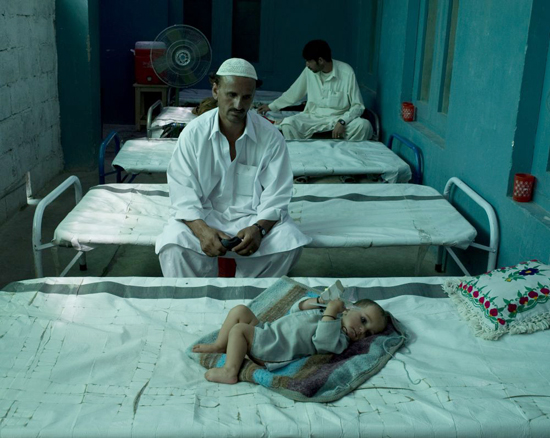 A father sits with his child who is sick from cholera. Patients generally stay for three day at MSF's cholera treatment center in Timurgara, Lower Dir District, where they are rehydrated.

In Lower Dir district in Pakistan’s North West Frontier Province several waves of displaced people have sought refuge since conflict erupted between armed opposition groups and the Pakistani army in August 2008. In the summer of 2009, Doctors Without Borders/Médecins Sans Frontières (MSF) helped set up camps for displaced people in Sumer Bagh, Sadbar Kalley and Munda, including securing medical care for 1,500 families in the camps.

Driving along the main thoroughfare that connects the small town of Munda to Timurgara, in Pakistan’s troubled Northwest Frontier Province, nothing seems out of the ordinary in the shops that line the road. But just behind the crowded shop fronts and bustling sidewalk trade, lies 506 tents—their white canvas roofs glistening in the early morning sun.

In these tents some 290 women, 270 men, and more than 2,000 children have been living for months. They wait hoping that the sporadic clashes between Pakistani troops and armed opposition groups and aerial attacks that drove them from their homes in the Bajaur and Maidan Agencies into neighboring Lower Dir, will cease.

In August 2008, MSF initiated free medical care and water and sanitation services in the displaced camps at Sumer Bagh, Sadbar Kaleh, and Munda as part of an emergency response to the conflict.

In the Munda camp, 14-day-old Kauser, lies safely cradled in her mother’s arms. Khubana Lal Rachman sits in her tent, surrounded by her meager possessions while the improvised cooking fireplace outside the door smolders. She was able to make it to the Timurgara district hospital, a bumpy 45-minute drive from Munda, before Kauser was born. But as with most other medical procedures it came with a hefty price.

Khubana paid around US$100 for the delivery—money which she had to borrow from friends and relatives.  "It’s a lot of money and I will have to repay it slowly," Khubana says. "But at least my baby was born in a hospital and my only hope is that she does not grow up in these tents and that she does not go hungry." Her husband struggles to make ends meet while trying to find work as a laborer.

Although conditions in the Munda camp are cramped with tents only a few feet apart, it is neat and clean, thanks to hygiene promoters and medical staff. At the health center Naseeb Gull is carefully monitoring his patient’s blood pressure and heart rate in the MSF outpatient department. He has seen five people already this morning.

"The conflict has had an intense impact on these people’s lives. It is a war and many of them do not know what happened to their relatives, whom they last saw when they fled. They suffer from anxiety and depression," Naseeb says.

Of the 53 patients who came to the outpatient department during the course of the day, 12 complained about headaches and general body pain, which is sometimes associated with post-traumatic stress. Wahid Mukhitar still suffers the anguish and trauma of the aftermath of the fighting he fled in Bajaur Agency.

"I ran away into the mountains. I lost my mind. I was wandering in the hills for 10 days. Ever since then I have been depressed. I feel like a walking corpse. I cannot understand why the soldier shot at me. I used to be a civil servant like him. I was a driver for the education ministry. Now I have lost my house, my animals, my family and my mind."

"At one of the checkpoints outside my village, Manyal, a soldier shot at me, several times," he says. "I ran away into the mountains. I lost my mind. I was wandering in the hills for 10 days. Ever since then I have been depressed. I feel like a walking corpse. I cannot understand why the soldier shot at me. I used to be a civil servant like him. I was a driver for the education ministry. Now I have lost my house, my animals, my family and my mind."

At the Summer Bagh camp—once home to about 5,000 displaced people and about an hour’s drive from Timurgara—19 year-old Ruhudullah Didanpuru relates how he ran 18 miles on foot through the mountains to flee conflict in Maidan.  "People were caught in the crossfire and they have suffered mental trauma," Ruhudullah says, as another salvo of artillery fire erupts from the Toor Ghundai military base close to the camp. "I can see the effect on the women, and the young men like me. The children are scared and they cry when they hear those guns."

While the trauma is a primary concern, Abdurrahman, a 50 year-old farmer and father of 10 children, says that before the arrival of MSF, medical care was too expensive for most people been living in the camp.  "Doctors in the area charge patients consultation fees of between US$4 and US$17 for a general health check-up," he says. "That means it takes us, working as casual laborers, up to five days’ wages to pay for a wife or children to be seen by a doctor. I’m really happy MSF is here and we can get to see doctors free of charge."

During the cholera season in September and October 2009, MSF operated three cholera treatment centers in Timurgara, Munda and Summer Bagh, treating a total of 2,500 patients. MSF also provides support to the emergency room, operating theatre and post-operative unit at the District Headquarter Hospital in Timurgara, where MSF treats about 40 percent of the 4,000 emergency room patients each month and is setting up a sterilization and a waste management system for the all hospital. MSF is also setting up an operation theatre in this district hospital that should be ready by mid-December.

In November 2009, MSF erected an additional 400 tents in the Munda camp to house displaced families fleeing continued fighting in Bajaur. The camps at Sumer Bagh and Sadbar Kalley have been closed. MSF distributed tents and basic relief items such as blankets, soap and cooking sets to the 400 families living in the camp as well as to 900 other families who have sought refuge in a building near the market place. MSF medical teams also provide basic health care to these people in an outpatient clinic set up in the camp and in a rural health center situated nearby.