As negotiations for the TPP agreement move to Malaysia this week, MSF urges negotiating countries to remove terms that could block people from accessing affordable medicines, choke off production of generic medicines, and constrain the ability of governments to pass laws in the interest of public health. 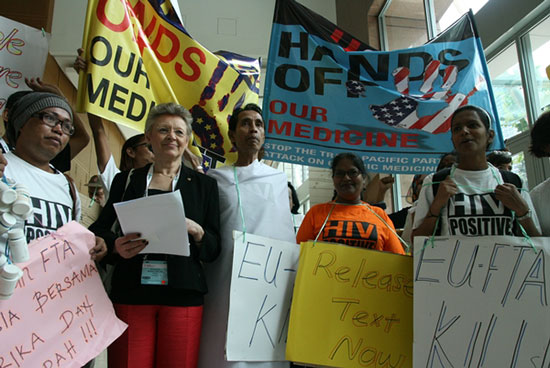 Malaysian activists launch a demonstration against the TPP during the International AIDS Society conference.

KUALA LUMPUR/NEW YORK, JULY 15, 2013—As negotiations for the Trans-Pacific Partnership (TPP) Agreement move to Malaysia this week, Doctors Without Borders/Médecins Sans Frontières (MSF) urges negotiating countries to remove terms that could block people from accessing affordable medicines, choke off production of generic medicines, and constrain the ability of governments to pass laws in the interest of public health.

"Just prior to hosting an international AIDS conference two weeks ago, the Malaysian government made an important pledge to reject harmful provisions in the TPP trade deal that will increase medicine prices for Malaysians, who already pay some of the highest prices for HIV drugs among developing countries," said Judit Rius, US manager of MSF’s Access Campaign. "We need all negotiating countries, including the United States, to not only make the same strong public pledge to protect public health, but also to ensure that the technical details of the deal truly fulfil their principled commitments to global public health."

With negotiators under pressure to finalize a deal, time is running out to fix the flawed TPP agreement, which currently contains a number of United States proposals that will extend monopoly protection on high-priced pharmaceuticals and delay the entry of affordable generic medicines. Restrictive intellectual property provisions could seriously constrain the role that pharmaceutical producers across Asia currently play in providing affordable medicines to both developed and developing countries; for example, by putting up new patent barriers that restrict the production and distribution of generics.

“The critically important role that many Asian countries have in supplying both generic medicines and the active pharmaceutical ingredients needed to produce drugs, is in jeopardy because of new restrictions proposed in the TPP,” said Rius. “The TPP threatens to put a stranglehold on the world’s supply of affordable treatments, with dire consequences for patients, treatment providers, and pharmaceutical producers in developing countries.”

In addition, several of the provisions being pushed by the U.S. facilitate the practice of so-called "evergreening," where pharmaceutical companies undermine access to affordable medicines by using a variety of tactics to extend monopoly protection on drugs beyond the initial 20-year patent period. For example, companies obtain multiple secondary patents on a single drug so that even when patents on the original compound expire, the product is protected for years by a thicket of patents that prevents procurement of more affordable generic versions. Countries that sign the TPP will have to amend their patent laws to abide by whatever provisions are in the final agreement. If the TPP were signed today with the proposals pushed by the U.S. included, it would be extremely challenging for countries to limit the abusive practice of evergreening.

India is one country that limits evergreening through a part of its patent law called Section 3d, which discourages companies from getting a new 20-year patent on modifications made to an existing drug that do not improve therapeutic efficacy. The recent Indian Supreme Court decision against Swiss pharmaceutical company Novartis in its seven-year legal case against the government, reaffirmed the importance of India’s law for public health.

However, if the TPP measures are introduced, similar public-health oriented laws, such as Section 3d, would not be allowed in TPP countries, making it much easier for drug companies to extend their market monopolies and delay the availability of affordable generic versions of their drugs.

Just two weeks ago, health activists at the International AIDS Society conference raised the alarm about how the TPP could raise the price of life-saving HIV medicines, and the International AIDS Society president responded by reiterating that the ‘provision of cheap generic drugs has been the cornerstone of many countries’ success in responding to the HIV/AIDS epidemic, said Rius. The IAS president further urged TPP negotiating countries to consider 'public and individual health first and put profits second’ and called for more transparency in the negotiations and, importantly, a public health exception that will allow all countries to sustain their current access to life-saving drugs.

"The time for negotiators to fix the TPP is now, In this round of talks, before political pressure escalates and a deal that is bad for public health is sealed in the interest of time." Rius said.

TPP countries currently are the US, Australia, New Zealand, Chile, Peru, Brunei, Singapore, Malaysia, Vietnam, Canada, and Mexico. Japan is joining the last day of talks for this negotiating round, and will participate fully in future rounds. Other countries have indicated their interest.