“Children become malnourished or even severely malnourished due to the lack of food, clean water, and a place to stay,” said MSF nurse Abdul Wasay. 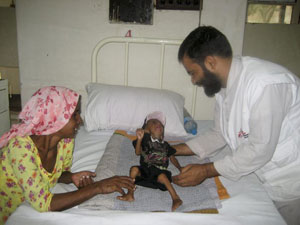 Like hundreds of other flood-affected people, Nabila was forced to leave everything behind in Lori village, and she is now living with her family in a relief camp in Sukkur a town in the North of Sindh Province.

“My daughter does not stop vomiting; she also has diarrhea, and a very high fever. I took her to the hospital, but she didn’t get better, so the doctor told me to bring her here,” said Nabila, holding onto her frail one-year-old, Suha.

Suha is severely malnourished and is being treated at MSF’s recently established intensive therapeutic feeding center (ITFC) in the pediatric ward of Railway Hospital in Sukkur.

The floods still ravaging Pakistan have left people without access to life’s basic necessities, such as food, water, shelter, and basic healthcare. Hundreds of thousands of displaced people have recently fled to Sukkur, and children like Suha, are among the most vulnerable.

To provide essential nutritional support, Doctors Without Borders/Médecins Sans Frontières (MSF) medical teams have set up an ITFC to treat severely malnourished children. Most of the patients are referred through MSF’s mobile clinics in various locations around Sukkur, where a tool for rapid screening called a MUAC—which stands for middle-upper arm circumference—helps determine the nutritional status of children under the age of five.

“Displacement has only exacerbated existing health problems, and children become malnourished or even severely malnourished due to the lack of food, clean water, and a place to stay,” said MSF nurse Abdul Wasay, as he proceeded with the morning rounds, checking on every patient.

The ITFC is run by four doctors, eight nurses, and four health educators, and it is open around the clock. The therapeutic feeding program includes the provision of high-calorie, nutritious food, including fortified milk and ready-to-use food supplements rich in micronutrients and protein.

“It is important that the ITFC stays open all day and night,” Wasay said. “Each child has to be fed every two hours, and we need to be able to monitor their appetite, digestion, and weaning diet closely.”

In an isolated room, eight-year-old Kubra’s head rests in her mother’s lap. “We need water, food, and accommodation,” said Noor, Kubra’s mother. “We need everything.” Kubra is isolated from the other patients because, in addition to being malnourished, she also has tuberculosis, which is highly contagious.

“The reality is that most of the patients we are treating today were admitted with another associated disease such as acute watery diarrhea, skin infection, pneumonia, or tuberculosis. It is important that they are correctly diagnosed and treated. Our health workers help the mothers understand the treatment process and raise awareness about nutrition, hygiene, and disease prevention measures,” said  nurse Wasay.

Since it opened on the August 28, the ITFC has already treated around 100 severely malnourished children.

The floods have left people with little to be optimistic about, but still, Nabila is hopeful that her daughter’s condition will improve. “I can’t tell when my daughter will be discharged, but I can tell that she is getting better. I am very happy that her diarrhea has stopped. She is more active and is starting to eat little by little, and I hope she will gain weight soon.”

Currently, 152 international staff are working alongside 1,279 Pakistani staff in MSF’s programs in Pakistan