For the past several weeks, MSF teams have been assessing the refugee situation at the border of the Democratic Republic of Congo (DRC) and Uganda. An 11-person team (three doctors, four nurses and three logisticians) are now working in three different sites to offer assistance to the refugees. 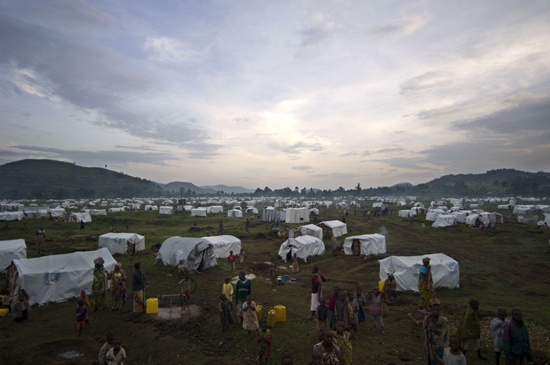 Congolese refugees take shelter in a camp in Kisoro, Uganda, about ten miles from the border, in December last year.

For the past several weeks Doctors Without Borders/Médecins Sans Frontières (MSF) teams have been assessing the refugee situation at the border of the Democratic Republic of Congo (DRC) and Uganda. An 11-person team (three doctors, four nurses and three logisticians) are now working in three different sites to offer assistance to the refugees.

In Ishasha, the main entry point from DRC, an MSF team began conducting medical consultations, organizing water supplies, and improving sanitation conditions when a first wave of 2,000 refugees arrived a few weeks ago. Since November 27, an estimated additional 10,000 refugees have flooded in.

The UN High Commissioner for Refugees (UNHCR) has been organizing the transfer of refugees to Nakivale transit camps, located 350 kilometers (more than 200 miles) to the east since people began crossing the border in late August. Now, transfers have stopped due to the risk of epidemics and people are settling in Matanda camp, 28 kilometers (17 miles) away from Ishasha. There are currently 8,000 people seeking shelter there. The MSF team is distributing 120 cubic meters (more than 40 tons) of water per day and conducting medical consultations. The team is now organizing an immunization campaign against measles and polio for the children in the district.

In Kisoro, 70 kilometers (more than 40 miles) to the south of Ishasha, MSF has been assessing the situation of refugees on the border for the past few weeks. With several aid agencies present and fewer refugees crossing into the area, the humanitarian needs are being met. The MSF team will start medical consultations next week at the Nyakabande site and MSF will provide logistical support to health centers for immunization.

In Kabahanda/Niakivale transit camps, 350 kilometers (more than 200 miles) to the east of Ishasha, 9,720 refugees have been transferred from the border by the UNHCR since August, when the fighting intensified between the main rebel movement and the Congolese army in DRC’s North Kivu province. MSF first started organizing medical consultations and have recently treated 53 cholera cases. A 24-bed cholera treatment center has been established. MSF is supplying 130 cubic meters (45 tons) of water per day and the team is cleaning and chlorinating the camp latrines. At the same time, the MSF team is carrying out community awareness activities about the importance of hygiene practices to contains the cholera outbreak, and has begun building a health center.

According to the UNHCR, close to 26,000 Congolese refugees have crossed the border since August.