In September 2008, MSF began an emergency intervention in the civilian prison of Guéckédou in southeastern Republic of Guinea. 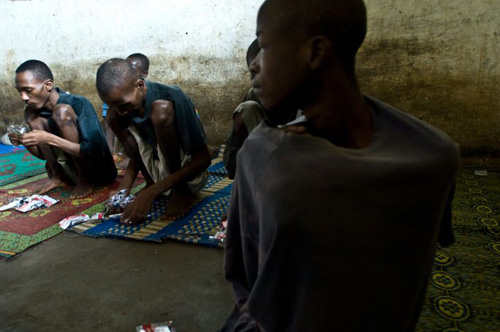 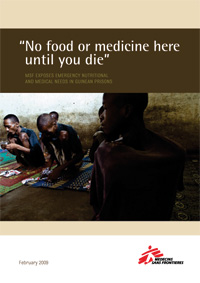 In September 2008, Médecins Sans Frontières (MSF) began an emergency intervention in the civilian prison of Guéckédou in southeastern Republic of Guinea.

Upon arrival, MSF found malnutrition in one in three adult male prisoners, one in five of whom suffered from severe acute malnutrition. Appalling hygienic conditions had led to dehydration and rampant skin and respiratory infections. Overcrowded cells mixed both minors together with adults and prisoners with tuberculosis (TB) together with other inmates. Health care was only infrequently available.

Although conditions varied in different facilities, all prisons MSF visited failed to provide basic needs such as access to water, food and health care and to maintain minimum conditions respecting prisoners’ human dignity.

These dire humanitarian needs demand an immediate response. Yet a short-term emergency intervention cannot be the solution to pervasive and more structural dysfunctions in penitentiary administration as regards food distribution and maintenance of hygiene conditions, impacting above all on adult male inmates. Deprivation of food, water, minimal living conditions and other basic needs is life-threatening and tantamount to ill-treatment of prisoners.

"“We have problems with food and illness here. There are no medications. There is no doctor. Since 2007, 30 people have died here and the doctor didn’t come."

-A male inmate, 19 months in prison

The failure to ensure basic minimum standards in Guinea’s prisons can be linked to the country’s generally poor human and economic development. Ongoing instability and conflict in neighboring countries have long impacted on Guinea, while strikes and civil unrest have emerged in-country over the past few years. The ongoing international increase in food prices, especially in 2008, has exacerbated Guineans’ already precarious living standards and food insecurity. As a result, the recurrent and already well-documented problem of malnutrition in Guinean prisons only deepened further in 2008.

Although the sub-standard conditions in Guinean prisons can be attributed partly to poverty and the country’s limited resources, these factors alone do not explain the absence of response to recurring malnutrition and the unacceptable living conditions in Guéckédou and other prisons. Guinean national authorities bear the ultimate responsibility to uphold the fundamental human rights of its inhabitants, including its incarcerated population.

National and local authorities must act immediately to meet the basic needs of prisoners in accordance with international and national standards. International donors and other actors intervening in Guinea must respond to ensure basic needs for prisoners, as their lives and health hang in the balance.