New York, September 6, 2006 — Doctors Without Borders/Médecins Sans Frontières (MSF) today announced a major public education initiative to bring attention to the plight of refugees and internally displaced persons (IDPs) worldwide who have been forced to flee their homes to seek refuge from conflict or persecution. 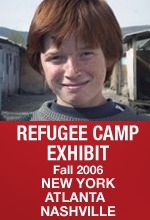 New York — Doctors Without Borders/Médecins Sans Frontières (MSF) today announced a major public education initiative to bring attention to the plight of refugees and internally displaced persons (IDPs) worldwide who have been forced to flee their homes to seek refuge from conflict or persecution.

An interactive, educational exhibit, entitled "A Refugee Camp in the Heart of the City," will begin a multi-year national tour in New York City's Central Park on September 15, 2006, followed by stops in Brooklyn's Prospect Park, Atlanta's Piedmont Park, Nashville's Centennial Park, and additional cities to be announced.

"A staggering 33 million people are currently displaced from their homes, having fled violence in more than 60 different countries around the world," said Nicolas de Torrenté, executive director of MSF in the United States. "As long as the response to the plight of uprooted people remains inadequate, we must continue to work to raise awareness of their conditions through public education initiatives like 'A Refugee Camp in the Heart of the City.'"

According to the US Committee for Refugees and Immigrants (USCRI) 2006 World Refugee Survey, of the 33 million people displaced around the world, 21 million are IDPs seeking safety from conflict within their own countries and 12 million are refugees who have fled to another country in search of safety. For example, in Sudan, more than 5 million people are internally displaced; in Colombia, IDPs number more than 2 million, and in Uganda, nearly 2 million. In some cases, entire generations have grown up as refugees or IDPs; for instance, some refugee populations, including more than 400,000 Sudanese and 2 million Afghans, have stayed in camps and other temporary shelters for more than 20 years. And each year, conflicts create new upheavals— in 2005 alone, two million people were newly displaced.

Made up of actual materials used by MSF in the field, "A Refugee Camp in the Heart of the City" brings to light the day-to-day living conditions of refugees and IDPs through interactive exhibits and guided tours by experienced MSF humanitarian aid workers. Visitors explore the challenges of finding safety, food, water, and shelter —the basic elements of survival— and learn how MSF provides essential medical care and controls epidemics.

The exhibit addresses a range of issues, including refugee and IDP rights, healthcare and nutrition, the different reasons people flee their homes, and what relief agencies are doing to support these distressed populations. In addition, photographs of humanitarian crises by world-renowned photojournalists will be on display, including images by Jean-Marc Giboux, Tyler Hicks, Sebastiao Salgado, Tom Stoddart, and Sven Torfinn. Tours of the 8,000 square-foot exhibit are free and open to the public.

The exhibit will appear in Central Park, New York, from September 15-17, in Prospect Park, Brooklyn, from September 20-24, in Piedmont Park, Atlanta from September 27 — October 1, and in Centennial Park, Nashville, from October 4-8. Call 1-800-490-0773 or visit www.doctorswithoutborders.org for more information.

Doctors Without Borders/Médecins Sans Frontières (MSF) is an international independent medical humanitarian organization that delivers emergency aid to people affected by armed conflict, epidemics, natural and man-made disasters, and exclusion from health care in more than 70 countries. In 1999, the organization was awarded the Nobel Peace Prize. For more information, please visit www.doctorswithoutborders.org.