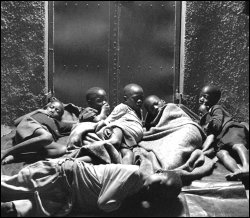 The "night commuters" - children who move in to the city to sleep.
Photo © Ton Koene

Kampala/New York, February 4, 2004 - Nearly 33,000 displaced people have sought refuge in Amuria, northern Uganda, since June 2003, according to the international medical aid organization Doctors Without Borders/Médecins Sans Frontières (MSF). The group has launched an emergency assistance program in the area to provide medical care and supply water to families and health structures. The health needs are pronounced. Many children suffer from severe malnutrition, and people were dying at twice the rate of what is considered an emergency threshold.

Because of insecurity, the hospital staff has abandoned the only health center in the town (with a usual population of 2,000). The water supply is failing and food supplies have not been delivered since mid-October 2003. A few families have found refuge in the town's only school, but most have had to construct makeshift homes. Without medical care, water, or aid, these people may die. People are captives in a town whose surroundings are insecure, and where several deadly attacks have occurred on roads leading into town. This is the fourth emergency program launched by MSF in northern Uganda, where civilians are increasingly prey to violence and insecurity.

In Lira, an estimated 230,000 people have sought refuge in nearly 50 makeshift camps since attacks in the district started last November. There is only access to 20 in town that shelter 80,000 people. Malnutrition is reportedly very high. MSF's program there consists of a mobile clinic, a 120-bed therapeutic feeding center (TFC), 2 supplementary feeding centers SFC), and a water and sanitation project. The TFC has been running at full capacity, treating 120 severely malnourished people at any time since the beginning of January. An additional 22 children were admitted this past week. MSF will open a second TFC to address this rising need. The SFC has admitted nearly 1,400 moderately malnourished children thus far. MSF has very limited access outside Lira town, and has every reason to suspect high levels of malnutrition there.

Further north in Gulu, another city within an insecure area, nearly 15,000 children come from surrounding areas at night to escape the kidnappings and other acts of violence. Most sleep without any shelter. Since December, MSF has provided medical care to 3,000 children, mainly treating them for parasites linked to poor hygiene. Assessments have also been carried out in camps north and south of Gulu, aimed at providing primary health care to people who are particularly vulnerable after years of insecurity.

In September 2003, MSF brought aid to 100,000 displaced persons in the town of Soroti, in the Teso region, where several massacres have occurred since June. Fuelled by extremely crowded and poor living conditions, many people died, mainly from a measles epidemic.

As fighting between the Ugandan army and rebels of the Lord's Resistance Army (LRA) continues, hundreds of thousands of civilians are exposed to brutal attacks. Witnesses have testified to particularly violent, large-scale abuses against civilians, including murder, mutilation, abduction, and rape. In this atmosphere of terror, civilians are forced to choose between staying in insecure villages and towns, thereby risking another attack that could cost them their lives, or fleeing to urban areas that cannot offer them even the minimum conditions necessary to survive.