Active fighting has hit the town of Pinga once again, forcing 20,000 inhabitants and the majority of Congolese personnel employed MSF to flee for the second time in six weeks. 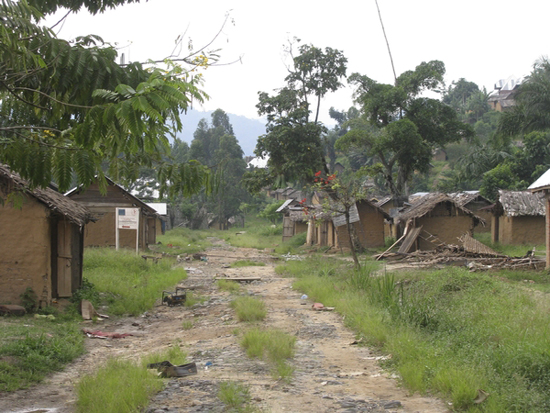 Looted and burned houses in Pinga after fighting between armed groups caused the majority of the town's population—together with many of MSF's Congolese staff—to flee the area in October.

NORTH KIVU, DRC, NOVEMBER 15, 2012—Active fighting has hit the town of Pinga in the North Kivu Province of the Democratic Republic of Congo (DRC) once again, forcing 20,000 inhabitants and the majority of Congolese personnel employed by Doctors Without Borders/Médecins Sans Frontières (MSF) to flee for the second time in six weeks.

Armed groups have clashed in the last few days, causing widespread panic and alarm in the area. Fearing for their lives, people grabbed whatever they could carry and ran into the surrounding forests. While displaced from their homes and villages, people’s access to health care is extremely limited. Some of those wounded in the fighting were brought to the MSF-run hospital 50 kilometers [about 31 miles] away in Mweso where doctors treated 24 people for violent trauma. Twelve more managed to reach the Mpeti health center 18 kilometers [about 11 miles] away from Pinga.

“What we see in Pinga is the tip of the iceberg,” said Grace Tang, MSF head of mission. “This kind of violence and mass displacement is happening throughout the province of North Kivu. We’re trying to respond as best we can in very difficult and challenging circumstances.”

A core team of skilled staff remains in Pinga and is attempting to maintain some services to the health center and hospital in the town, taking sheltering in a safe room when the violence becomes too intense. Support visits to health centers in surrounding villages is proving too dangerous at the moment.

The ongoing conflict in eastern Congo continues to cause high levels of violence and displacement and generates incredible humanitarian needs. MSF cares for thousands of people for free every month throughout North Kivu province in numerous hospitals, health centers, and health posts in Rutshuru, Masisi, Mweso, Kitchanga, Walikale, Muganga I and Lac Vert camps, Kanyaruchinya, and Pinga. There are also a number of cholera treatment centers, mobile clinics, and emergency response activities.