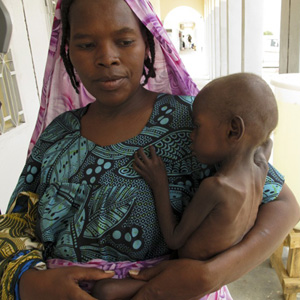 A mother brings her child to the 50-bed therapeutic feeding center that MSF set up in the hospital in Massakory, in Hadjer Lamis region north of the capital, N'Djamena. Staff at the center treat severely malnourished children with medical complications.

As the Hadjer Lamis region of western Chad is facing a nutritional crisis, Doctors Without Borders/Médecins Sans Frontières (MSF) has set up a number of emergency therapeutic feeding interventions. One of these is in Massakoury, one of the country’s main towns more than two hours drive from the capital, N’Djamena, where MSF is also running a therapeutic feeding center. Dr. Benoit Kayembe, the medical coordinator for this project, gives the details.

The food situation is serious throughout the Chadian Sahel strip that extends from the Hadjer Lamis and Kanem regions through Batha and Guéra. This is the result of two successive years of drought, swarms of locusts, a lack of drinking water and no access to care. The health care system in this region is shaky, even non-existent in some areas.

Could you describe the medical situation?

The best way to describe the magnitude of the food situation is to tell the story of Rabia, a mother age 20 or so. She brought us her one-year old son, who was immediately admitted in our program, suffering from severe acute malnutrition. Rabia had already lost three children from this illness that can, however, be easily treated. Here we see dozens of mothers who lose their children to acute malnutrition every year.

Since we started our action here, more than three weeks ago, we have admitted more than 1,000 malnourished children into our program. Around 100 of them had to be hospitalized.

Could you describe the program?

Currently, in Massakoury, we have one ITFC, inpatient therapeutic feeding center, where malnourished children who have serious additional medical complications, such as respiratory infections, are hospitalized, and 15 ATFCs ambulatory therapeutic feeding centers, where children are treated, but as outpatients in the various zones around Massakoury. Most of our patients live in places that are about a five-hour drive from N’Djamena. It is thus essential to set up mobile units to give patients easier access. Children suffering from severe acute malnutrition with medical complications are then referred to the Massakoury ITFC by MSF teams.

How are these children being treated?

Children treated in the outpatient programs are each given a systematic medical treatment and a week’s supply of a ready-to-use therapeutic food (RUTF) product made of peanuts and milk. It is rich in the micronutrients and vitamins that are needed by these children.

The children hospitalized in Massakoury are very weak, unable to drink or swallow, and even unconscious. In this case, beside medical care, they are given therapeutic milk initially, and RUTF later, once they start recovering. As soon as their condition allows it, they are followed as outpatients by the ATFC.

MSF is calling for more organizations to intervene in the region.

Some actors are already active in certain regions of Chad, but this is not the case in all the regions affected. It is necessary to have more actors involved to meet the needs of nearly two million people who are thought to require food aid in Chadin the coming months.

If the international community does not intervene rapidly, this country is on the brink of a catastrophic food crisis.

MSF is currently active in the Batha, Guera, Hadjer Lamis, Salamat and Quaddai regions as well as in the capital N’Djamena. It is also planning to carry out an assessment around Massaguet where the situation seems to be as serious as in Massakoury

How are the local authorities reacting to the situation?

The local, regional, and national authorities are aware that the food situation is very serious, owing to poor crops resulting from the drought and swarms of locusts in the last two years. The fields didn’t produce much and the crops are of very poor quality. Food prices are up and cattle breeders are selling their cattle to get money to buy food for their family.