What Uniting to Combat Tropical Diseases Will Really Require

In this op-ed Dr. Unni Karunakara, international president of MSF, calls for increased commitment to the elimination of neglected diseases. 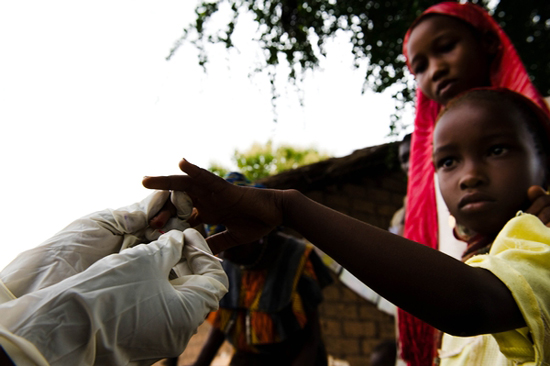 An MSF staff member tests a child for sleeping sickness.

Performing a spinal tap under field conditions is nerve-wracking. Sticking a needle into someone's spine to extract spinal fluid is painful and risky and that's just the doctor's perspective. But it's also something that our doctors have to do every day as part of routine tests for advanced stage sleeping sickness. Try too then, to imagine the experience from the patient's side. When I was in charge of Doctors Without Borders/Médecins Sans Frontières's (MSF's) sleeping sickness programs in the Republic of Congo, even the prospect of the test was sometimes too much and people took to their heels rather than undergo the procedure.

So we at MSF welcomed the commitments being made at a conference which happened in London yesterday, Monday 30 January, to attempt to eliminate this disease by 2020 along with the elimination or control of nine other so-called neglected diseases.

MSF treats sleeping sickness and several other of the life-threatening diseases under discussion in London, including Chagas disease and kala azar, and while we are glad that attention is being focused on them now, we are concerned that the conference is painting too simple a picture of how we can finally be rid once and for all of these diseases.

Continued and expanded drug donations from the pharmaceutical industry will be part of the solution to address some diseases under discussion and alleviate a great deal of human suffering. But that strategy will not meet the challenges of treating other, more challenging diseases like Chagas, kala azar or sleeping sickness. For these life-threatening diseases, drug distribution alone isn't enough—we will need to invest strongly in national screening and treatment programs, as well as the development of new and better diagnostic tests and medicines.

Regarding R&D, a 2011 survey reported a grand total of US$20.2 million investment for research and development by the pharmaceutical industry for the neglected diseases under discussion at the conference. This may sound like a lot, but Big Pharma generally claims to spend US$1.3 billion developing a single drug.

Let's return to the treatment of sleeping sickness for an example of the range of challenges that have to be overcome before we can begin to think of eliminating the disease: we have largely moved away today from the horrors of melarsoprol, an arsenic derivative injected into the patient and so caustic that it corrodes the plastic syringes. But even some of the improved drugs we now use can only be administered through a series of infusions that require specially trained staff usually in a hospital setting—a luxury in most places where sleeping sickness thrives.

To make a significant leap forward in treating this disease, patients need a medicine that can be taken orally and handed out at a simple community health post. The good news is that there are currently two promising drugs in development that could—eventually—deliver what we need, from the innovative partnership, Drugs for Neglected Diseases initiative (DNDi)—supported consistently by, among others, the British government.

New diagnostic tests and drugs will help but in their absence, the only realistic option for treating sleeping sickness today is to rely on specialized mobile medical teams that travel to affected areas to test and treat, as most patients with the disease are located in remote areas in fragile states such as the Democratic Republic of Congo (DRC), Central African Republic, and South Sudan. Even in these difficult contexts and with limited funding, mobile teams have done a great job. There were fewer than 7,200 confirmed cases recorded in 2010 as the numbers continue to decline. But treatment programs are now in jeopardy; Belgium, the main donor for DRC's sleeping sickness program, has announced that it will be withdrawing its support in 2013.

Screening activities also remain dangerously underfunded—there are probably three times as many cases of the disease than are actually reported. Past experience tells us that without adequate screening and treatment programs, we could see the number of cases skyrocket once more.

So if we are serious about eliminating this disease, we need properly funded treatment programs that include screening and surveillance; continued support for innovative partnerships such as DNDi to deliver newer and better drugs and diagnostics; and better policies to develop affordable medicines for patients in poor countries; and public authorities need to step up and take the lead on developing and maintaining these programs.

But unless people wake up to the need to commit to a broader range of challenges than those now before the conference, we won't finally see the back of these diseases for a while yet and sleeping sickness, Chagas, and kala azar will continue to debilitate thousands.