Winners and Losers in India

A major humanitarian crisis in a booming economy 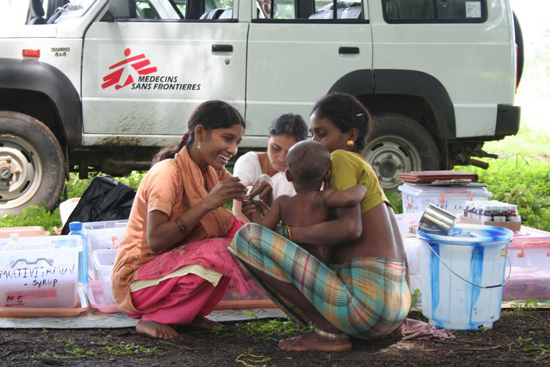 MSF medical staff examines a child during a mobile clinic in southern India near Andrah Pradesh, where 35,000 people are living without access to health care.

India's tiger economy is the envy of many — the eight lane highways, shopping malls, the luxury cars and the growing affluence of the middle class are all evidence of the country’s growing economic clout. Yet, this success masks a very different reality for most of the country’s population. South Asia is one of the world’s malnutrition ‘hot spots,’ and in particular India carries the largest burden of illness in the region. One half of India's children under five are underweight. So what lies behind these grim figures, and what efforts are being made to address the crisis? From New Delhi, Leena Menghaney of MSF's Campaign for Access to Essential Medicines outlines some of the main issues defining the debate.

India presents a striking paradox as a country that produces enough food to feed its own population and export its produce worldwide, while every day, 6,000 children are lost to complications resulting from malnutrition. And this is despite the fact that the Indian government runs one of the world’s largest child development programs, the Integrated Child Development Scheme (ICDS).

Malnutrition rooted in marginalization and inequality

India’s malnutrition rate is closely related to destitute poverty in most of its states. Government statistics show that malnutrition is particularly a problem for marginalized communities, such as tribes and the lower castes. Also, children living in India’s rural areas are worse off than the children that crowd India's growing cities.

Another crucial factor that contributes to early childhood malnutrition is the marginalized status of women in India. Malnutrition among women in India is a manifestation of inequality within the home and society, and as many as 83 percent of women are anemic. Women who are pregnant and poor are often malnourished and anemic, giving birth to babies with low birth weight. Poor immunization coverage and sanitation add to the bleak picture.

India’s poor nutrition statistics reflect a public health crisis rooted in hunger. What is most striking in all of this is that, unlike Africa, which is also seriously grappling with malnutrition, India is one of the world’s largest food producers.

Failing programs and the ‘Right to Food’ movement 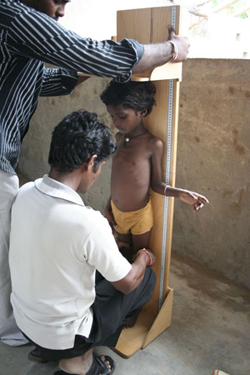 A child is measured by MSF staff at a therapeutic feeding center in Injaram IDP camp in Chhattisgarh.

Nutrition, health, and education are key components of the government’s ICDS, which is organized around day care centers in India's villages and towns. In theory, children under five receive education, food, and health care in these centers managed by community health workers. In practice, however, there are many flaws in the system ranging from poor infrastructure to corruption and discrimination.

Most importantly, the ICDS system has failed to reach the most vulnerable group of children, namely those under the age of two, despite the fact that malnutrition at this early stage of a child’s development will have a life-long impact on its health. In response to failing government programs, India’s civil society — led by the Right to Food movement — has taken a rights-based approach, underlining the fact that every child should have the right to good quality food, and holding the government accountable for its failure to deliver.

Right to Food movement activists, nutrition experts, and health workers in India believe that the solution lies in ensuring that the government exerts all efforts to seriously implement the ICDS, under which community-based kitchens are set up to prepare hot cooked meals rich in micronutrients and using a variety of local ingredients. The aims of these programs are to provide food to families in need, to improve the quality of food distributed, and provide employment at the same time. Few of the current solutions, however, provide short-term relief for those children who are severely malnourished and at risk of dying. 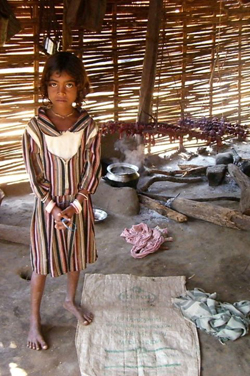 A displaced child stands in her hut in Andrah Pradesh.

Initiatives to distribute fortified foods and micronutrient supplements under the ICDS have been increasing in India. However, opinions are divided on ready-to-use food products as a means to address malnutrition, because the therapeutic effect and cost-effectiveness of such products have not been proven in India.

The opposition to ready-to-use food products by civil society organizations is also directly related to the fact that it may take employment away from rural communities, and from the over four million women involved in cooking hot meals for the ICDS.

Civil society is further concerned that the technology involved in producing ready-to-use food promotes centralized food procurement and allows for corporate domination of the food chain. This in turn affects the local economy and takes away from local autonomy over diets, which is a sensitive issue in India. Most importantly, representatives of the Right to Food movement point out that the discussion on supplementing local diets with ready-to-use food products to improve food quality is moot as long as the poorest children in India continue to have no access to food at all.

Despite diverse opinions, all parties in the nutrition debate in India certainly agree there is an urgent need to find solutions for children who are severely malnourished and at risk of dying.

The Integrated Child Development Scheme is perhaps the largest of all food and supplementation programs in the world and was set up as a governmental response to the problem of malnutrition in India.

Initiated in 1975, the ICDS was mandated with improving the health and nutrition status of children up to the age of six by providing supplementary food and by coordinating with state health departments to ensure delivery of required health inputs.

Under the ICDS, cooked food is provided to children through anganwadi (community) centers. One center is provided for a population of 1,000 (700 in the case of tribal areas). Fifty million children aged six and below are covered under this Rs.45 billion outreach program.