Tens of Thousands Remain in Deir Azzour in Need of Assistance

Tens of thousands of people, many of them wounded, are trapped by intense fighting and bombing in Deir Azzour. 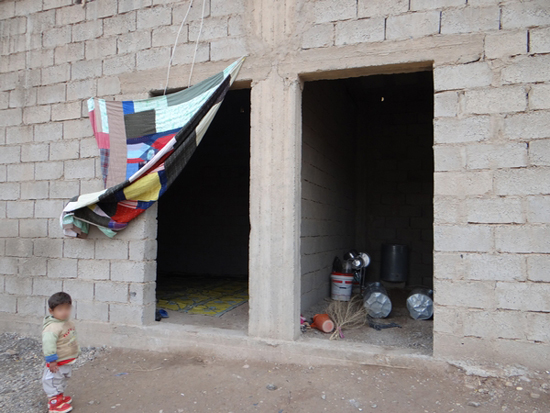 People who have fled shelling are living in precarious conditions without access to medical care.

DECEMBER 12, 2012—Tens of thousands of people, many of them wounded, are trapped by intense fighting and bombing in Deir Azzour, a city in eastern Syria, the international medical humanitarian organization Doctors Without Borders/Médecins Sans Frontières (MSF) said today, while calling for the evacuation of the injured and sick to safety and for international medical teams be allowed to work in the war-torn city.

An MSF team unofficially visited Deir Azzour governorate in late November to evaluate needs in the isolated, war-ravaged region. It was too dangerous for the team to enter the city of Deir Azzour, home to a reported 600,000 people prior to the conflict. Local residents reported that tens of thousands of people remain trapped in the city, which is shelled and bombed daily. Those remaining are predominantly poor and elderly, unable or unwilling to leave and now extremely vulnerable. Despite support from an organization of Syrian doctors, it is virtually impossible to obtain medical supplies in Deir Azzour.

“Deir Azzour now has just one makeshift hospital with only four doctors working there,” said Patrick Wieland, an MSF coordinator who recently returned from Syria. “The doctors are completely exhausted after six months of working in a combat zone. But they refuse to leave the city and are continuing to treat the wounded around the clock.”

Evacuating patients on stretchers is particularly risky because of aerial bombings and sniper fire.

The MSF team visited several public and private hospitals within a 50-kilometer radius of Deir Azzour, discovering surgical and emergency care services operating under very difficult conditions and further strained by significant patient numbers. One hospital alone received more than 300 wounded people during the week prior to MSF’s visit. Forty of the patients were transferred more than 400 kilometers towards Turkey, in the hope they could cross the border and receive proper care.

Remaining health workers in the area are trying to cope as best they can with minimal resources.
The health care system is a target and medical resources are shrinking as the number of wounded increases. Certain drugs, blood supplies, and essential medical materials are running out and cannot be obtained from Damascus. Delivery routes from neighboring countries are severely restricted because of insecurity, distance, and difficulties crossing borders.

As winter approaches, many residents of Deir Azzour city have found refuge with people living in surrounding areas and in public buildings, particularly schools. While the local population has responded generously, it is unable to meet all the immediate needs of the displaced.

MSF is calling for the evacuation of the wounded and sick from the city of Deir Azzour to safer locations, in accordance with international humanitarian law, and for the government of Syria to officially authorize the deployment of international and impartial medical assistance, which must be respected by all parties to the conflict. Despite the scale of humanitarian needs in the area, the Syrian authorities have not authorized such a deployment. MSF will continue to do everything possible to increase its presence and medical assistance—in collaboration with networks of Syrian doctors—in Deir Azzour governorate and elsewhere in the country.

MSF teams are working in three hospitals in northern and northwestern Syria, in areas controlled by armed opposition groups. MSF provides emergency medical care, including surgery. Since late June 2012, MSF teams have treated more than 2,500 patients and carried out more than 550 surgeries. In Jordan, Lebanon, and Iraq, MSF has been providing medical care to Syrian refugees and its teams are prepared to address additional needs arising from the conflict in Syria.