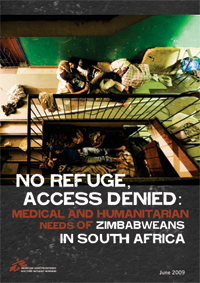 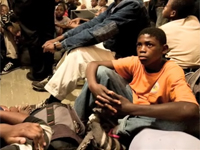 Recent developments in Zimbabwe and South Africa have done little to alter the fact that scores of Zimbabweans continue to flee to South Africa as a matter of survival. Once they cross the border, their living conditions hardly improve. MSF is calling on the government of South Africa and United Nations (UN) agencies to urgently address the specific humanitarian needs of vulnerable Zimbabweans falling through the cracks of South African society.

“Every day, despite claims that Zimbabwe is ‘normalizing’, thousands of Zimbabweans continue to cross the border into South Africa, fleeing economic meltdown, food insecurity, political turmoil, and the total collapse of their health system,” said Rachel Cohen, head of mission for MSF in South Africa. “Instead of finding the refuge they so desperately need, they endure intolerable suffering on their journey to and within South Africa.”

Since 2007, MSF has been providing basic primary health care, referral to secondary and specialized care services, emergency medical treatment for victims of violence and epidemic outbreaks, and specific services for survivors of sexual violence, as well as unaccompanied minors. Each month, MSF medical teams perform between 4,000-5,000 consultations for Zimbabweans in the South African border town of Musina and at a clinic at the Central Methodist Church in inner-city Johannesburg, a ‘safe haven’ for thousands of Zimbabweans.

“We see thousands of sick, wounded, psychologically scarred and marginalized Zimbabweans in both Johannesburg and Musina every month,” said Dr Eric Goemaere, medical coordinator for MSF in South Africa. “They come to us because they have nowhere else to turn. Many of those who reach us have chronic diseases, such as HIV and TB, and severe violence-related injuries, most often from rape and sexual assault experienced while crossing the border from Zimbabwe, but also in South Africa itself. Consultations in our Johannesburg clinic have almost tripled in the last year, a telling sign of the extent to which Zimbabweans are consistently denied access to even the most basic health services necessary for their survival.”

South Africa’s constitution guarantees access to health care and other essential services to all who live in the country—including refugees, asylum-seekers, and migrants—regardless of legal status. But in reality Zimbabwean patients are rejected outright, or are often charged exorbitant fees and subjected to long delays, inappropriate treatment, or premature discharge, thus placing health care out of reach for many.

“The stories of our patients are truly shocking,” said Bianca Tolboom, MSF nurse and project coordinator in Johannesburg. “I’m talking about pregnant women, unconscious or critically ill patients, even a six-year-old girl who had been raped, who were all refused the medical care they urgently required. It’s deplorable, it’s a breach of medical ethics and it’s a violation of their rights under the South African Constitution. This nightmare of neglect must end.”

MSF has been treating an increasing number of victims of sexual violence in Musina. In April, more than half of those treated had survived gang rape and 70 percent had been raped under threat of a gun, knife, or other weapon. Another worrying trend is the number of unaccompanied children crossing the border alone. They make their way to the Central Methodist Church, a journey of more than 500 kilometers, where as many as 4,000 Zimbabweans seek shelter each night - either dangerously packed into all available space inside the building, or sleeping on the pavement outside the church. Currently, there are more than 150 unaccompanied children between the ages of seven and 18 years crammed into the church. These children are extremely vulnerable and exposed to many forms of abuse in South Africa, yet no viable solution has been found to ensure they are properly assisted or protected.

“Each day, MSF teams witness the failure of the South African government primarily, but also of UN agencies, to meet the basic medical and humanitarian needs of vulnerable Zimbabweans,” said Rachel Cohen. “The recent announcement by the South African Department of Home Affairs that a new system will be put in place to regularize the legal status of Zimbabweans in South Africa, and to stop their systematic deportation, is a welcome departure from the government’s previous policy of aggressive harassment, arrest, and deportation. However, these measures have yet to translate into tangible improvements in the lives of most Zimbabweans. Their only places of safety are under attack and they remain relegated to the shadows of society, forced to live in squalor and denied access to adequate assistance and protection.”

MSF has been working in South Africa since 1999 providing HIV/AIDS and TB treatment, as well as care to survivors of sexual violence. In 2007, MSF began providing medical and humanitarian assistance to Zimbabweans seeking refuge in South Africa and presently carries out between 4,000-5,000 consultations each month through mobile clinics along the border in Musina and at a fixed MSF clinic at the Central Methodist Church in Johannesburg. MSF also has a large presence in Zimbabwe, treating more than 25,000 people on antiretroviral therapy in the country and, most recently, deploying a major emergency intervention and treating more than 50,000 patients in response to a cholera epidemic.