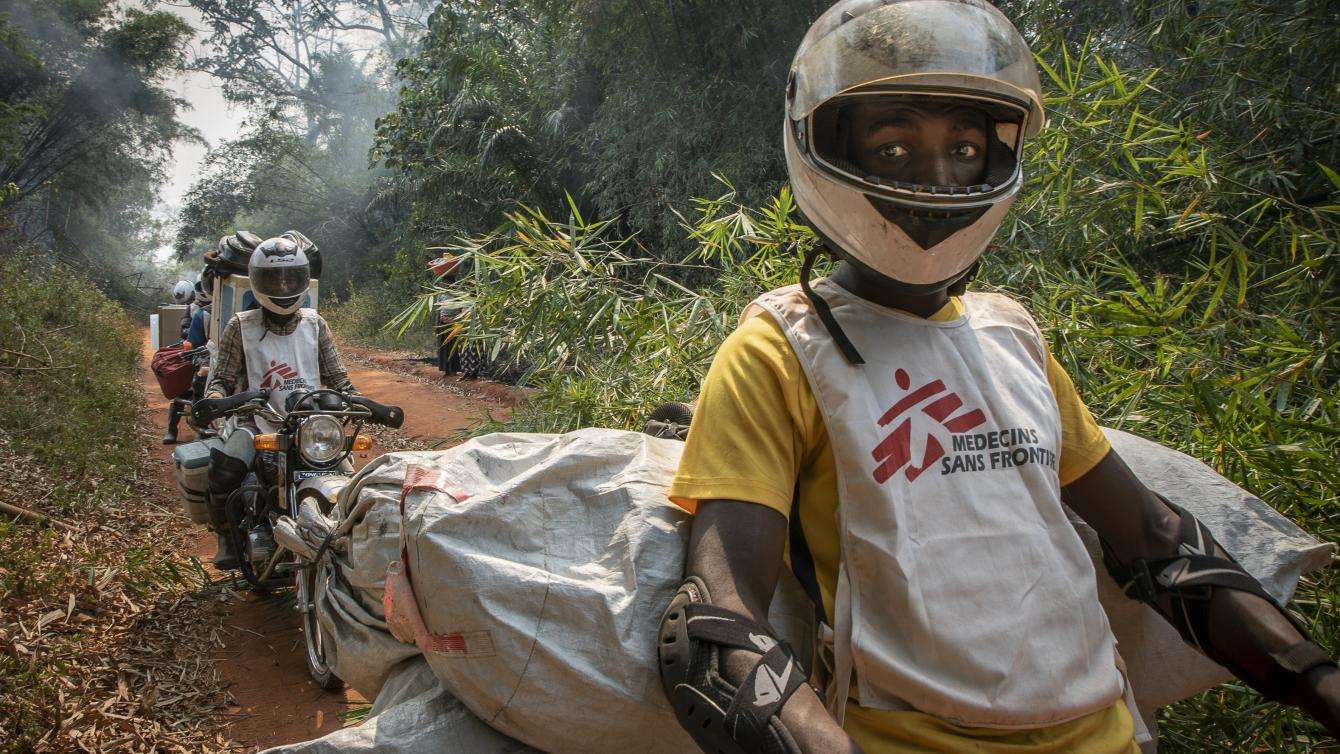 An MSF team delivers measles vaccines by motorbike from Lisala to Boso Manzi, Mongala province, a remote area in northern Democratic Republic of Congo hit hard by the epidemic. In May, MSF reported that the measles emergency was being overshadowed by the international response to the Ebola outbreak in the east of the country. At that time, more than 6,200 people had died of measles—nearly three times the death toll from Ebola. Democratic Republic of Congo 2020 © Caroline Thirion/MSF 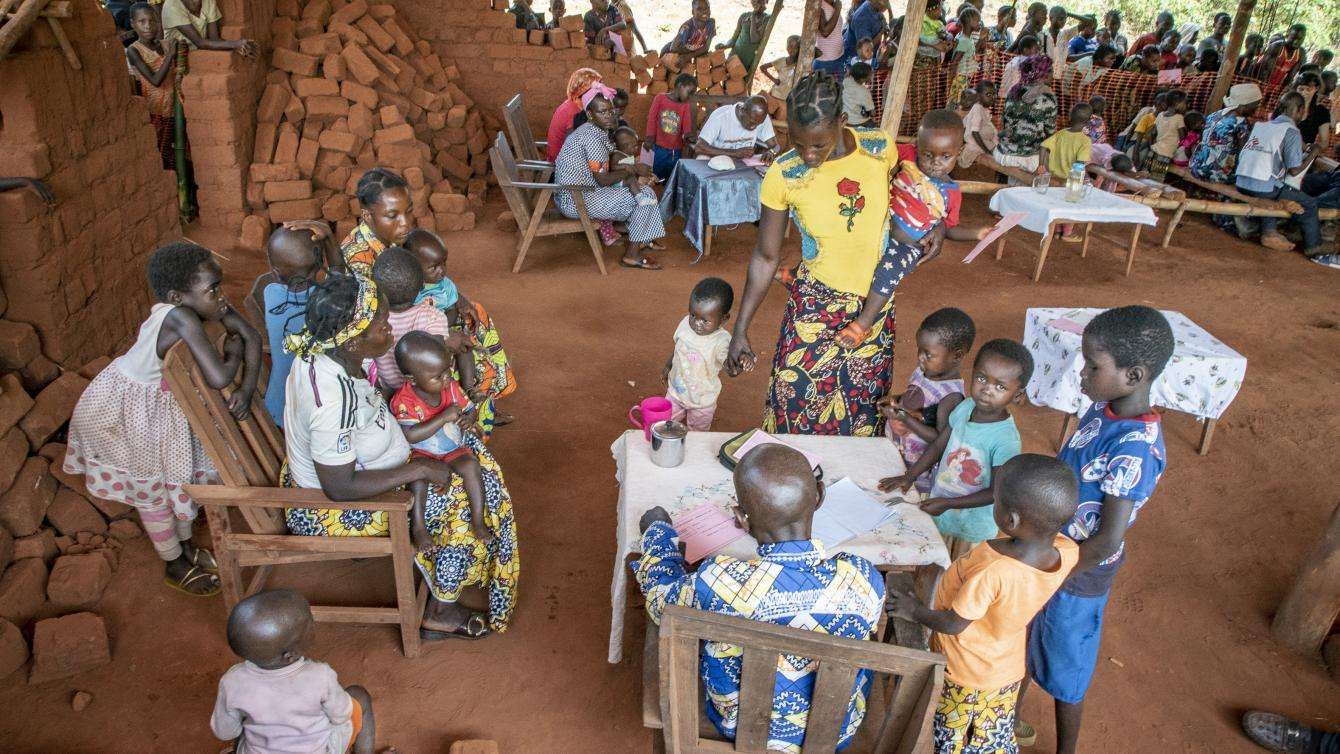 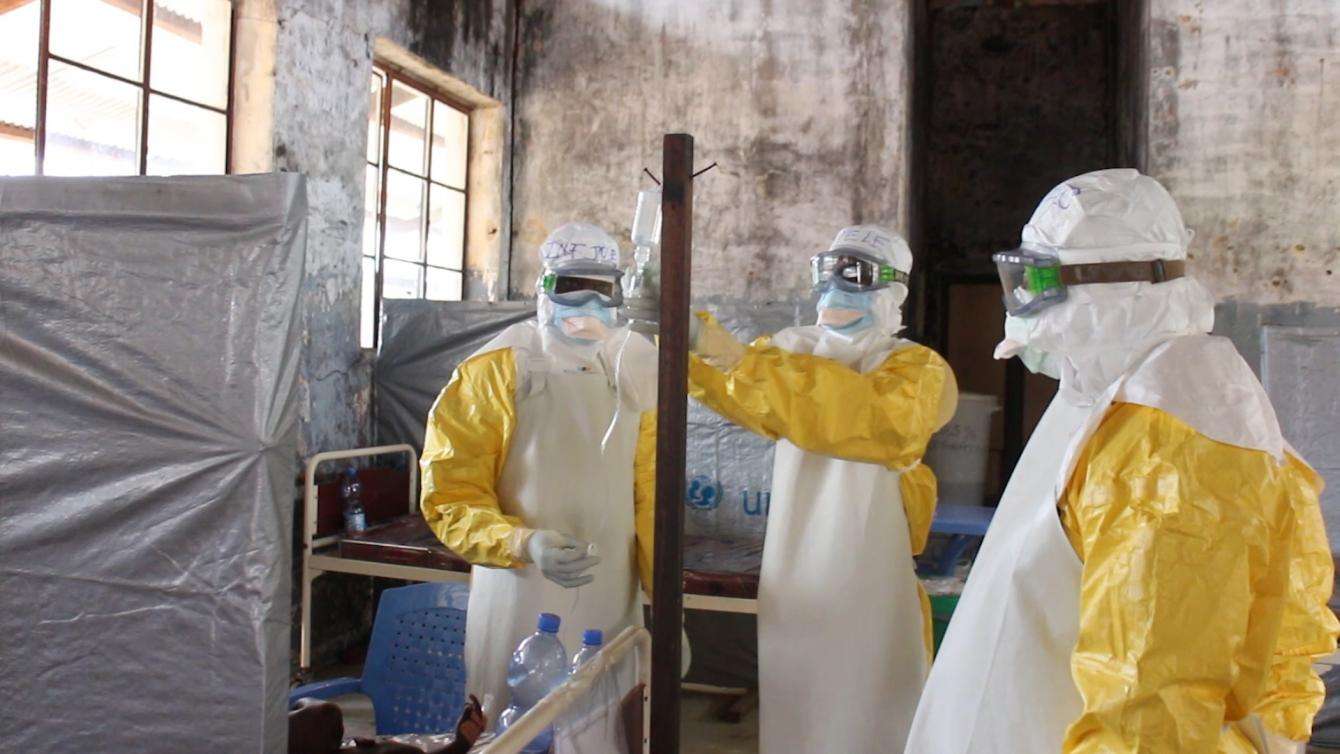 Medical staff provide care to a patient inside the MSF-supported Bolomba Ebola treatment center in Équateur province, Democratic Republic of Congo, where the country’s eleventh epidemic was recorded this year. The Ebola epidemic was declared over on November 18, thanks in part to a new vaccine, new treatment options, and a more community-centered approach. Democratic Republic of Congo 2020 © Franck Ngonga/MSF 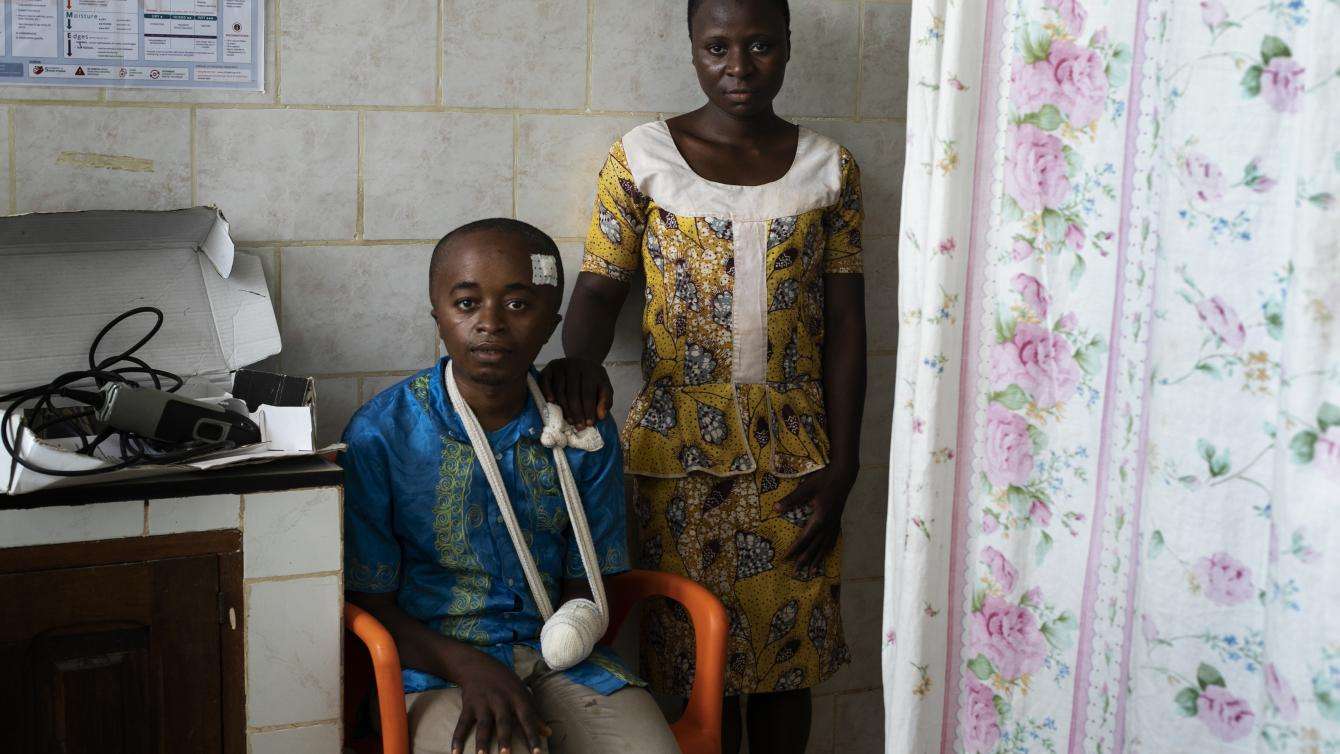 In February—just weeks before this photograph was taken—Felix and his family were attacked by armed men amid the spiraling conflict in northwestern Cameroon. An assailant cut off his left hand with a knife. “I lay bleeding on the ground for two hours before my sister dared to come back for me,” said Felix, age 23. “We hid in the forest for two weeks.” He was eventually brought to an MSF-supported hospital, where he was treated for his physical wounds as well as for psychological trauma. Cameroon 2020 © Albert Masias/MSF 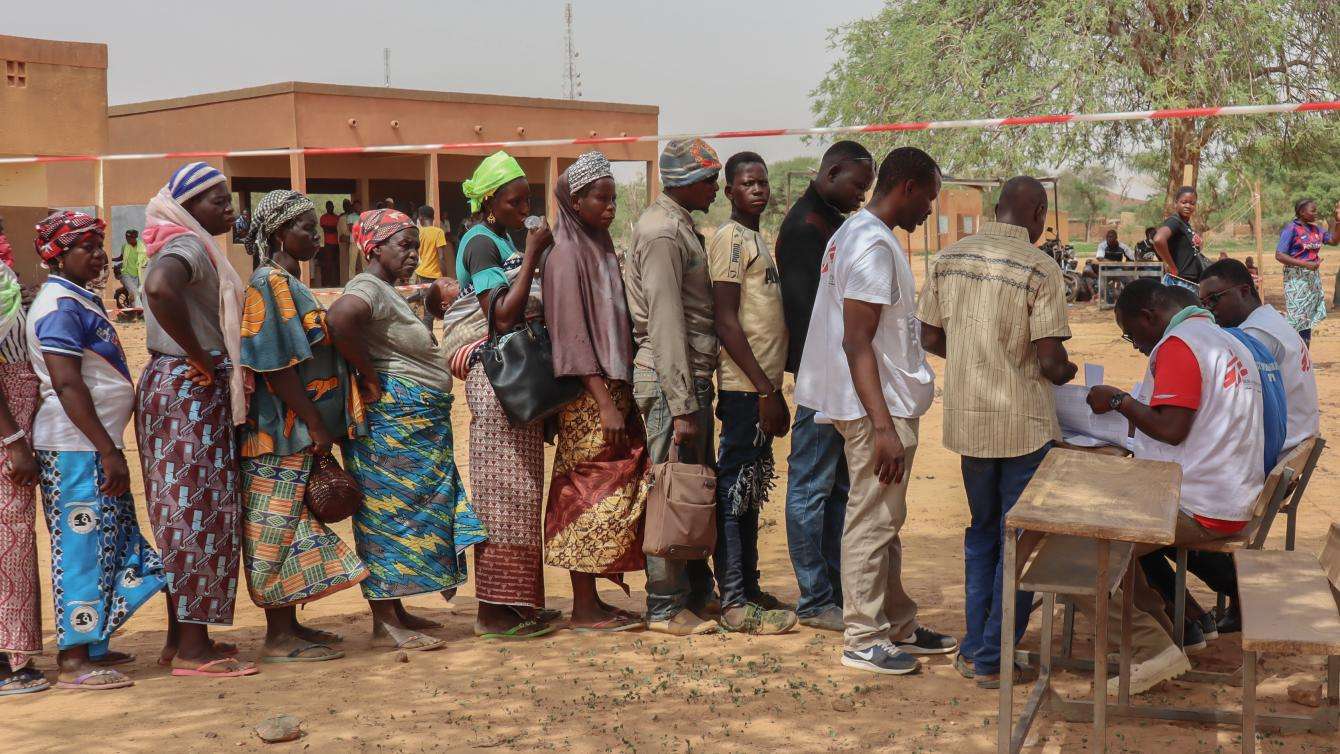 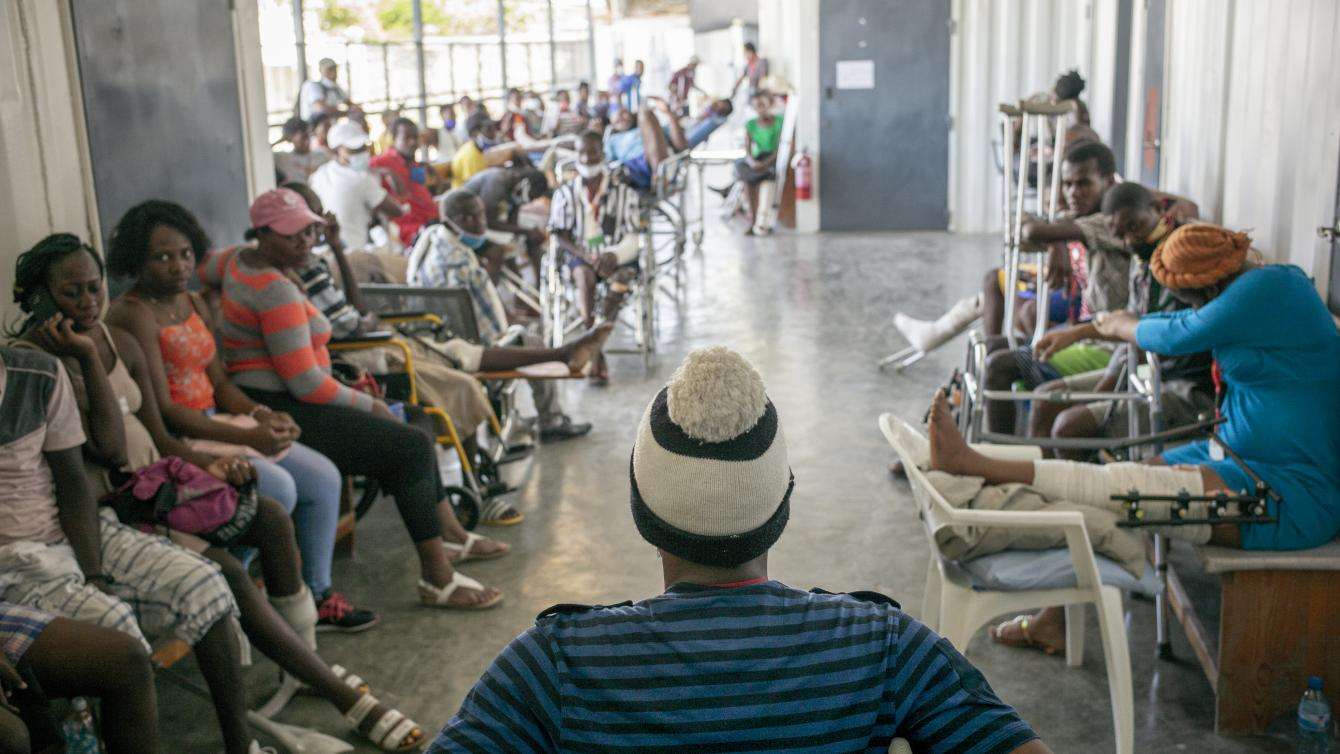 The outpatient department at MSF’s Tabarre trauma hospital receives about 80 patients per day. More than half of the patients are victims of chronic violence. According to Roussena Rouzard, outpatient department head nurse with MSF, “Orthopedic patients have a long rehabilitation process. Due to the security situation in the city and the country. we have patients who don’t come to their follow-up appointments for up to two months. Some people come from the countryside which makes it challenging for them to reach Tabarre.” Haiti 2020 © Guillaume Binet/MYOP 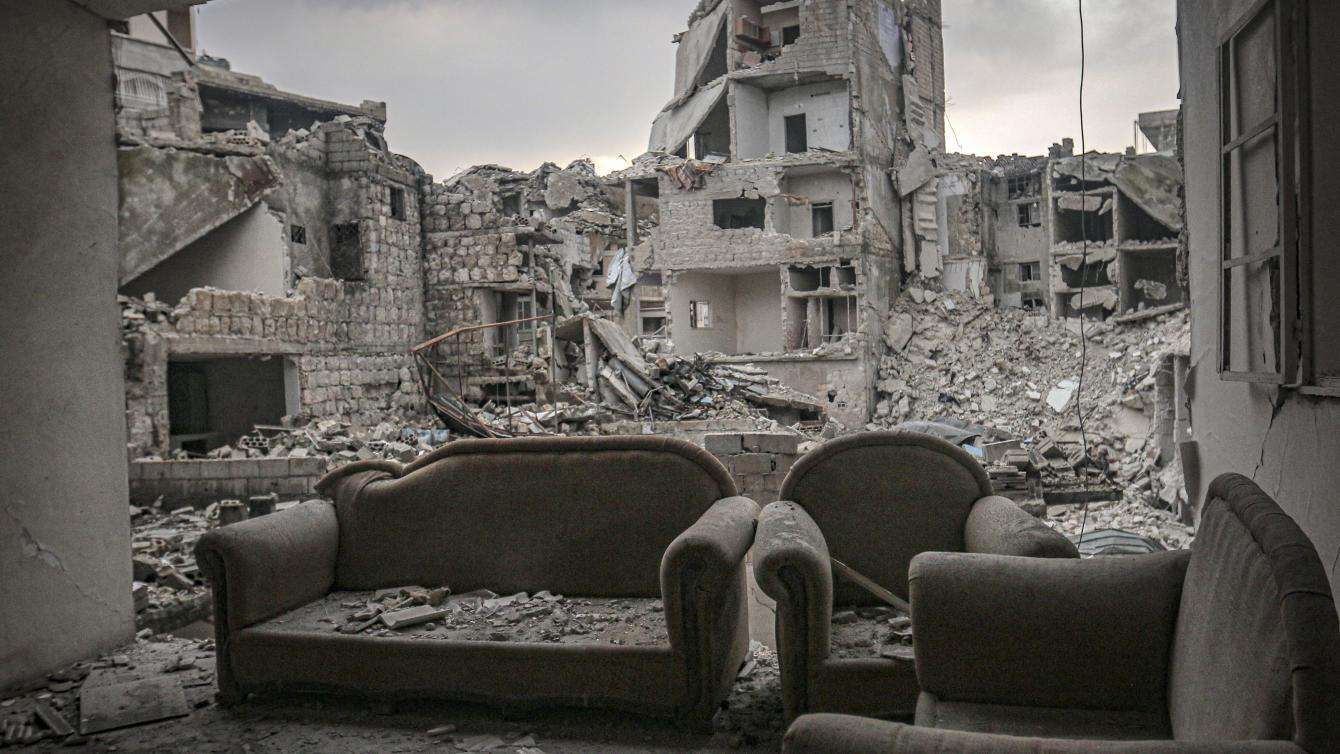 Ariha district in Idlib, Syria, became a ghost town as civilians fled indiscriminate attacks by the Bashar al-Assad regime and its supporters earlier this year. On a single day, February 25, three hospitals supported by MSF received 185 wounded patients, including children. Cristian Reynders, MSF project coordinator for northwestern Syria, spoke out about the extreme pressure on local medics: “Now picture this…. You are a doctor. You are already not equipped. Your hospital is not in good shape. And now you have tens of people—wounded, bleeding, with limbs falling off.… And you are responding to this, knowing that maybe the next bomb will be for you.” Syria 2020 © Muhammed Said/Anadolu Agency via Getty Images 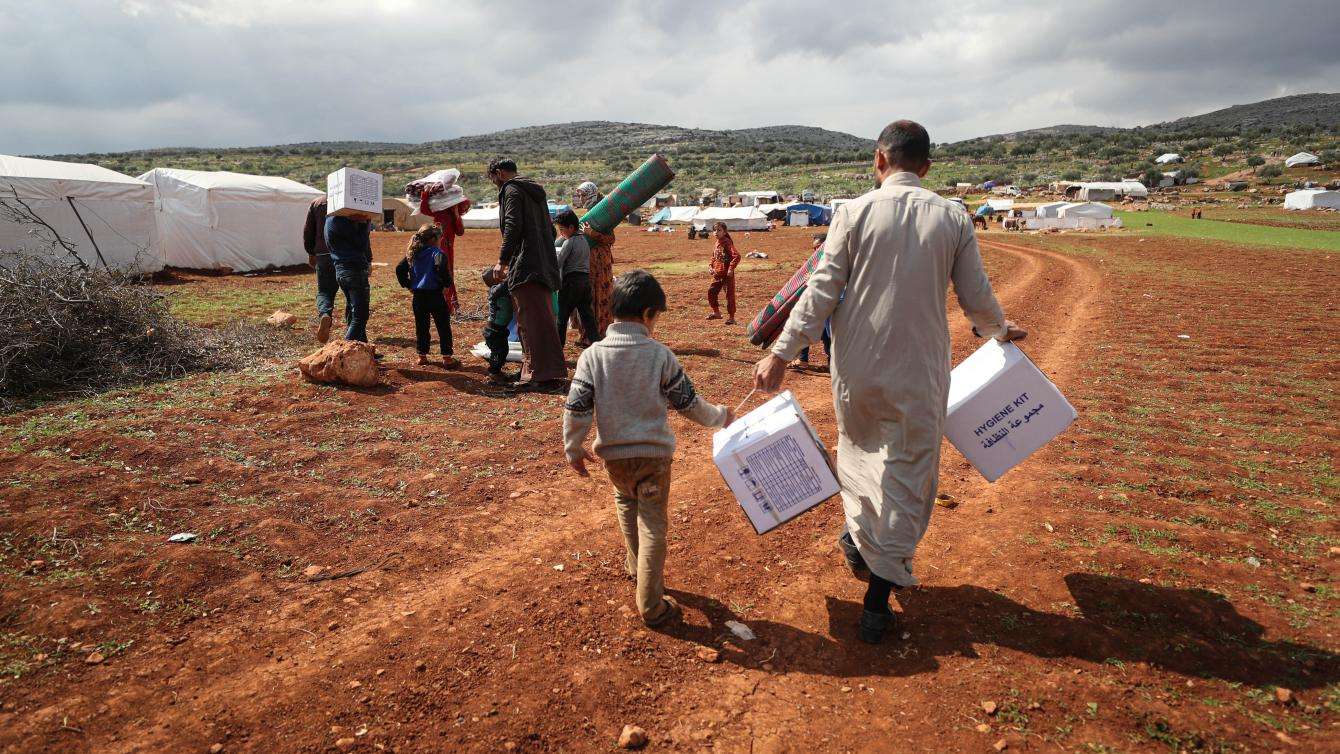 In March, MSF distributed essential items, including blankets and hygiene kits, at a camp for internally displaced people in Idlib governate, in Syria. MSF also distributed more than 300 tons of heating materials to people living in 21 camps and settlements across the region. A military offensive by the Syrian government and its allies uprooted almost a million people in the Idlib region between December 2019 and March 2020. Syria 2020 © MSF 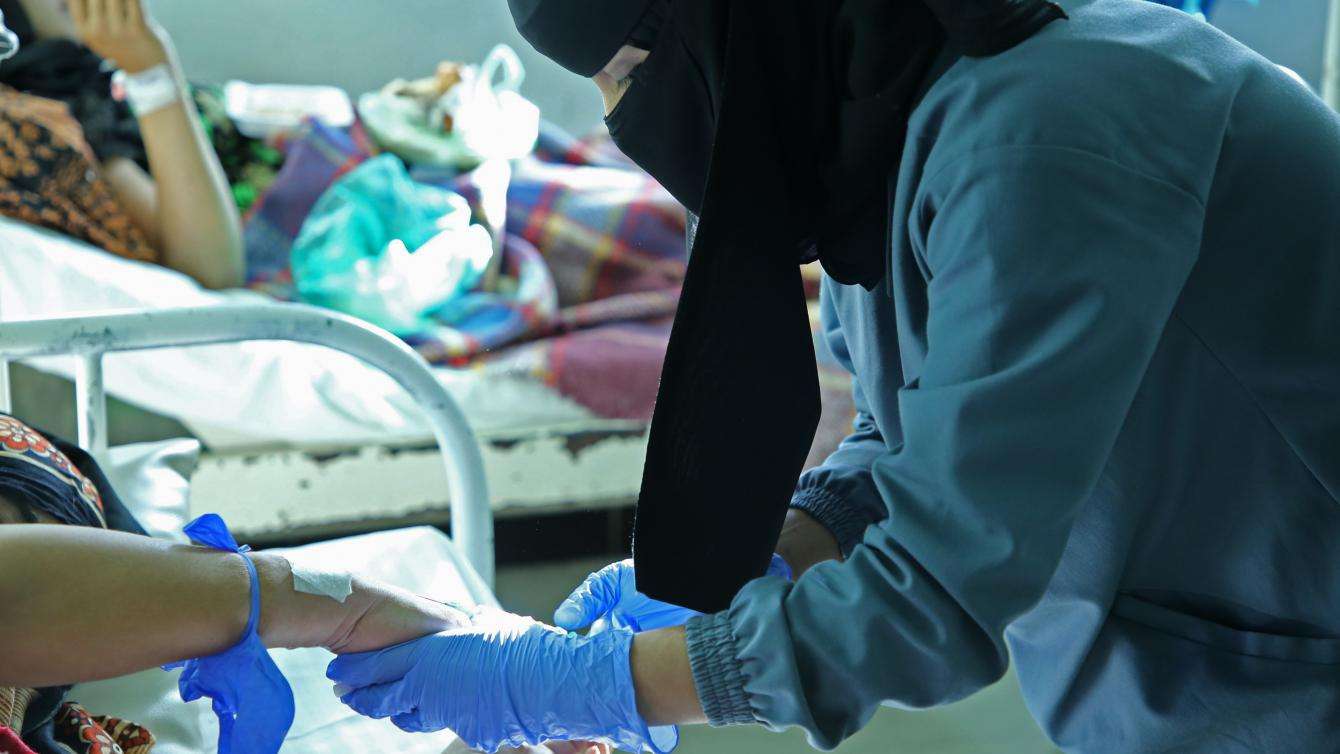 Nurse Raida treats a patient at MSF's Mother and Child Hospital in Taiz, Houban, in Yemen. “I didn’t choose this profession, but it was when I started practicing the actual duties of a nurse that I fell in love with my work,” says Raida. Nurses and midwives at the hospital work tirelessly to care for the patients, even while dealing with their own challenges enduring the prolonged war. Yemen 2020 © Maya Abu Ata/MSF 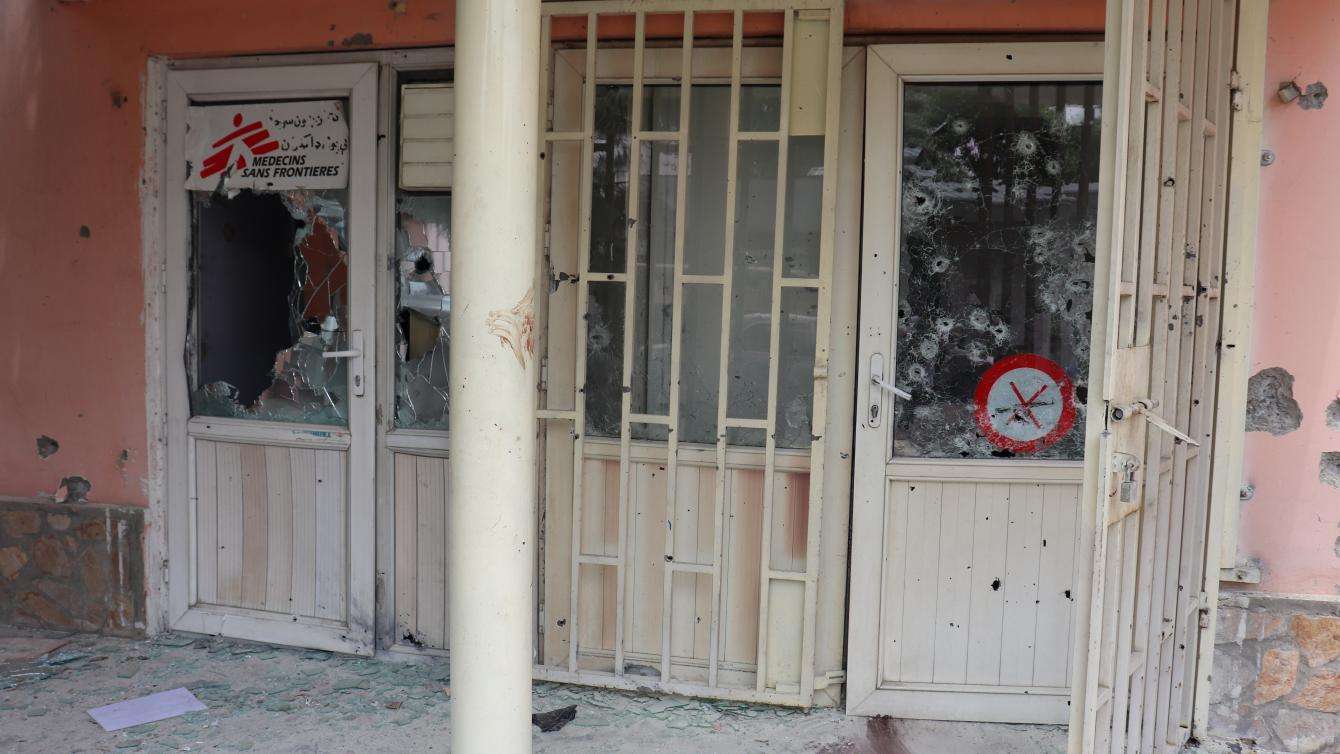 On May 12, armed men launched a horrific attack on MSF’s maternity ward in Kabul’s Dasht-e-Barchi hospital. Among those killed were 15 mothers and an MSF midwife, Maryam Noorzad. The attackers also killed two young children and six other individuals who happened to be present at the time. More than 100 people found shelter in the safe rooms of the facility, including one woman who gave birth to a healthy baby amid the terror attack. Afghanistan 2020 © Frederic Bonnot/MSF 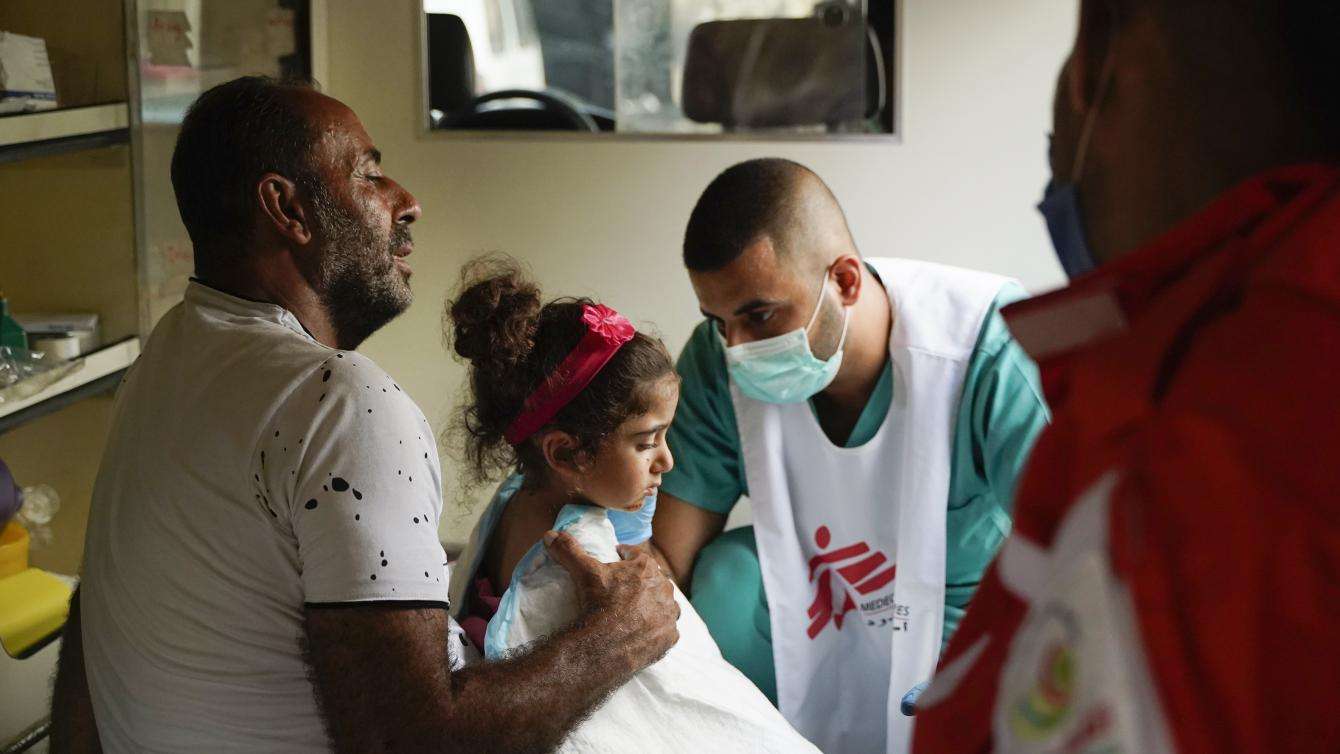 Three-year-old Samar receives wound care at an MSF medical point in Beirut, Lebanon, following a massive explosion that tore through the port area on August 4. Samar and her father were just leaving their building when the blast went off. The child suffered facial injuries and burns. Lebanon 2020 © Mohamad Cheblak/MSF 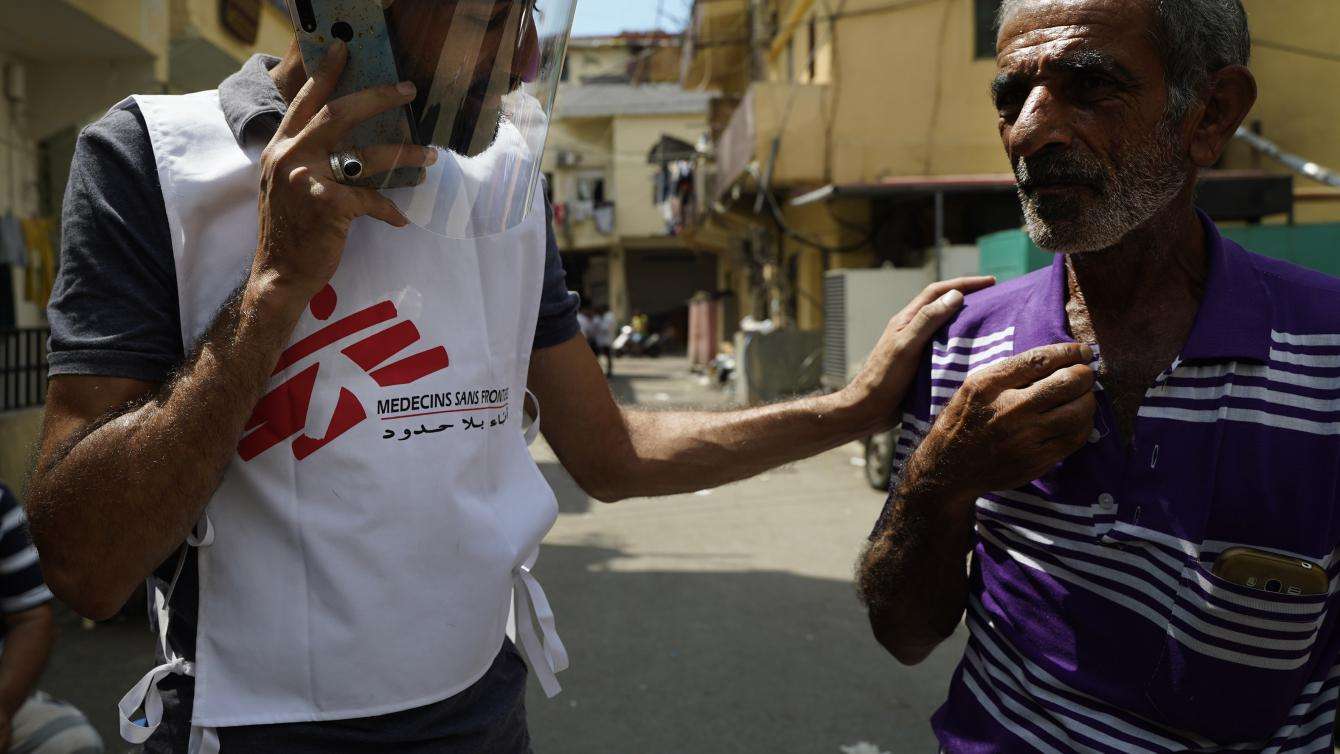 After the deadly explosion in Beirut this August, MSF teams carried out door-to-door visits in Karantina—a crowded neighborhood that was once a quarantine area for immigrants and refugees arriving by sea. We provided wound care and mental health care for people affected by the disaster, as well as continuity of care for people with chronic diseases. Lebanon 2020 © Mohamad Cheblak/MSF 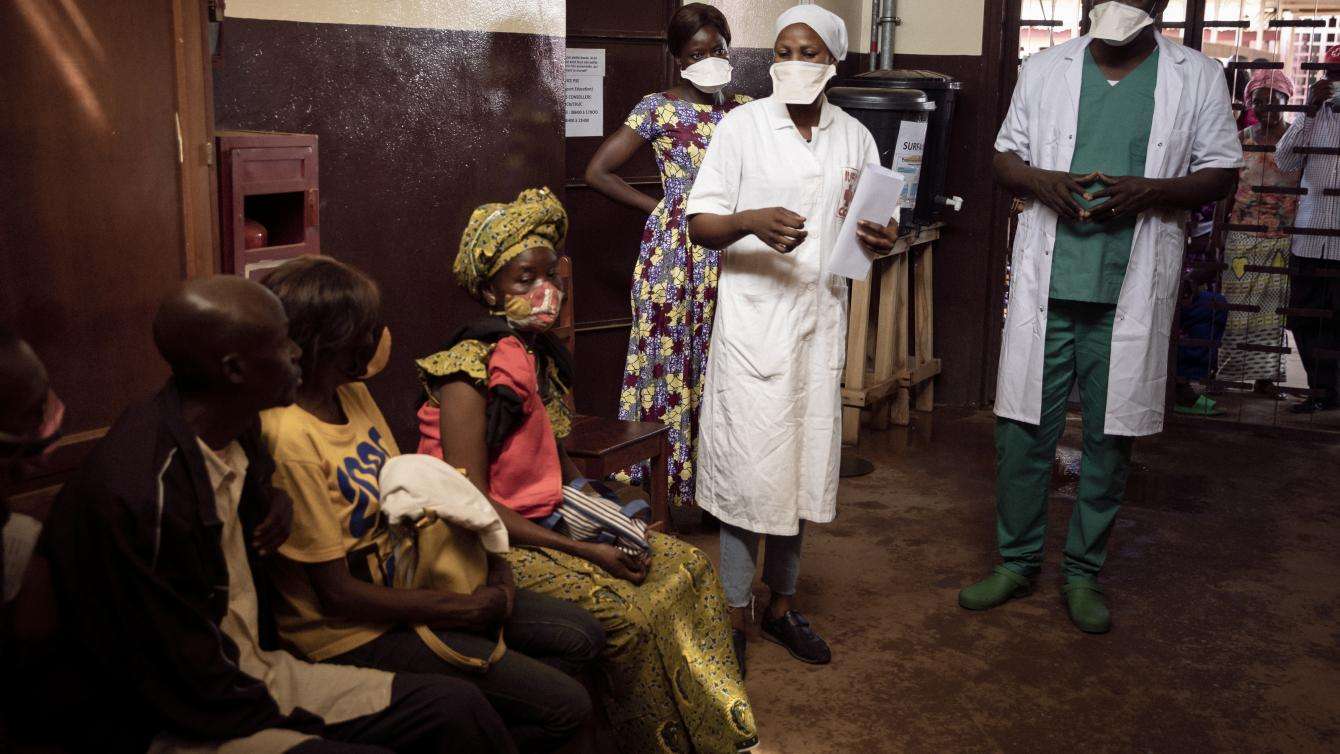 Fidèle Marc Hounnouvi, an MSF psychologist from Benin, speaks with patients living with HIV in the general medical ward at the Centre Hospitalier Universitaire Communautaire in Central African Republic. “I’m here to work with the patients who are tired, repress their feelings, or lose the energy to fight to survive,” he says. “The sessions can help to reinforce adherence to treatment.” Central African Republic 2020 © Adrienne Surprenant/Collectif 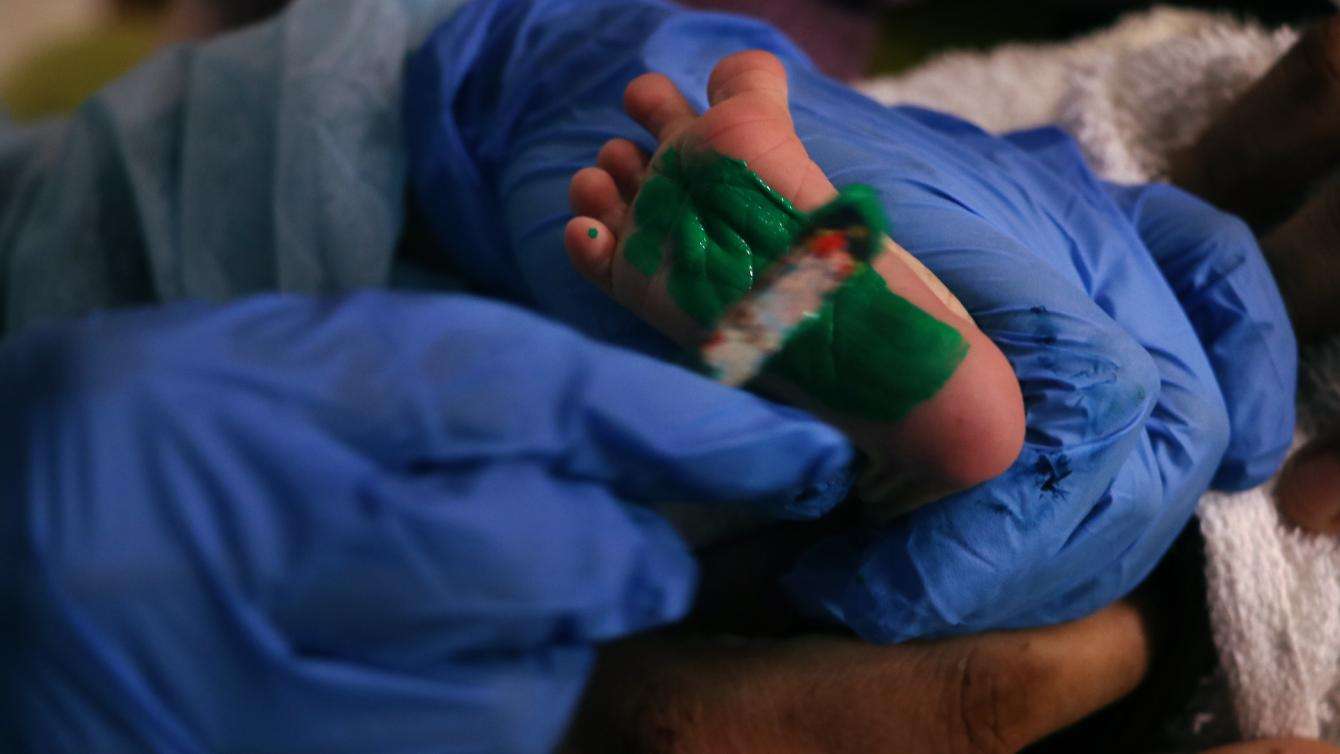 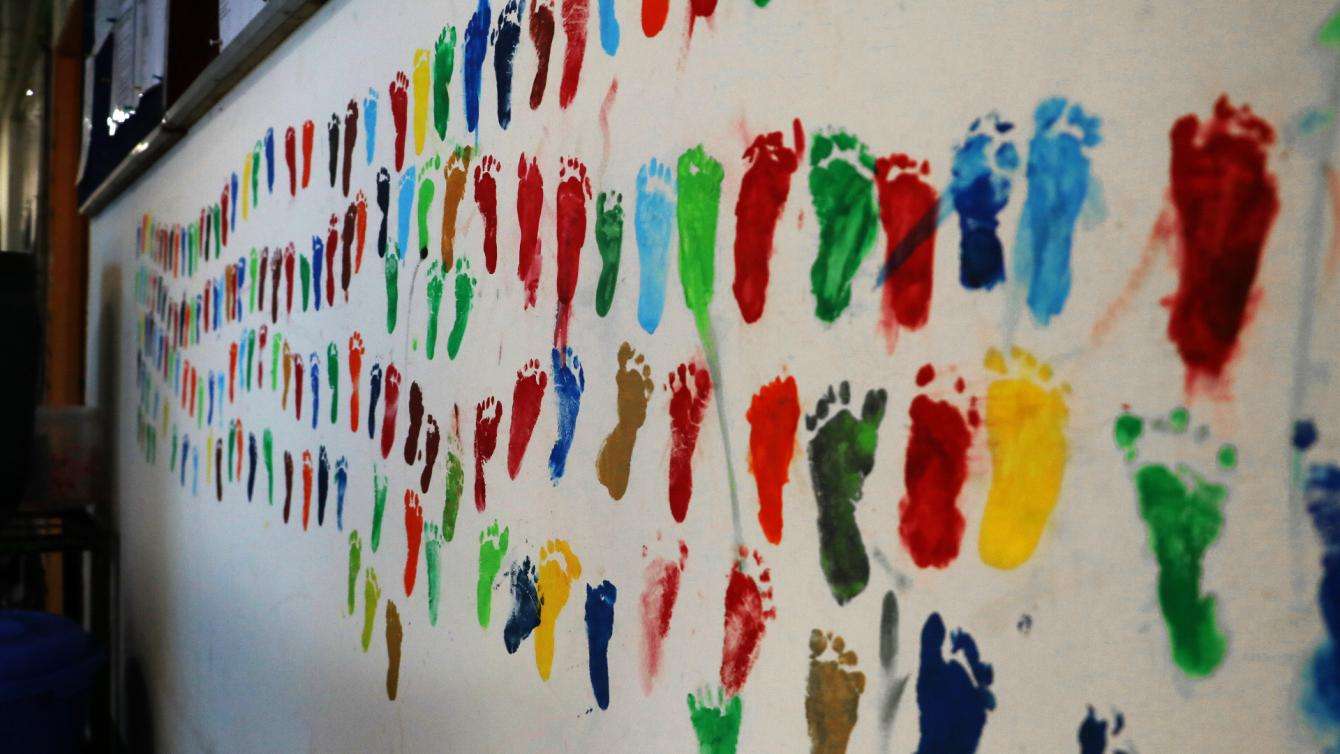 This mural features the footprints of babies that are discharge after treatment in the MSF Goyalmara Mother and Child hospital is a specialized facility in Cox’s Bazar district, now home to nearly 900,000 Rohingya refugees forced to flee Myanmar. Bangladesh 2020 © Hasnat Sohan/MSF 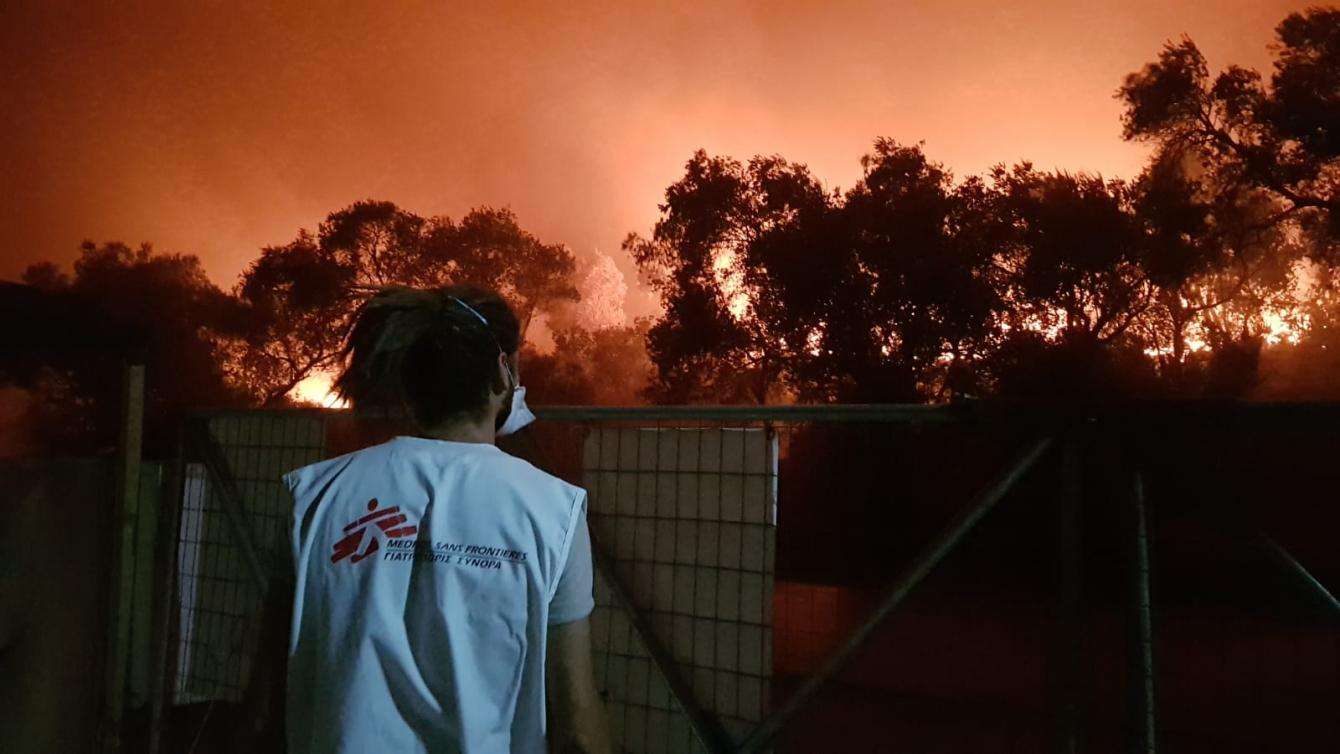 In September, a series of fires destroyed Moria refugee camp on the island of Lesbos, leaving some 12,000 people with no safe place to stay in the middle of a COVID-19 outbreak. MSF continues to provide medical and mental health care to tens of thousands of refugees and asylum seekers trapped on the Greek islands. We are calling on European leaders to evacuate vulnerable people and end harmful migration policies. Greece 2020 © MSF 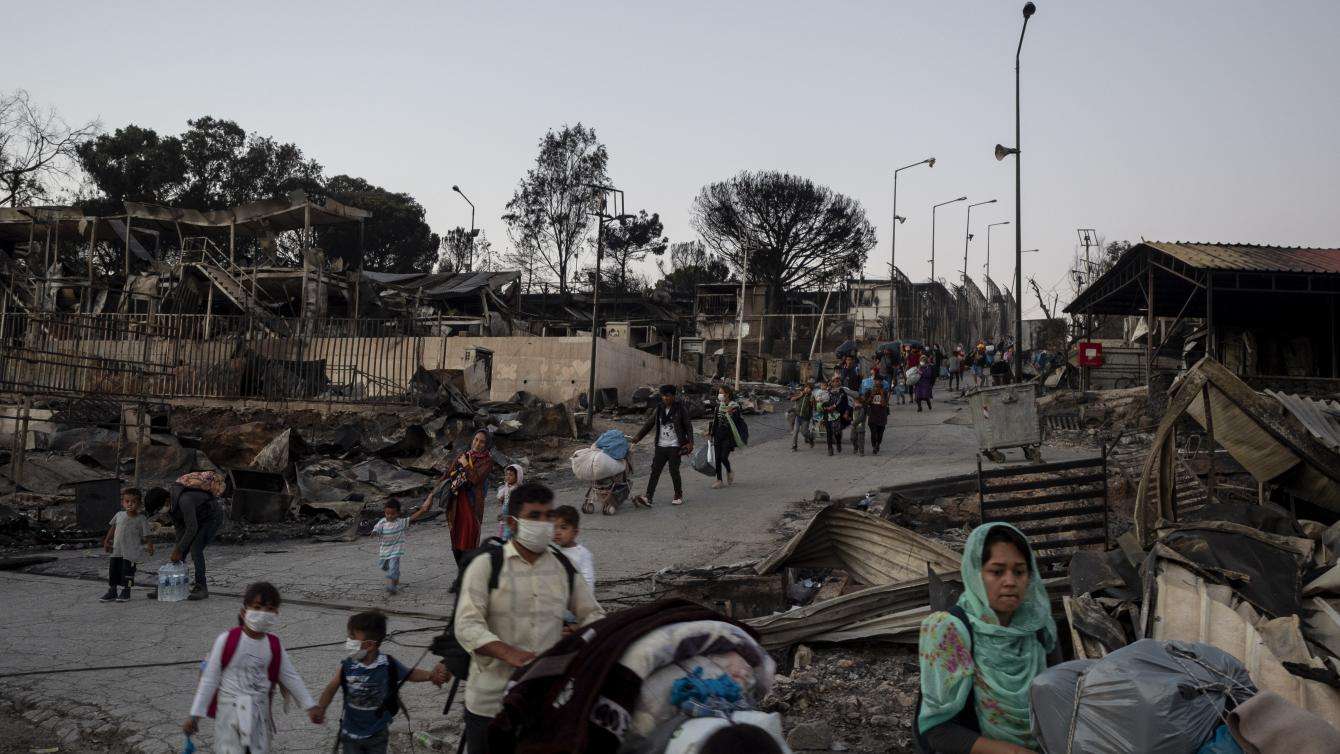 Refugees and asylum seekers leave Moria camp on the Greek island of Lesbos, the day after a fire destroyed most of it. “Our teams saw the fire spread across Moria and rage all night long. The whole place was engulfed in flames, we saw an exodus of people from a burning hell with no direction,” says Marco Sandrone, MSF field coordinator in Lesbos.“Children were scared, and parents are in shock." According to Aurelie Ponthieu, MSF Humanitarian Advisor on Displacement, “The years-long orchestration of human suffering and violence produced by European and Greek migration policies are to blame for the fire.” Greece 2020 © Enri Canaj / Magnum Photos for MSF 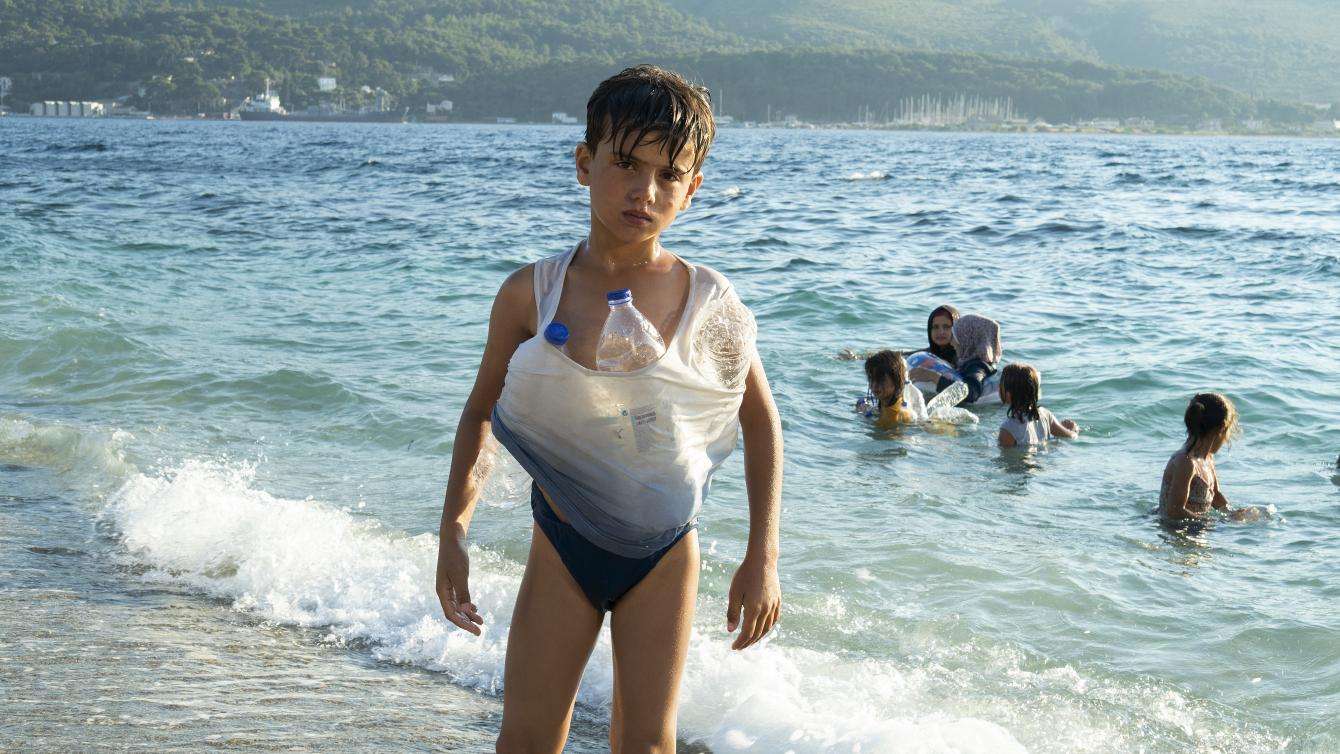 A young Syrian boy who lives at the Vathy refugee camp on the island of Samos is learning how to swim. At the camp, 4,314 people live in and around a site built for just 648, mostly in makeshift tents without access to showers and proper sanitation. According to Lindsay, MSF psychiatrist on the island, "The protracted containment in poor living conditions and ongoing uncertainty regarding asylum claims contribute to exacerbate mental health difficulties among residents of the camp, many who have already experienced traumatic events in their country of origin or during their journey to Greece.” Safe and stable living conditions are a necessary part of the recovery process. Greece 2020 © Enri Canaj / Magnum Photos for MSF 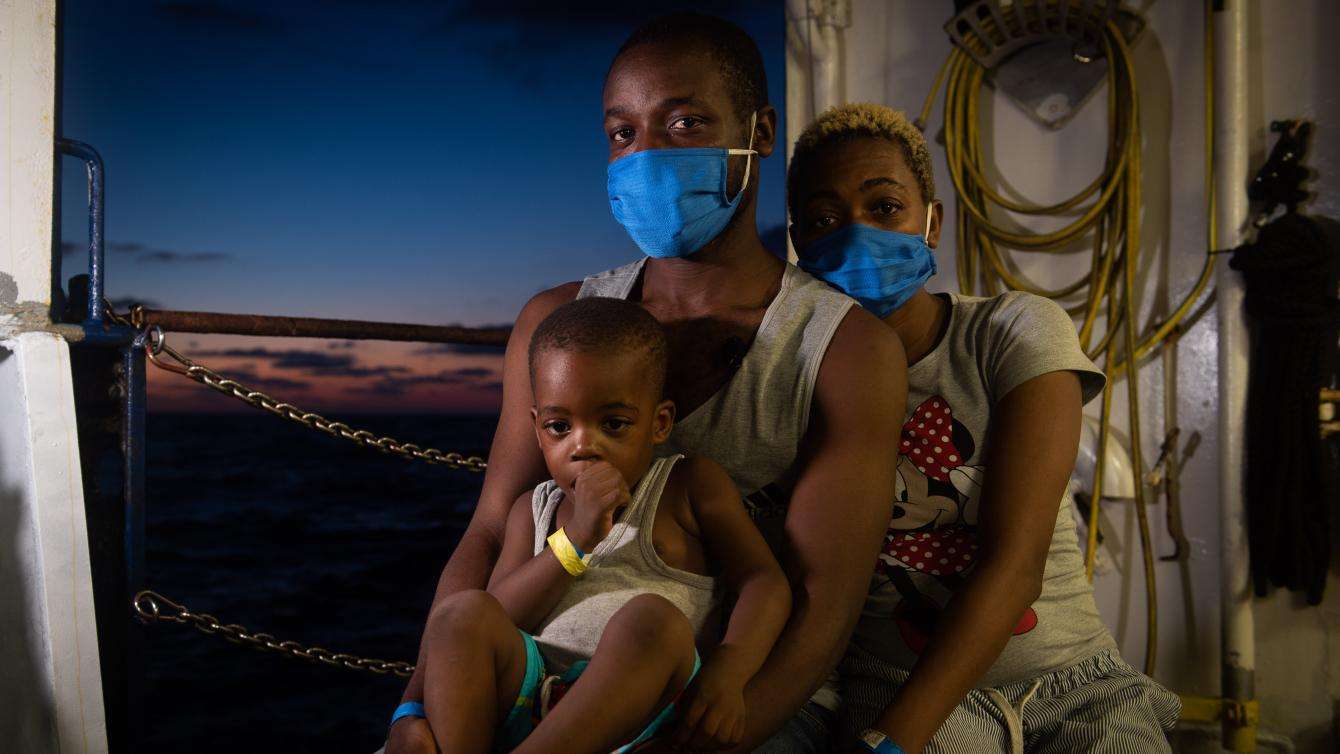 Mouliom Souleman and his family were taken aboard a search and rescue ship run by MSF in partnership with Sea-Watch on August 23. Originally from Cameroon, Souleman fled Libya in search of safety in Europe. Souleman wrote that on the day of the rescue, “I found a smile again. That is after more than three years of torture, forced labor, sleepless nights…. Libya for me is hell on earth.” Central Mediterranean Sea 2020© Chris Grodotzki/Sea-Watch.org 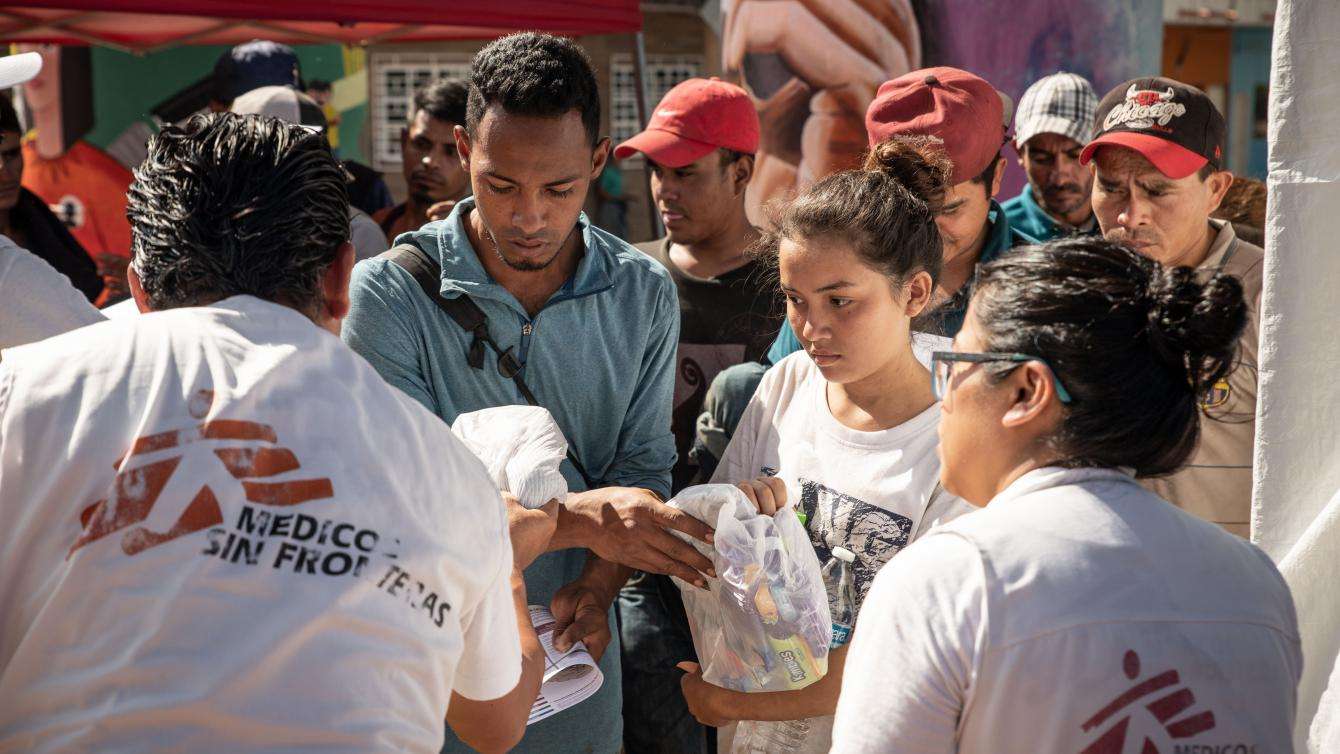 In Coatzacoalcos, Veracruz, our teams distribute water bottles and hygiene kits to migrants and refugees. We also provide medical and psychological care to people all along the migration route through Mexico. Increasingly harsh migration policies imposed by the United States and Mexico have left many migrants and refugees stranded in makeshift settlements and overcrowded shelters. People on the move face threats to their health and safety, now exacerbated by COVID-19. Mexico 2020 © Léo Coulongeat/Hans Lucas 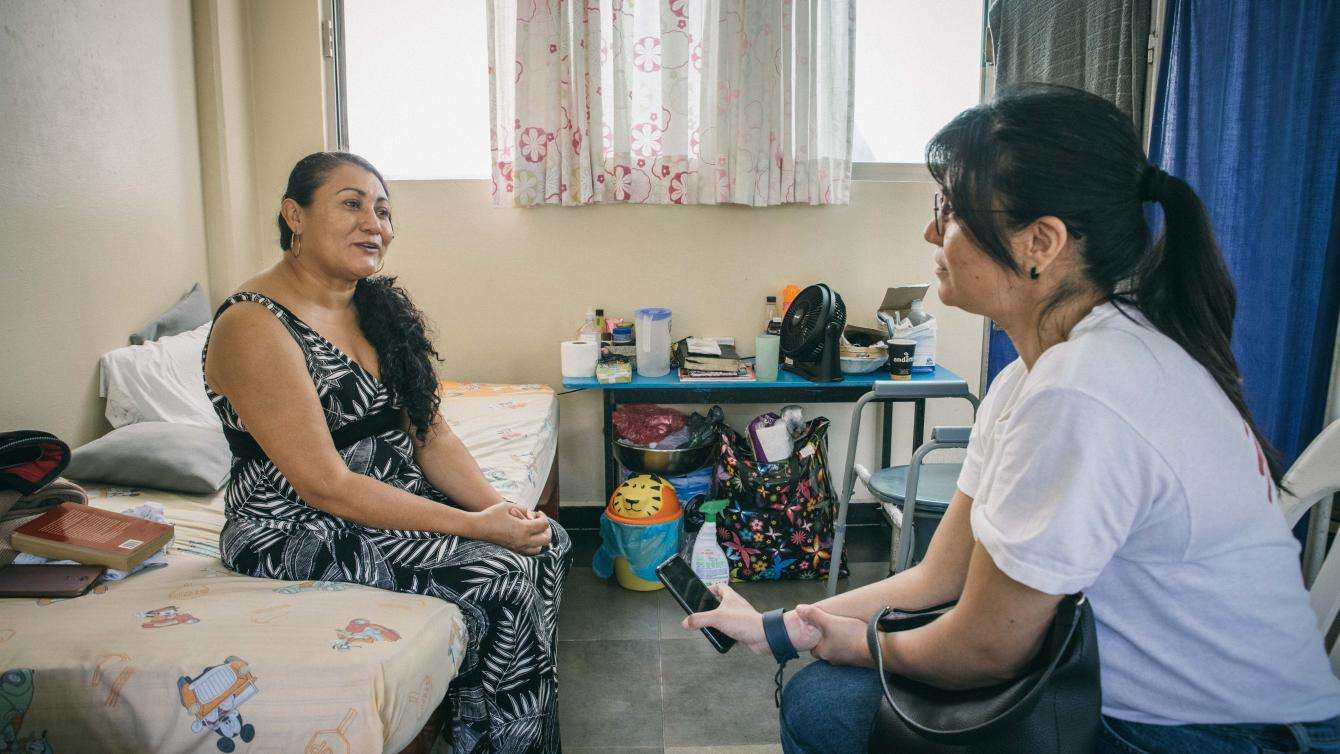 Lurvy Elisa Ramírez, is a Honduran woman who was hit by the train when she was fleeing from the National Guard and suffered the amputation of her legs. The Mexican authorities denied her assistance. After several sessions with the MSF psychologist, Lurvy is more optimistic about her future. "I feel calmer. I know that I no longer have my legs, but I'll have my prosthetics. I'll restart the processing of my papers and I hope they will grant me refuge because I will be killed if I return to Honduras." Mexico 2020 © Léo Coulongeat/Hans Lucas 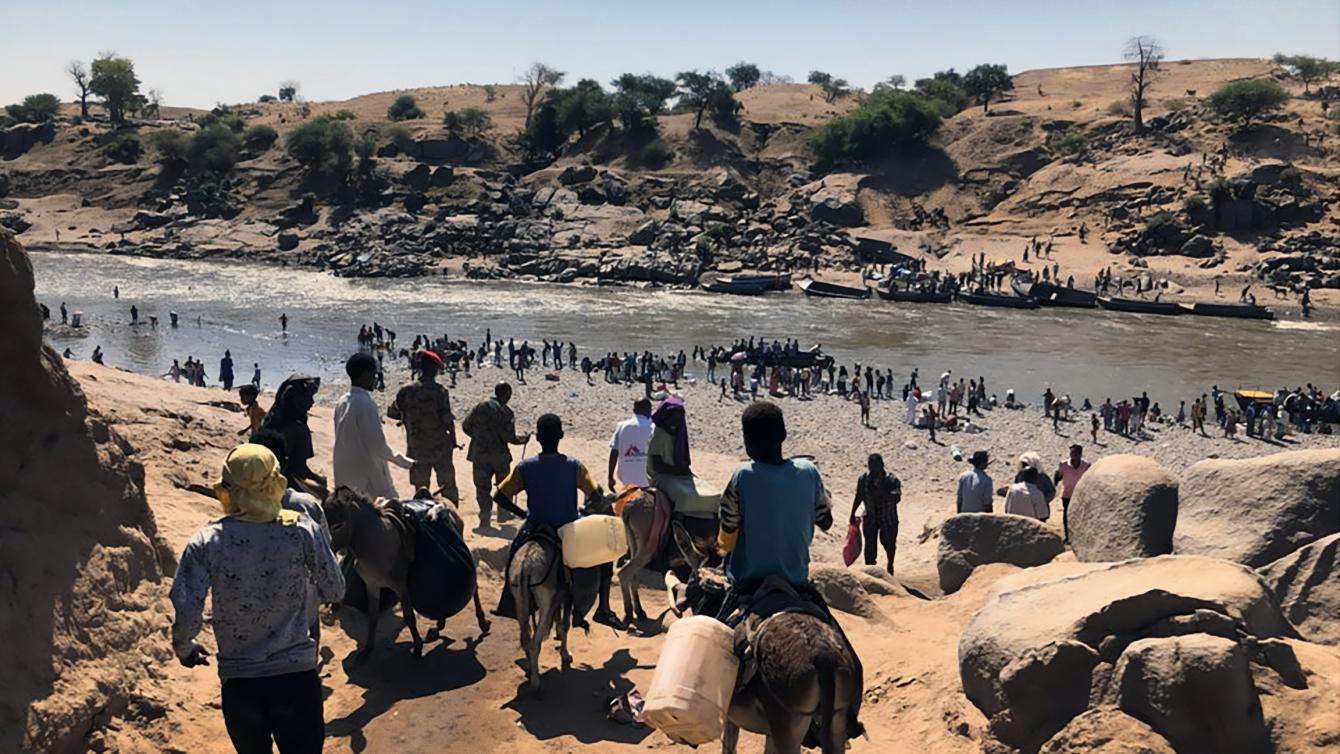 The Hamadayet border crossing, where refugees from Ethiopia cross the river into Sudan. New arrivals bring whatever belongings they can carry with them; some have their livestock, others left with nothing. The displacement of more than 40,000 Ethiopian refugees to Sudan began when Ethiopia’s prime minister responded to the attack of a military base by ordering military action against the Tigray People’s Liberation Front (TPLF) in northern Ethiopia. The escalating conflict is quickly becoming a humanitarian emergency where tens of thousands are already in need of physical and mental health care, as well as clean drinking water and proper sanitation. Ethiopia 2020 © Jason Rizzo/MSF 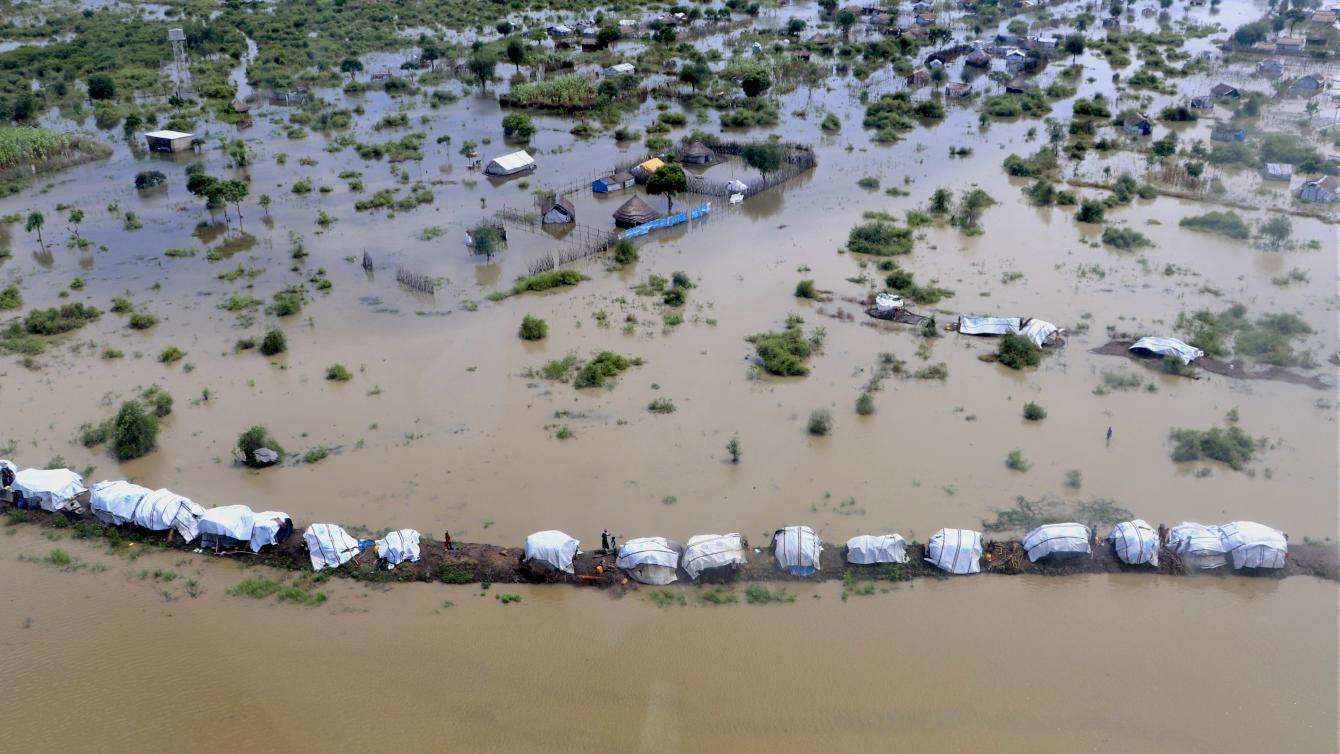 This year’s floods in the Greater Pibor Administrative Area are happening against the backdrop of multiple emergencies including COVID-19, increased violence and fighting, a growing economic crisis, and high levels of food insecurity. The needs for medical care are increasing with a sharp rise in malaria cases and fears of outbreaks of other diseases. South Sudan 2020 © Tetiana Gaviuk/MSF 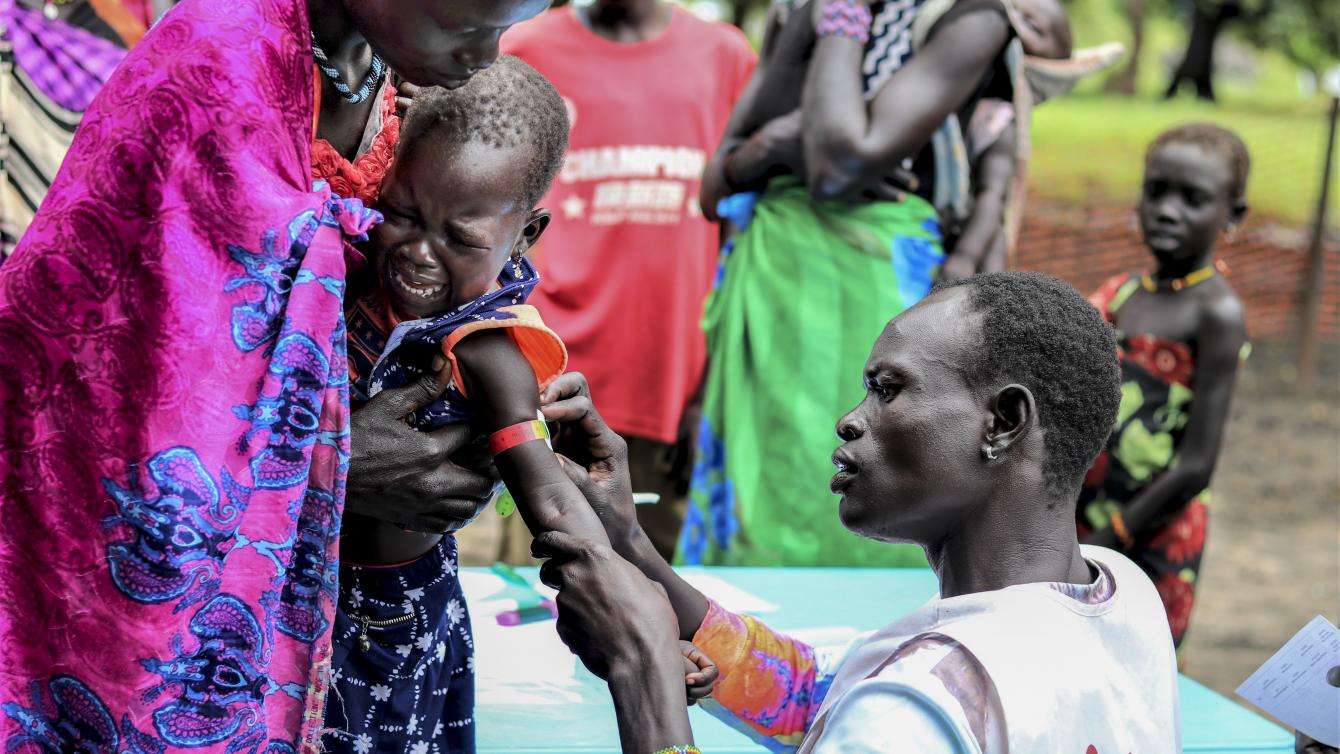 An MSF mobile clinic provides medical consultations to the people of Lukurunyarg in the Greater Pibor Administrative Area after flooding made the roads impassable. “This year, water reached places that weren’t flooded last year,” says Nyabuok Lony Ruot, the relative of a patient at the MSF hospital in Old Fangak town. “All the crops are in the water. We came to the hospital by canoe.” In some places, the high waters make walking for medical care impossible and most people cannot afford to pay for a canoe, so MSF is using its boat as an ambulance. South Sudan 2020 © Tetiana Gaviuk/MSF 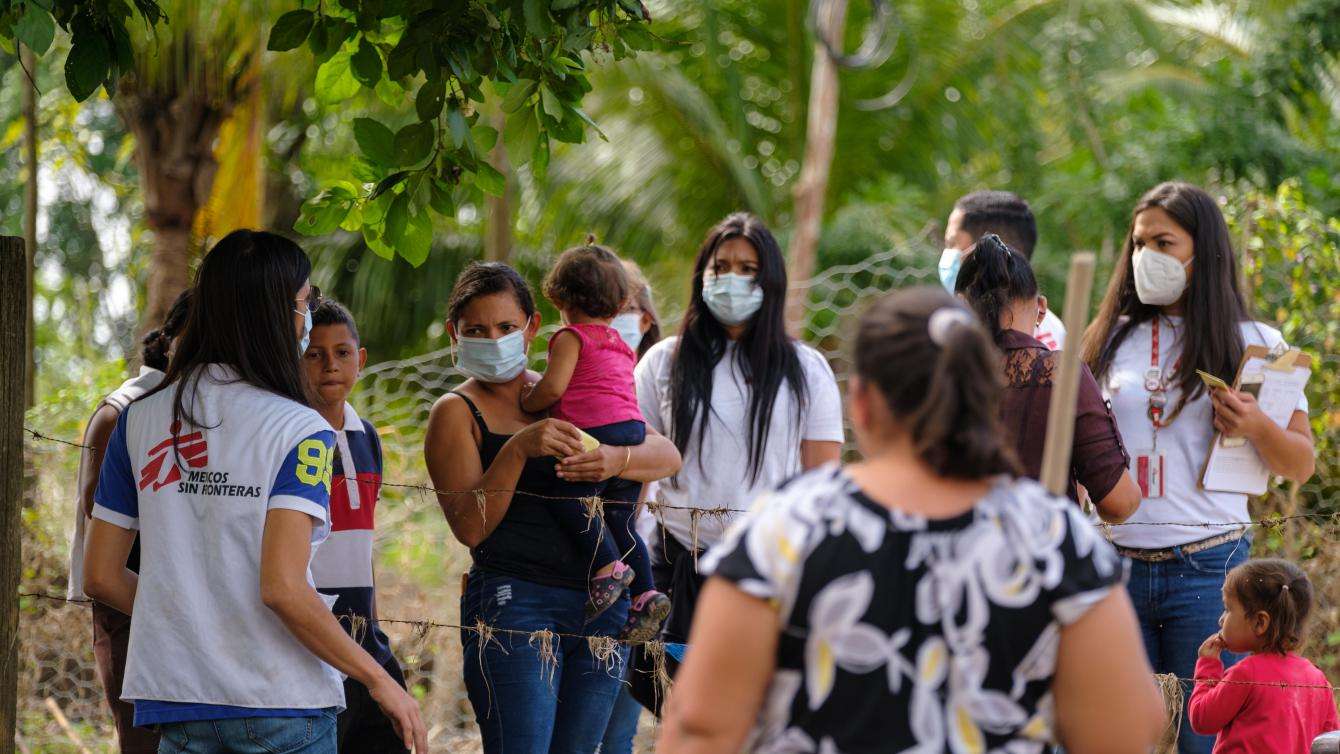 Hurricanes Eta and Iota have left Honduras in a catastrophic situation. MSF is providing medical care (including family planning) and mental health care, alongside health promotion and disease prevention activities with a focus on community shelters and people living on the streets. Priorities include distributing non-food items, COVID-19 protection and prevention equipment, and clean water in Choloma and the surrounding areas in Cortés department. Honduras 2020 © Deiby Yanes/MSF