Years of conflict have uprooted millions and caused widespread suffering

Share in FacebookShare in TwitterShare in LinkedIn
What’s happening in Syria?
How we’re helping in Syria
What can I do to help in Syria?

Learn more about how we are responding to the coronavirus pandemic in Syria.

War continues to rage in Syria, leaving millions of people in desperate need of medical and humanitarian assistance.

Civilians, civilian areas, and civilian infrastructure, including medical facilities, came under direct fire again. Thousands of people were killed or wounded, and many more driven from their homes. Doctors Without Borders/Médecins Sans Frontières (MSF) continued to operate in Syria but our activities were severely limited by insecurity and access constraints.

Our teams conduct independent evaluations to determine medical needs and what assistance we provide. In areas where access could be negotiated, we ran or supported hospitals and health centers and provided health care in displacement camps.

In areas where no direct presence was possible, we maintained our distance support, consisting of donations of medicines, medical equipment, and relief items; remote training of medical staff; technical medical advice, and financial assistance to cover facilities’ running costs. Learn how you can best help in Syria and other countries.

Thousands of people displaced by the fighting around Damascus, Homs, and Daraa settled in the northern governorates of Idlib and Aleppo in 2018.

We also organized mass vaccination campaigns in and around the camps, and supported vaccination programs in health facilities.

We supported primary and secondary health care in several hospitals and clinics around Idlib and Aleppo with a variety of services such as outpatient and inpatient departments, emergency rooms, intensive care units, operating theatres, blood banks, maternity wards, and treatment for NCDs and thalassemia, all in coordination with local authorities.

Meanwhile in Atmeh, in Idlib, we continued to run a specialized burns unit that provides surgery, skin grafts, dressings, physiotherapy, and psychological support.

An average of 150 procedures a month were performed in 2018, and severe or complex cases were referred to Turkey by ambulance. When the Atmeh camps were hit by severe flash floods in December, we distributed tents, blankets, and other relief items to the worst affected.Due to changes on the ground and shifts in needs, some projects in the northwest were handed over to local authorities in 2018, while others were managed remotely. In northern Idlib, however, we were able to establish co-management partnerships with three reference hospitals. This entailed developing medical strategies and

protocols with the hospital directors, supporting all services, donating drugs and other medical supplies, and covering the running costs, including staff salaries.

MSF also supported lifesaving medication and follow-up for almost 100 patients in Idlib who had received kidney transplants. Please donate to support our work in Syria and other countries around the world now.

Fighting continued in parts of Deir ez-Zor governorate, resulting in further displacement and civilian casualties, with many war-wounded arriving at MSF facilities in northeast Syria.

Elsewhere in the governorate, and in Hassakeh and Raqqa, the situation was relatively calm and people previously displaced by heavy fighting and offensives in Raqaa and Deir ez-Zor began returning home—to areas where the health infrastructure had been largely destroyed and entire cities and villages were littered with landmines and unexploded remnants of war.

Our teams in Hassakeh and Raqqa treated hundreds of patients wounded by landmines, booby traps, and explosive ordnance in 2018.

Syria: Voice from a hospital basement in eastern Ghouta

We helped to rehabilitate health facilities in Hassakeh, Raqqa, and Deir ez-Zor governorates and supported a wide range of services, including surgery, physiotherapy, maternal, reproductive, and mental health care, pediatrics, vaccinations, blood banks, and treatment for NCDs, in coordination with the local health authorities.

We also ran a thalassemia program at Tal Abyad hospital, through which our team performed 2,606 blood transfusions and started 226 patients on chelation therapy.

In 2018, MSF was one of the only organizations providing medical assistance inside the city of Raqqa, where we ran a primary health care unit and a stabilization point.

We started rehabilitating parts of Raqqa national hospital, continued to support the pediatric, maternity and surgical wards of Tal Abyad hospital to the north, and supported or administered vaccinations campaigns across the governorate. When you donate to support our work to help in Syria and other countries, you're helping provide lifesaving medical care to the people who need it most.

As the battle for eastern Ghouta intensified, we struggled to assist communities who had been under siege for more than five years.

In the two first weeks of the offensive, between February 18 and March 3, the makeshift hospitals and medical centers that MSF was supporting from neighboring countries reported 4,829 wounded and 1,005 dead. The influxes of dead and wounded continued, but the situation became too chaotic to collect reliable data after that point.

At the start of the battle, we were supporting 20 medical facilities—some almost entirely, others as one partner alongside other NGOs. By the end, all but one of these facilities had been destroyed or abandoned and our activities in the area came to an end.

North of Homs city, we provided remote support to eight rural hospitals and health centers until May, when the warring parties reached a settlement and the Syrian government took administrative and military control of the area, at which point the medical networks we had been assisting ceased to exist.

In June, as the control of Darra and Quneitra changed hands, we had to end our support to eight health facilities in the region, where we had been offering medical, technical, and logistical assistance to improve access to care for displaced people and local communities. We set up a mental health helpline at the end of 2017, and also ran a remote ‘telemedicine’ service for the first six months of 2018.

What can I do to help in Syria?

Join the MSF movement to help in Syria and other countries 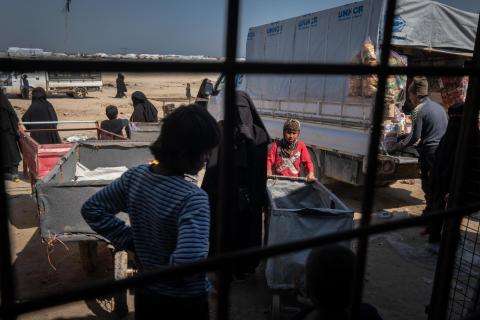 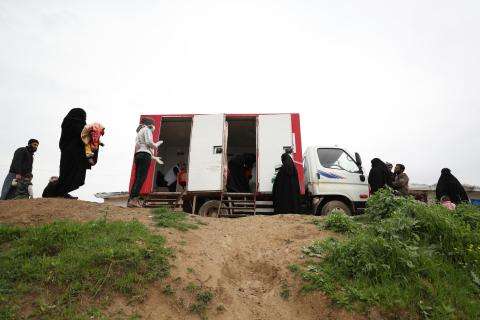 COVID-19: Bracing for a perfect storm in Idlib, Syria