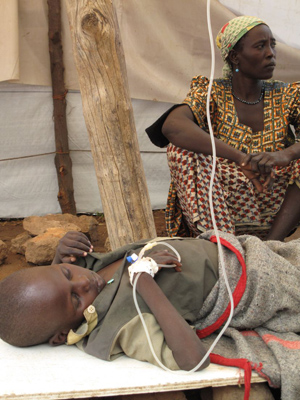 Nearly 5,000 cases of cholera have been registered in Chad since an outbreak hit the country in August. The World Health Organization has reported that 147 people have died from cholera as well. Doctors Without Borders/Médecins Sans Frontières (MSF) teams are on the ground responding to this emergency situation, which is happening at the same time as a severe nutrition crisis.

MSF teams have set up several cholera treatment centers (CTCs) in the Chadian regions of Lac, Mayo Kebbi West, and Mayo Kebbi East, as well as in the capital, N’Djamena. “The cholera outbreak is yet another crisis to hit this already weakened population," said Dr. Kodjo Edoh, MSF head of mission in Chad. “For the whole year, the people in Chad have been facing one emergency after the other—first measles outbreaks, then a sharp increase in malnutrition up to emergency levels, followed by floods, malaria, and cholera.”

In Pala, for example, an area near the border with Cameroon, the first patient was reported in early September. Through the end October, a total of 886 patients had been registered in the Pala health district. The worst week saw 199 cases. At the moment, the peak seems to have passed, but the epidemic is not over.

One factor is likely the movement of people between communities and across borders. “In one of the most affected communities, in Goy Goudoum, about 34 kilometers (20 miles) from Pala town, this is the first outbreak in 20 years,” said Oscar Niragira, medical coordinator for MSF in Chad. “As the outbreak in neighboring Cameroon is still active, the cross-border movements of people [has] combined with poor living conditions, lack of access to clean water, and poor awareness of the disease. All these factors are contributing to the spread of the disease.”

In treatment centers such as the one in Goy Goudoum, a rural village with poor living conditions and gold mining activities, MSF teams and staff from the Ministry of Health provide patients with oral rehydration salts or, for the most severe cases, intravenous treatments. “MSF is one of the few medical actors supporting the Ministry of Health in its response to the cholera outbreak and the ongoing nutrition crisis," says Dr. Edoh. “The authorities are trying the best they can with what they have, but health structures are chronically under-supported and they need the assistance of more organizations to help them in the field.”

MSF has been working in Chad since 1981 and is currently responding to emergencies in 11 regions across the country, as well as to a cholera outbreak and malnutrition in the capital N'Djamena.