MapSwipe, available free from the App Store and Google Play, enables users to view and swipe through satellite images of remote areas to identify features such as settlements, roads and rivers. The information gathered will help build maps for aid workers to use in largely unmapped but crisis-prone countries, such as South Sudan, Sierra Leone and the Democratic Republic of Congo.  The new app is part of the “Missing Maps” project, an open collaboration that aims to map vulnerable places in the developing world.

“There are vast amounts of unmapped world out there and the human eye is still the most powerful tool we have to spot where people are living,” said Pete Masters, MSF’s coordinator for the Missing Maps project. “It currently takes mappers months to process all of these images, but we hope members of the public will use this app to literally put vulnerable people on the map more quickly.” 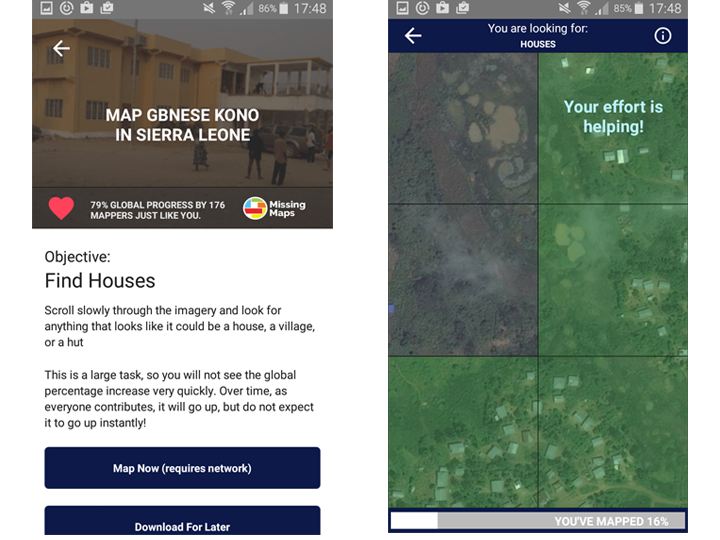 During a humanitarian crisis, it is essential to know where vulnerable people are located. Yet millions around the world are not represented on any accessible map. When MSF responds to major epidemics with mass vaccination campaigns, teams must cover enormous areas, as occurred last year during a vast measles outbreak in the Democratic Republic of Congo. With the help of MapSwipe users, MSF hopes to provide mass vaccination coordinators an immediate snapshot of population clusters, which will ensure medical teams are sent to areas most in need, maximize vaccination coverage, and ultimately save lives.

MapSwipe is designed for ease-of-use, making it possible to contribute to mapping efforts a few minutes at a time. Mapping assignments can even be downloaded and completed offline.

“Anyone with a phone or tablet can now help medical professionals get vital care to people in need in remote places around the world,” Masters said. “We also think it will be addictive and fun. We don’t think anyone has done anything like this before.”

Missing Maps is a collaborative project of a large and committed community of aid organizations, academic institutes, companies and individual mappers. The maps created will be available for use by everyone through OpenStreetMap, benefiting humanitarian organizations like MSF as well as local people.