MSF medical teams have treated more than 200 people suffering from symptoms consistent with cholera in Port-au-Prince. 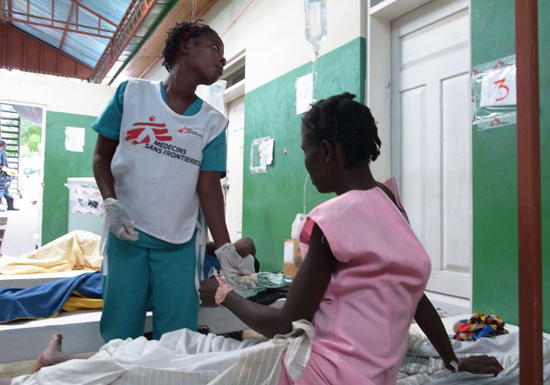 Over the past three days, Doctors Without Borders/Médecins Sans Frontières (MSF) medical teams supporting Haitian Ministry of Public Health facilities and working in their own independent medical structures in Haiti’s capital, Port-au-Prince, have treated more than 200 people suffering from severe diarrhea, a clinical symptom consistent with cholera.

Even if very few of these cases have been confirmed as vibrio cholera through laboratory analysis, the severe symptoms of the patients treated in these facilities is extremely concerning. MSF staff are treating all cases according to standard cholera treatment protocols, with oral or intravenous rehydration and antibiotics as necessary.

At all four of MSF’s own facilities in Port-au-Prince, teams have treated an increasing number of suspected cases since this past Saturday, November 6. These facilities have more than 300 beds already set aside for treatment in cholera treatment centers (CTCs). MSF is currently constructing an additional 320-bed CTC in the Sarthe neighborhood, where the organization already maintains a post-operative care facility.

“The increasing numbers of cases of suspected cholera in our facilities throughout Port-au-Prince are certainly alarming,” said Stefano Zannini, MSF head of mission in Haiti. “Cholera is a highly treatable and preventable disease, especially once symptomatic patients are treated in a controlled, isolated environment like a CTC. The presence of CTCs in cholera-affected areas can relieve pressure on local hospitals and health structures, greatly reducing the risk of infection among pre-existing inpatients and the wider community.”

While continued public awareness campaigns on preventative measures—such as hand washing—remain important, access to immediate treatment is an essential part of lifesaving initiatives to respond to a cholera outbreak. The creation of oral rehydration points in affected communities and CTCs is critical to averting unnecessary deaths.

The populations living in many of the affected areas of the city have limited access to safe drinking water and sanitation services that are necessary for effective preventative measures. In the Cite Soleil neighborhood, for example, MSF provides approximately 280,000 liters of water per day, enough drinking water for an estimated 14,000 people but far below the requirements of the neighborhood’s inhabitants.

Two Haitian Ministry of Health hospitals in Port-au-Prince are also receiving support from MSF. A 20-bed CTC has also been set up in Leogane, where MSF already runs a hospital. In addition to MSF’s 3,000 staff members working in Haiti, 75 international staff and more than 400 national staff are detailed to cholera intervention activities.

Responding to Cases in the North

As of now, MSF teams have treated more than 6,400 patients suffering from acute diarrhea nationwide, including a large proportion suffering from severe dehydration, symptoms typical of cholera.

MSF is supporting two Haitian Ministry of Health hospitals in the Artibonite Region, where the cholera outbreak originated. Medical teams are working in the main hospitals in St. Marc and Petite Riviere. Relevant medical supplies, such as intravenous fluids, catheters, and oral rehydration solution, as well as chlorine for disinfection, are also being provided. But it is outside more populated areas such as these where assistance is especially needed.

To bolster health clinics in some of the more outlying areas in the north and center of the country—in places such as Gros Morne—MSF is supplying IV solution, oral rehydration salts, IV sets, and hygiene materials. Supplies have also been provided to the hospital in the town of Port de Paix in the country’s far north. MSF is preparing cholera treatment centers in Gonaïves and Bassin Bleu.