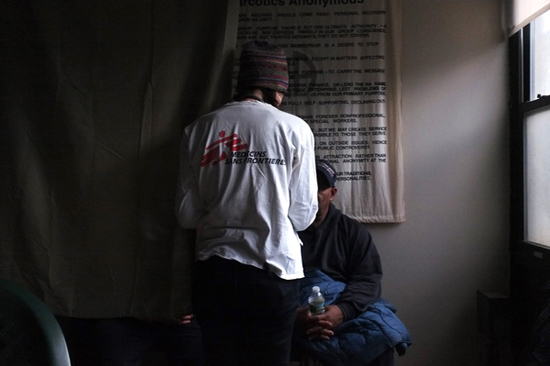 Dr. Lucy Doyle examines a patient in an improvised medical clinic set up by MSF in a community room in a housing complex in the Arverne neighborhood of Rockaway, Queens, in New York City.

In response to the devastation caused by Hurricane Sandy on October 30, 2012, Doctors Without Borders/Médecins Sans Frontières (MSF) provided medical and mental health care to more than 1,000 people uprooted by the storm or trapped in their homes in the New York City boroughs of Queens, Brooklyn, and Staten Island, as well as in Hoboken, New Jersey.

In our exploratory missions to the hardest hit neighborhoods in the immediate aftermath of the storm, MSF teams identified two key areas where medical services were lacking: in evacuation centers where people had fled for safety, and in apartment blocks where many elderly, disabled, or chronically sick people found themselves confined without electricity, water, or access to their medicines.

Soon after, we placed small medical teams—made up of a doctor, nurse, and mental health professional—in five evacuation centers: the FDR High School in Brooklyn and the Susan E. Wagner High School in Staten Island; and at the Wallace Public School, St Matthew’s Church, and Saints Peter and Paul Church in Hoboken, New Jersey.  They worked shifts to ensure 24-hour coverage.

Simultaneously, MSF outreach teams began conducting home visits to people with medical needs identified during door-to-door canvassing carried out by volunteers from local community groups in apartment blocks, some of them 22 stories high and without working elevators, water, or electricity. This activity focused mainly on Hoboken and Rockaway Beach, in Queens, New York, where many patients had not been able to seek outside assistance since the hurricane hit.

The main goal was to ensure that there was continuity in the care residents had been getting before the storm cut them off. The vast majority of patients seen by MSF medical teams in both shelters and home visits were suffering from chronic conditions such as diabetes, heart disease, hypertension, and upper respiratory tract infections—and the main complaint was a lack of access to medicines to treat these diseases. With nearby pharmacies closed due to damage, MSF identified pharmacies in neighboring communities that were able to fill prescriptions and set up a much-needed supply chain.

In the week that followed, local officials and hospitals began expanding their own emergency response efforts to include the provision of medical care in shelters and visits to home-bound people. MSF is therefore now winding down its operations. Medical care in the Staten Island shelter has been handed over to a local organization specializing in providing services to the homeless, who made up the majority of our patients there. A medical team remains on standby in New York City should any needs arise, but with local officials and organizations stepping forward to respond, there is no longer a need for MSF to continue its activities.

Over the past 20 years, a large proportion of MSF’s financial support has come from people living in communities in New York and New Jersey that are struggling with the aftermath of Hurricane Sandy. This short-term medical response has given us the opportunity to witness first-hand the impact of the storm on the hardest-hit communities, and to marshal the willingness of tri-state area MSF volunteers to lend a hand in the storm’s aftermath. Our thoughts remain with our patients and their families, and with all of those in the region who have suffered throughout this time.