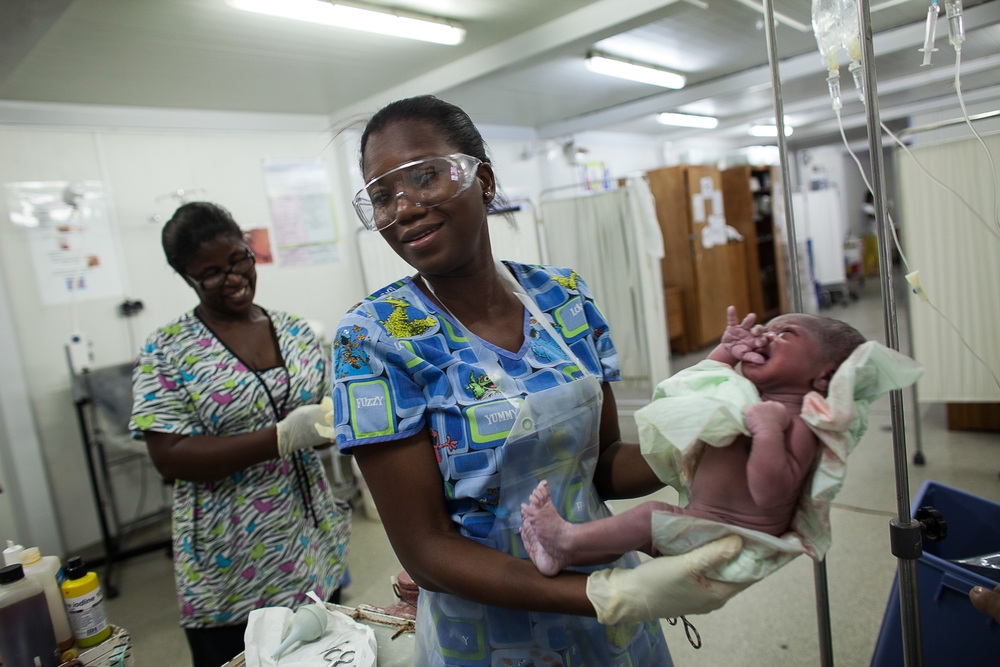 Cherline is already dilated eight centimeters and has very high blood pressure when she arrives at the Doctors Without Borders/Médecins Sans Frontières (MSF) Centre de Référence en Urgence Obstétricales (CRUO) Hospital on October 16. She is taken immediately from the triage area to the delivery room. But her delivery stagnates, her dilation even reducing to seven centimeters. She is moved out of the delivery room to another bed.

She pushes through her labor for seven hours. It is taking a long time, and she explains to the nurse that she does not understand why. But suddenly, it happens: Cherline is brought back to the delivery room, joining two other women also in labor, and gives birth to a healthy baby girl. Her baby is taken to the examination table, wrapped up tight, and placed under warming lights. The medical staff put a yellow ointment under her eye lids to prevent eye infections that can occur during delivery.

The next day Cherline is transferred to another ward for monitoring. Clercy, her husband, visits her regularly, holding the baby with a slightly bewildered look on his face. When the baby cries, he lulls her clumsily, but she does not stop. She is hungry. Cherline breastfeeds her, but finds the first attempts are painful. The nurse gives some advice.

Cherline and Clercy decide to name their daughter Esther Clercy, and the next morning Cherline, Clercy, and Esther go home. Clercy shelters his wife and newborn daughter from the sun with two new umbrellas, still with tags on. They board a tap tap—a type of microbus. It is very crowded, but the passengers move to allow Cherline to sit in the front with Esther. They disembark at the police station, and walk under their umbrellas to a refugee camp built after the 2010 earthquake for people made homeless. It is a long walk on an unpaved road in the midday heat. Clercy takes the baby and walks a little ahead, eager to get her home: a 15 square meter shelter with metal sheeting for the walls and roof. On the right side is a bed, on the left side a small table. Their possessions are in one cupboard. Inside is even hotter than outside.

Cherline lays her baby down on the bed. She is happy to be home. 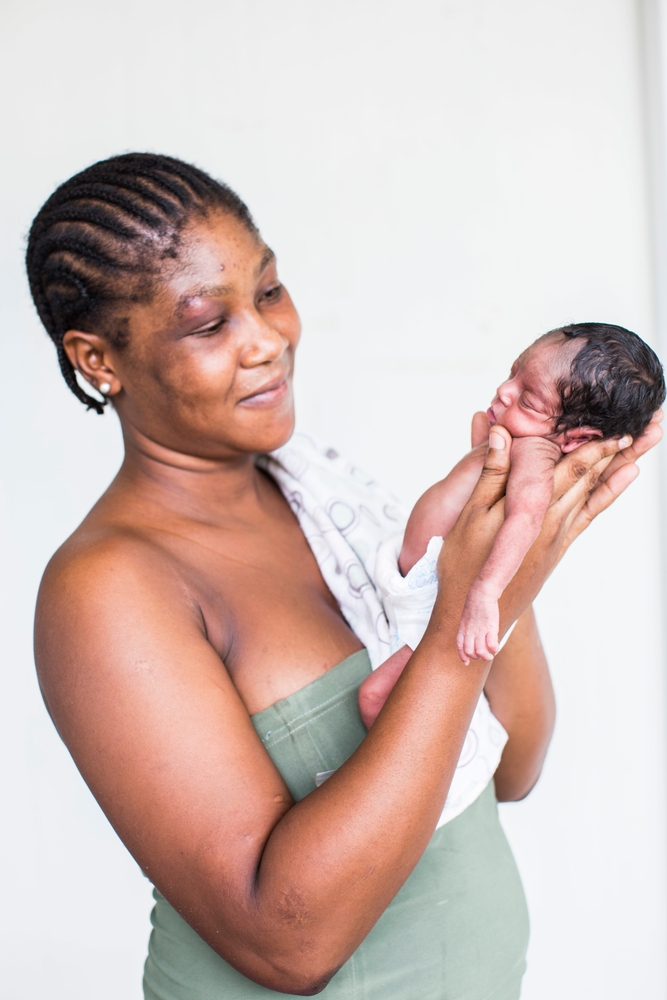 For two weeks, Serene Princeton’s amniotic fluids were leaking substantially. She visited different hospitals in Port-au-Prince seeking help, and for a short while the leaking stopped. At that time she first visited the MSF CRUO Hospital, where her first child was born a year and a half ago. But she was not admitted this time as she did not meet MSF’s criteria—there are so few maternity beds available that MSF is forced to prioritize those at greatest risk from birth complications.

Serene went to the general hospital but it was on strike. She went to other hospitals but they were only accepting pregnant women at full term, which she was not. She went to clinics all over the city. She started bleeding and feared the worst. Desperate, she returned to CRUO for the second time, and explained that she was dying; her voice was gone from crying. By now her situation met MSF’s criteria and she was admitted.

She was in labor for three days before finally giving birth through Caesarean section to a son, Dieudens. Both mother and baby are doing well. 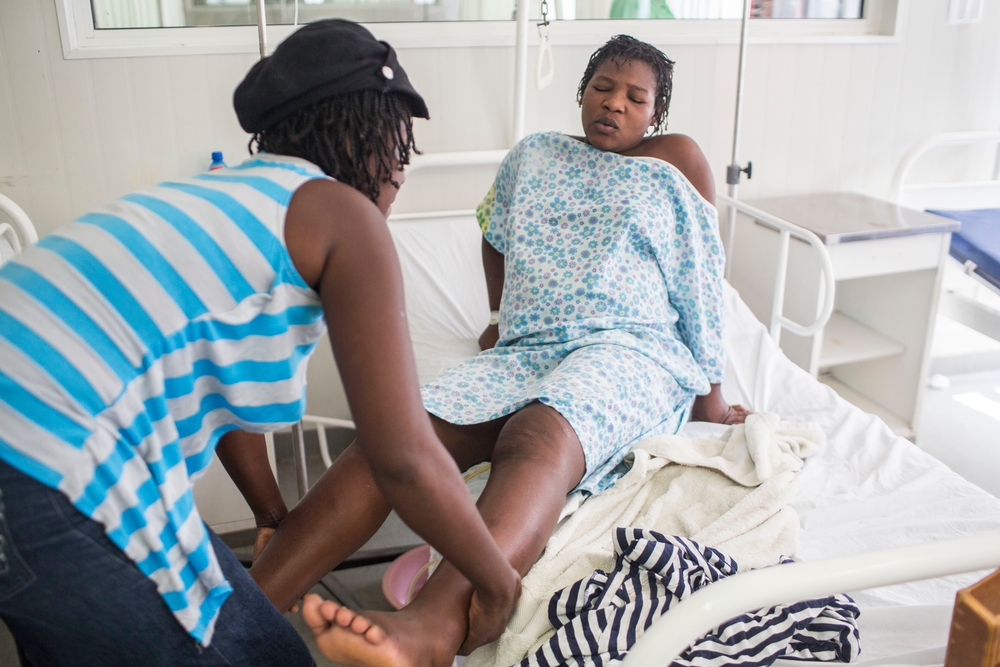 Stephanie is a salesperson and her husband, Wisnel Compert, is a carpenter. Stephanie is 30 weeks pregnant and her blood pressure is very high.

She was originally referred to the MSF CRUO Hospital on October 16 from Pernier Health Centre to La Paix Hospital, where she was admitted two days previous. But there were no doctors to treat her at that hospital. She and the other patients were told to go home.

Fortunately before leaving, a nurse checked Stephanie’s blood pressure and told her to go to the MSF CRUO hospital instead. Stephanie and Wisnel do not have anything prepared—no change of clothes, no wash items. Until the moment she went to the Pernier clinic, there had been no problems with her pregnancy. When she arrives she has hypertension and high temperature. At 10:15 she is induced with a dose of oxytocin and she starts having contractions, but they subside.

At 12:30 her midwife, Francette Pierre Joseph, gives her another dose. She receives further doses every six hours until she is in full and active labor. By the end of the day contractions have still not started again. She sits in bed enjoying dinner with her husband at her side. Stephanie eventually gave birth through Caesarean section the following day 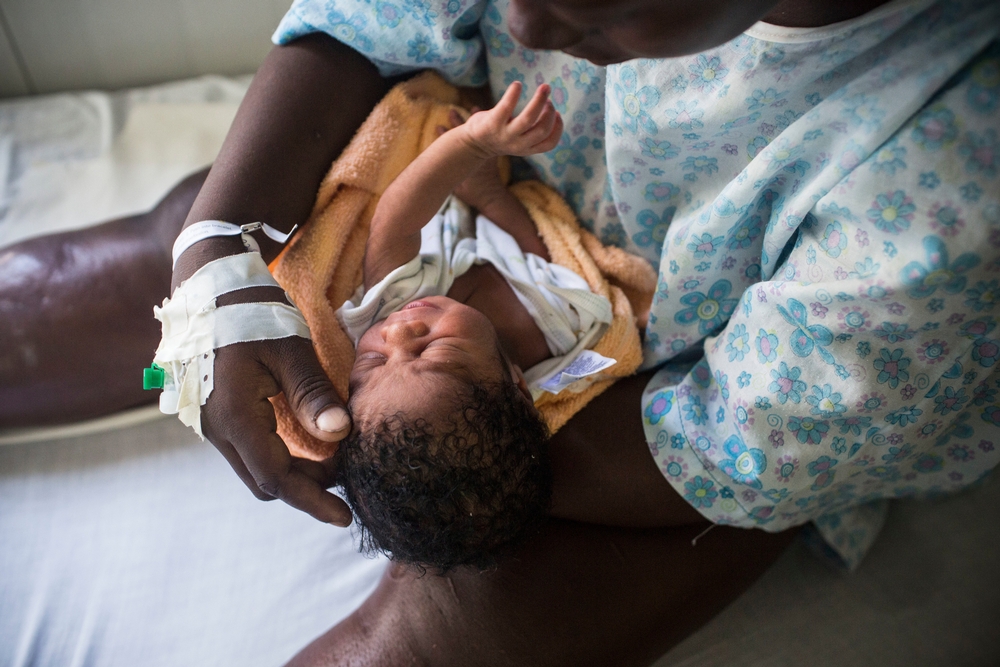 Guerda Jean (24) is brought into the MSF CRUO Hospital in the morning of October 17 with severe pre-eclampsia. Her legs are so severely swollen that her skin has split, leaving a gaping wound. Guerda has already had two Caesarean sections, and if she has a third her uterus will become too vulnerable for any further pregnancies.

For over a day the medical team tries to stabilize Guerda and reduce her blood pressure from 170/120. They succeed in getting it down to 160/120 but she is still not stabilized. In the afternoon her baby’s condition worsens and Guerda is put on oxygen. The team and Guerda discuss performing a Caesarean section, even though she has not yet stabilized and it will severely weaken her uterus, in order to save the child. For a moment the baby improves, but the following morning the baby’s condition deteriorates further and Guerda has the Caesarean. She delivers a healthy baby girl and subsequently stabilizes. However, with three scars her uterus is now very vulnerable to rupturing during any future pregnancy. Therefore, following medical advice, Guerda chooses to get sterilized.