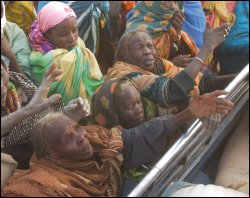 New York, March 10, 2004 - The international medical aid organization Doctors Without Borders/Médecins Sans Frontières (MSF) has found alarming nutritional needs in the war-affected town of Garsilla, in the Darfur region of western Sudan. In the course of vaccinating more than 4,900 children against measles, MSF identified 111 severely malnourished and 387 moderately malnourished children, and will now open a therapeutic feeding center (TFC) to care for them.

Nearly 18,000 internally displaced people have fled to Garsilla, a town of 4,500, after brutal attacks on their villages. MSF has witnessed this pattern in all of the areas the group has been able to assess. Almost 17,000 people are seeking refuge in Deleig, a town of 5,000, while another 13,000 people have fled to Um Kher, a town of 5,000. Today MSF will assess Mukjar and Bindisi, where the group anticipates a similar situation.

The displaced people in all of these locations are not living in camps, but have gathered in various sites around the town, like schools and offices, or they simply sleep in the open or live with local families. The communities are helping the displaced as much as they can, but resources and coping mechanisms are becoming increasingly strained, as is to be expected when a population swells to more than four times its original size.

MSF is extremely concerned about the food security for people throughout the Darfur region, and fears that continued violence and insecurity, coupled with an insufficient international aid response, will cause the already precarious situation to deteriorate further. In order to avoid a rapid increase of malnutrition, MSF calls for an increased humanitarian response to the situation in Darfur.

In February 2003, fighting broke out in Greater Darfur, the western most region of Sudan. The UN estimates that more than 700,000 people have been internally displaced, and an additional 140,000 refugees have fled to Chad. MSF is one of very few international organizations with a sustained presence in Darfur. MSF's teams are currently providing assistance in Garsilla, Deleig, Um Kher, Mukjar, Bindisi, Zalingei, Mornei, and Nyertiti, with further assessments planned. MSF has been in Darfur since December 2003.