Alarming new data suggest that the global scope of MDR-TB is much more vast than previously estimated, requiring a concerted international effort to combat this deadlier form of the disease 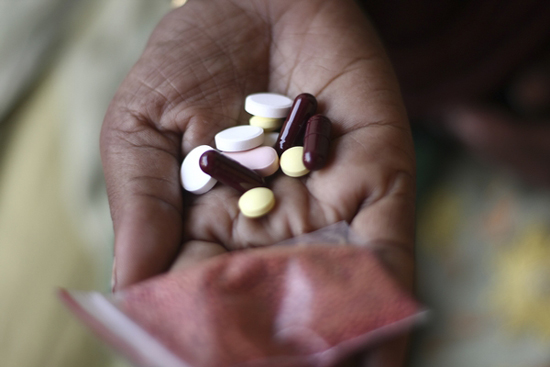 Some of the drugs, part of a long, difficult regimen, that MDR-TB patients must take

The global MDR-TB crisis coincides with a huge gap in access to diagnosis and treatment. Existing diagnostic tools and medicines are outdated and hugely expensive, and inadequate international funding threatens the further spread of the disease. Worldwide, less than five percent of TB patients have access to proper diagnosis of drug resistance, and only 10 percent of MDR-TB patients are estimated to have access to treatment—far fewer in low-resource settings, where prevalence is highest.

“Wherever we look for drug resistant TB we are finding it in alarming numbers, suggesting current statistics may only be scratching the surface of the problem,” said MSF president Dr. Unni Karunakara. “And with 95 percent of TB patients worldwide lacking access to proper diagnosis, efforts to scale up detection of MDR-TB are being severely undermined by a retreat in donor funding— precisely when increased funding is needed most.”

Data collected from MSF projects around the world have shocked doctors tackling the disease.

In the north of the Central Asian country of Uzbekistan, 65 percent of patients treated by MSF in 2011 were diagnosed with MDR-TB. Of those patients, 30–40 percent had presented to the MSF clinic for the first time, an unprecedented number globally— indicating that drug resistant TB is not only fuelled by incorrect treatment, but that it is also transmitting in its own right.

In South Africa, where the TB burden is one of the highest worldwide, MSF has seen a 211 percent increase in TB diagnosis per month in its program in KwaZulu Natal, following the introduction of a new rapid diagnostic test. Of those patients confirmed with TB, 13.2 percent were resistant to the drug rifampicin, one of the most effective first-line drugs for treating TB.

In Myanmar, of an estimated 9,300 new cases of MDR-TB every year, so far just over 300 patients in total have received treatment. The cancellation of an entire round of funding from the Global Fund to Fight AIDS, Tuberculosis, and Malaria threatens to undermine a five-year plan to reach an additional 10,000 people living with MDR-TB in Myanmar. The funding cut also threatens treatment expansion plans in many other countries.

The global crisis is exacerbated by a perfect storm of lengthy treatment regimens (around two years) with highly toxic drugs, most of which were developed mid-last century and have unpleasant side effects. The small TB drug market, which features few manufacturers, has kept the costs of some drugs prohibitively expensive. Reduced funds, notably the recent Global Fund cuts, only exacerbate the situation. Furthermore, a new rapid diagnostic tool with the potential to massively increase early detection of drug-resistant TB is prohibitively expensive in low-resource settings, exactly where the ability to detect TB within hours—as opposed to days or weeks—is most needed to save lives.

MSF is calling on governments, international donors, and drug companies to fight the spread of drug-resistant TB with new financing and new efforts to develop effective and affordable diagnostic tools and drugs. Far shorter and less toxic drug regimens are needed, along with currently non-existent formulations for children, and a point-of-care diagnostics test. Regulatory measures need to be enforced to prevent further spread of the disease due to mismanagement by practitioners.

“We need new drugs, new research, new programs, and a new commitment from international donors and governments to tackle this deadly disease,” said Dr. Karunakara. “Only then will more people be tested, treated, and cured. The world can no longer sit back and ignore the threat of MDR-TB. We must act now.”

In existence since antiquity, TB is today the second biggest killer globally - and there are more and more cases of TB resistant to first-line drugs normally used to treat it. Currently, an estimated 12 million people are living with TB.

Multidrug-resistant TB (MDR-TB) is a form of tuberculosis that does not respond to standard treatments using first-line drugs. It can take up to two years to treat, with highly toxic drugs. Drug-resistant tuberculosis (DR-TB) developed during the treatment of drug-sensitive TB for several reasons: failure to complete full courses of treatment; drug supply interruptions; improper provision of drug doses; and provision of improper, expired, or poor-quality medicine. MDR-TB is now transmitting from person to person.

Faced with a serious funding shortage after a disappointing replenishment conference, and after donors scaled back their pledges, the Global Fund to Fight AIDS, Tuberculosis, and Malaria took the unprecedented step in November 2011 of cancelling a round of funding grants. Without ‘Round 11’, no new grants for scale-up will be disbursed until 2014, leaving countries unable to aggressively tackle their TB epidemics. The cancellation of Global Fund Round 11 comes at a time when scale-up of DR-TB programs is most needed.