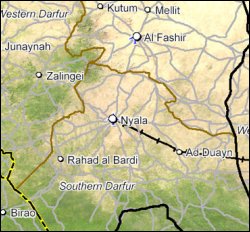 New York/Paris, January 15, 2004 - Today, the Sudanese authorities closed camps in Nyala, western Sudan, following the attempt yesterday to transfer displaced persons without their consent to new camps located some 20 kilometers from the city. The new camp is in an area considered unsafe and where assistance is insufficient for this already vulnerable population. Some 10,000 people were living in the camps.

This relocation started yesterday, January 14, when Sudanese authorities arrived at the camps and began the forced transfer of people by trucks to the new sites. This operation was suspended later in the day when, to escape the intended relocation, a number of the displaced fled in panic. Amongst those who fled were families with severely malnourished children who had been under the care of Doctors Without Borders/Medecins Sans Frontieres (MSF) and did not arrive for their treatment. MSF was treating nearly 30 children from these two camps for malnutrition.

This morning, when Sudanese police and other authorities arrived, the camps were up to 90% empty, the population having already fled. MSF teams were prevented from distributing drinking water to the people who remained. For the second consecutive day, some malnourished children have not been able to receive the vital care their condition demands.

The displaced people are spread around Nyala in two impromptu camps where between 50 and 150 newly displaced arrive every day. These people usually arrive in Nyala empty handed - after having suffered from acts of violence and having had their village and their harvests plundered and burned - in the hope of finding a safe haven and vital assistance. In the Nyala camps, MSF provides basic health care and treats the severely malnourished children, as well as distributing basic goods (including blankets and jerrycans) and drinkable water.

The relocation is being undertaken despite indicators showing that the health of the population is already precarious. At present, mortality rates are already high in the camps where there is minimal assistance available: in the last two weeks, there have been 6 deaths/per 10,000 persons/per day for children under the age of five. This is a rate that indicates an emergency medical situation.

This transfer promises to have greater consequences for this already vulnerable population. The new locations are in an area where access by humanitarian organizations is difficult because of insecurity. In addition, little has been prepared to accommodate those who are being forcibly relocated to these sites. The absence of shelter and food distributions, insufficient access to water and latrines render these locations unsatisfactory. Moreover, the population fears for its own safety as these new camps are located in a region where there is ongoing fighting.

For more than a year, Darfur, located in western Sudan and about two-thirds the size of France, has been a conflict zone which has caused the displacement of some 600,000 people and affects almost one million people in the entire Darfur region. MSF has been providing medical and nutritional care to the displaced here since the end of December 2003, particularly those in Nyala, the largest city in the Darfur region, where nearly 10,000 people have found refuge in the camps, fleeing the violence and attacks on their villages. However the majority of the displaced remain inaccessible to any aid.

Since the end of December 2003, an MSF team of 10 international and dozens of Sudanese, work in Darfur near the populations displaced by the fighting. In addition to Nyala, MSF also gives medical and nutritional support to 7,000 displaced who have found refuge in Zalinge and is attempting to get access to other parts of Darfur. Across the border in Chad, MSF teams are providing support to Sudanese taking refuge near the towns of Tine, Birak, and Adré.