Bangladeshi Staff at the Heart of Response to Rohingya Refugee Crisis

More than 2,000 Bangladeshi and international staff members—from doctors, nurses, and mental health counselors to logisticians, translators, and social workers—are working with Doctors Without Borders/Médecins Sans Frontières (MSF) to respond to the Rohingya refugee crisis in Bangladesh. MSF operations here have rapidly scaled up since late August 2017.

More than 688,000 Rohingya refugees have arrived in Bangladesh’s Cox's Bazar area over the past six months, after fleeing targeted violence and persecution in Rakhine state, Myanmar. They join hundreds of thousands more Rohingya who fled Myanmar during previous waves of violence against the community. 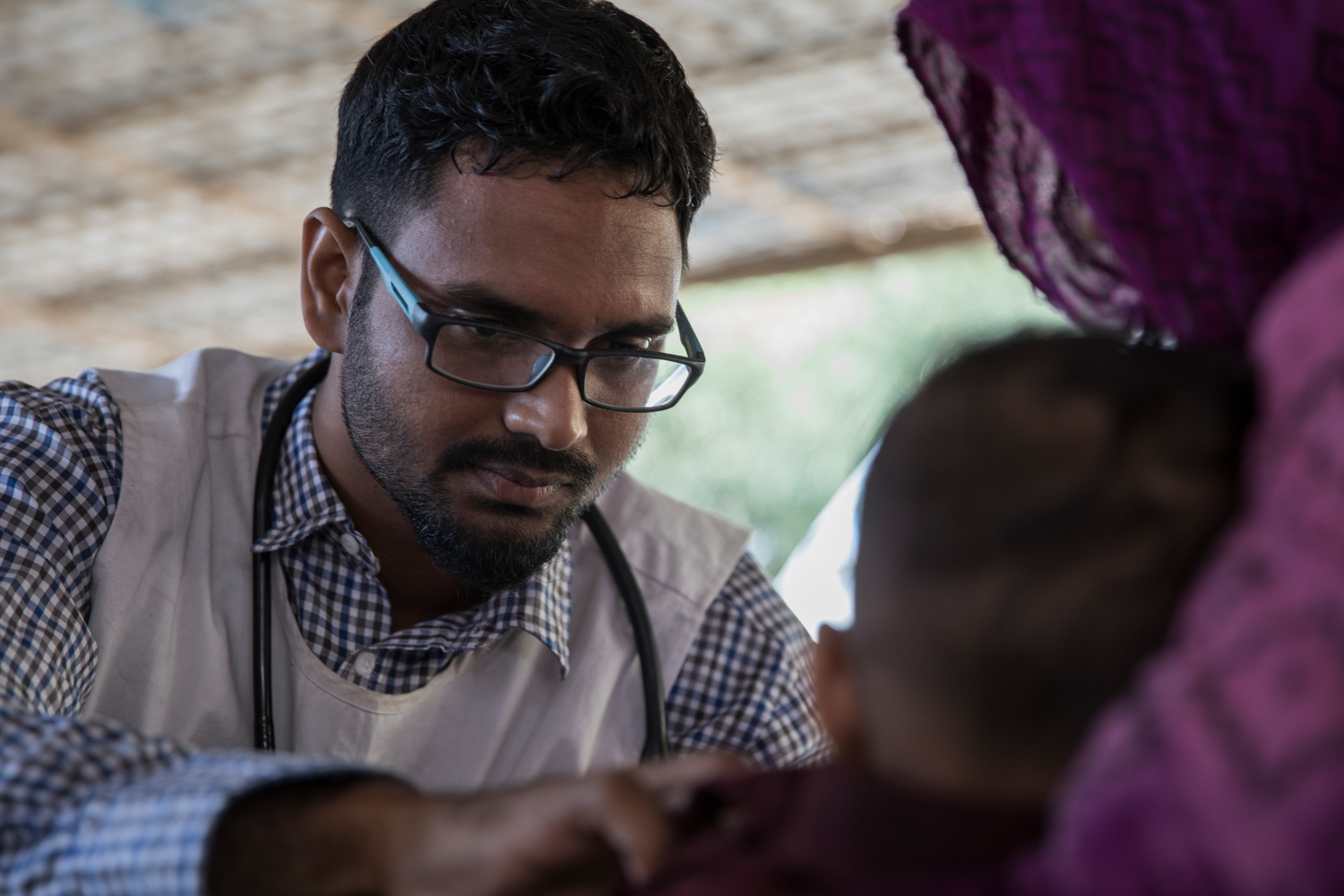 Dr. Kader has been working for the past three months at Sabrang entry point, in the south of the Cox’s Bazar peninsula, where newly arrived Rohingya refugees from Myanmar are initially brought. An MSF mobile team works there.

Usually every day we send somebody to talk to the Bangladeshi Border Guard to see if there are any new arrivals. We talk to them to ensure severe cases can be released quickly. Often the head of the family comes first and, a few weeks later, the women and the children come, once the father has established a presence and the situation is better known. Mostly new arrivals are women and children.

It was very busy in October and November. In December numbers started to fall, to only a few hundred every week, but the flow of people is [ongoing and intermittent]. Some days there are no new arrivals at all. We also provide medical assistance to members of the local [Bangladeshi] community.

Our team is made up of 10 people. We do nutritional screening with children and carry out various vaccinations (diphtheria, polio, et cetera). Respiratory infections are the most common problem now, whereas in November almost everyone arriving was suffering from diarrhea. Some people have hidden for 15 to 20 days before reaching the entry point. Others arrived after just two days. Eventually they need to come here to be registered in order to get access to aid.

The crossing from Myanmar into Bangladesh can cost from around 2,500 Bangladeshi taka per person [about $30] up to 12,500 taka [nearly $150]. Normally it takes about two hours to cross the Naf river, but it can take up to four hours if people arrive the long way around by sea. They sometimes wait three to four days in Myanmar until the boat is ready, and then 30 to 60 people travel in each boat.

Patients say there is almost nobody left in their villages, so they don’t feel safe over there. They are in constant fear of attack and there are restrictions on their movements. 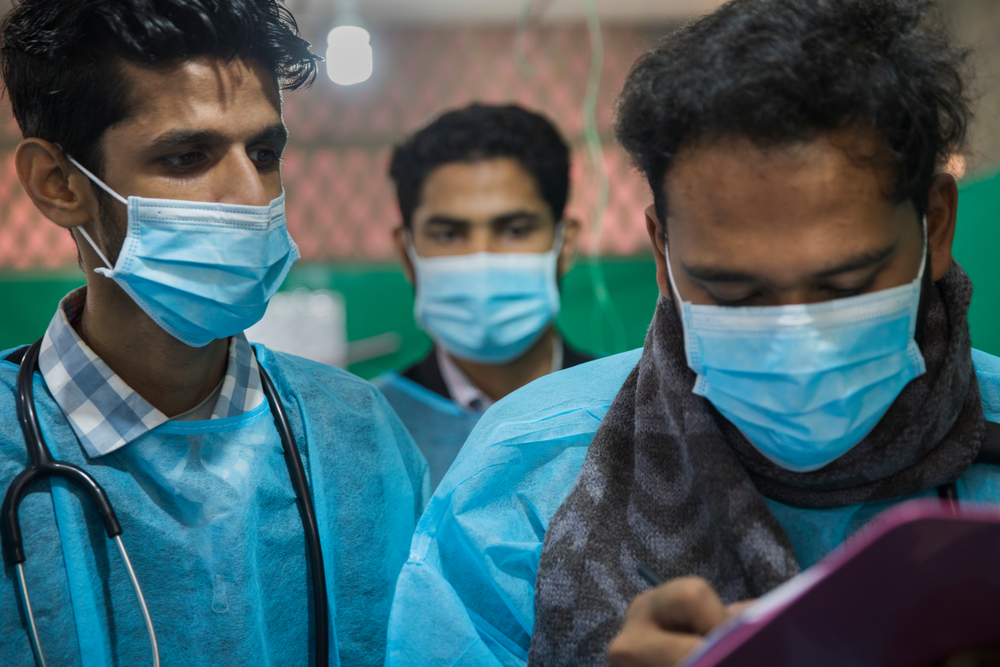 Wasim Firuz [left] is a 28-year-old medical doctor at MSF’s diphtheria treatment center in Moynarghona [later reconverted into an inpatient department facility]. Firuz was born in Cox’s Bazar and has worked for MSF since December 2017. Before that, he worked at a hospital in Dhaka but joined MSF to help with its response to the Rohingya refugee crisis.

At the diphtheria treatment center, Firuz, along with his Bangladeshi and international colleagues, learned to fight diphtheria, which many considered a disease of the past. In just two months, the teams treated more than 800 cases of suspected diphtheria at this facility.

We work here in two shifts: morning and evening. We do our morning rounds and wait for the patients to arrive from the different health facilities. In general, it is good to work with people from other countries. It is a good experience.

Everyone should stand for the Rohingya. They had to leave their country and we have to do our best to support them. In the beginning we were only four Bangladeshi doctors in this facility and we had to work alone at night without enough equipment.

At some points in December, when cases of diphtheria started to emerge, we had 50 to 60 patients a day and we were operating in five tents because the facility was not finished yet. We worked through some cold nights.

Some local people in Cox’s Bazar worry that they are becoming a minority with the arrival of so many refugees and they have some concerns. But it is important to understand that the Rohingya haven’t come here to enjoy themselves, but to save their lives. We ourselves faced a similar situation in 1971, when we lived through the liberation war [war of independence from Pakistan] and millions of Bangladeshis found shelter in neighboring India.

Every day when we do follow-up care and a patient says that they are no longer in pain or have a fever, we feel good because we have managed to control a bit more of the disease.

On the other hand, a very sad moment was when we lost two patients, a baby girl, about three years old, and an eight-year-old girl. They died in front of me. We did all we could. At first, the baby was well, but from 11:00 p.m. onwards she deteriorated. The level of toxin in her body was very high and she had problems breathing. At about 3:00 a.m. we tried cardiopulmonary resuscitation, but by 4:00 a.m. she had died.

The magnitude of the needs here need to be better understood by the rest of the world. 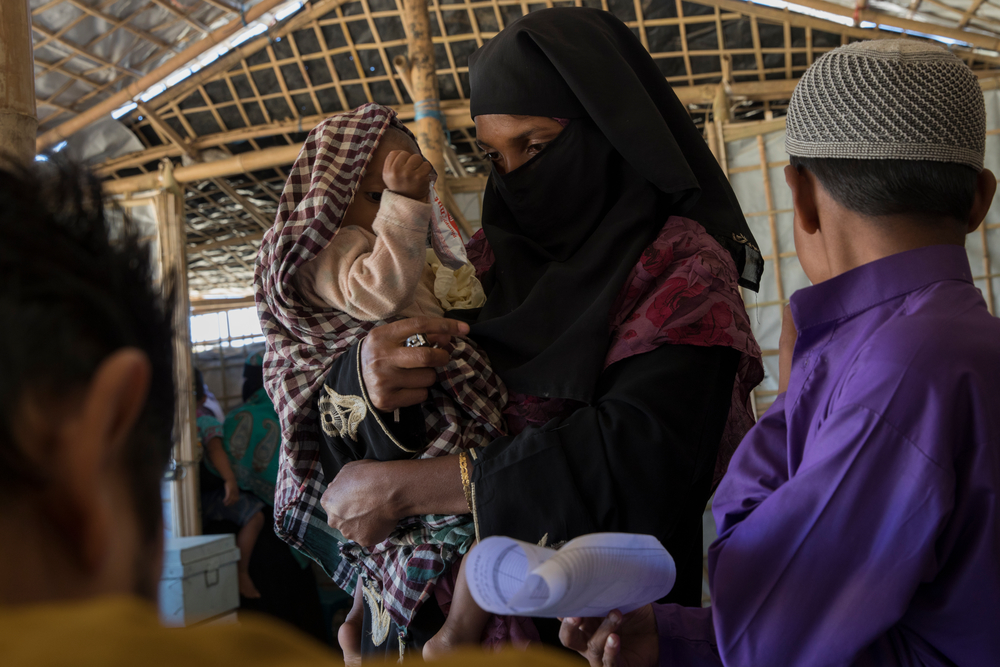 Mental health counselor Khadiza Chowdhry [not pictured] has been working in the MSF clinic near the Nayapara refugee camp since November 2017, when her husband saw a vacancy and encouraged Khadiza to work. She is now part of a four-member team that provides psychosocial support to Rohingya refugees. The camp has increased in size dramatically in the last few weeks.

Most of the women are missing their husbands or sons. Their houses have been burnt. They are very worried about their future.

For the patients, mental health consultations are always something new. They didn’t have access to these services in Myanmar. The consultations make them feel better because they have someone they can tell their story to.

Our mental health community educators work directly with the Rohingya community. They select patients who are then referred to us. Many of them are suffering from insomnia.

Some patients are referred to the Kutupalong clinic if they are found to have psychiatric issues. I meet with four or five new patients every day and do follow up with another four. Each session lasts from 45 minutes to an hour. I generally talk to both adult men and women, but today we had a child patient. In two and a half months, 180 patients have been provided with mental health consultations at this clinic.

They find it easy to talk with the counselors because, despite all the issues they carry on their shoulders, they prefer to open up to someone who is from outside their community. I recall a case of an 18-year-old boy who had nobody. His mother, father, and brother had been killed. He had been beaten and could not move his leg.

He came to the consultation because of pain in his hand. He used to work in Myanmar as a day laborer, but now he is unable do anything. He gets some relief items and begs for some money. In our sessions, I ask him about activities that help him to feel better. He says he finds some relief by thinking of his mother and father, and when he watches TV in a nearby tea shop. I encourage him to do things that provide relief. I say to him, “You are not alone in the world; all of humankind is here with you.”