Blog: An Alternate View of the 2010 World Cup

In South Africa, where the FIFA World Cup is getting under way, MSF is trying to show that beating HIV/AIDS should be the ultimate goal. 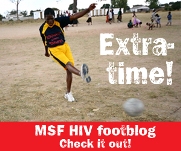 Extra-Time! is a Doctors Without Borders/Médecins Sans Frontières (MSF) blog with first-hand accounts and stories from field workers, staff and patients, gathered and presented during the FIFA World Cup in South Africa, from June 7th to July 14th, 2010.

With Extra-Time! MSF aims to provide the worldwide audience with an alternate view on the first FIFA World Cup hosted in Africa and to chronicle the positive stories of perseverance in the Southern African region’s struggle to fight the dual epidemics of HIV/AIDS and tuberculosis.

In the coming weeks Extra-Time! will include narratives, photographs and short videos from countries where MSF field workers provide care to people living with HIV and tuberculosis including Malawi, South Africa, Swaziland, Zimbabwe, Mozambique and as well as other places in the world.