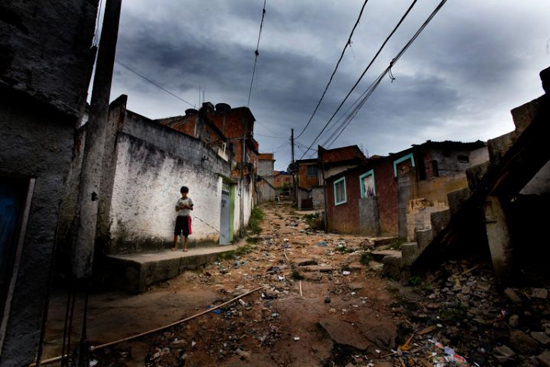 Since 2007, MSF has been providing emergency care and mental health support to the population trapped by violence in Complexo do Alemão, a slum area of Rio de Janeiro controlled by armed drug gangs.

After two years, Doctors Without Borders/Médecins Sans Frontières (MSF) is concluding its emergency intervention in one of Rio de Janeiro’s slums. MSF teams have treated thousands for the effects of the violence and hardship that persist in the capital’s favelas.

A group of slums, or favelas, home to more than 170,000 people, Complexo do Alemão is in stark contrast to idyllic postcard images of Rio de Janeiro: the neighborhood is a labyrinth of steep unpaved alleys flanked by poorly built houses, surrounded by improvised barricades to control vehicles entering the area. Less visible, but more striking, is the overpowering stream of violence that dominates the lives of the residents here.

"Here, one should not hear, see, or speak," says Elena*, a local resident. "When there is an outburst of violence, it is each to their own. It is frightening."

During one brutal police clampdown in June 2007—known as the Complexo do Alemão massacre—17 people were reportedly killed in one day and local residents caught in the crossfire had no access to emergency medical care.

Like hundreds of Rio’s slums, Complexo do Alemão is controlled by heavily armed groups that struggle for domination of the profitable drug trafficking business in this city of six million people. Violent clashes can erupt at any time, anywhere, as a result of police incursions or fighting between rival groups. But even when things appear calm, thousands of people like Elena live under the rule of armed groups and in fear of being in the wrong place at the wrong time.

In 2007, shortly after a series of violent clashes between police forces and armed groups, MSF started a project in Complexo do Alemão. During one brutal police clampdown in June of that year—known as 'Complexo do Alemão massacre'—17 people were reportedly killed in one day and local residents caught in the crossfire had no access to emergency medical care. Even in more peaceful times, ambulances do not enter slums like Complexo do Alemão. 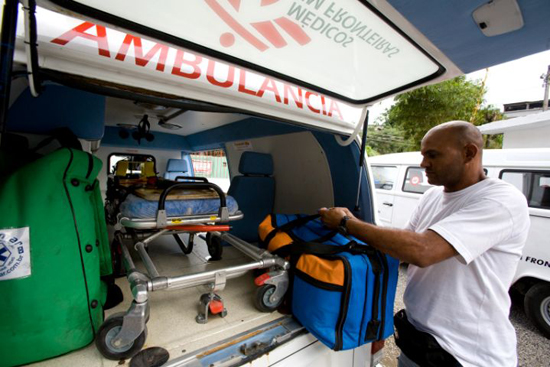 The MSF ambulance was set up in a Volkswagen Camper, which is the only vehicle narrow enough to go through road blocks set up by drug gangs. Yet, it cannot reach every area of Complexo do Alemão. Sometimes, when rescuing patients living in the steep and narrow lanes, MSF staff must continue the journey on foot.

The MSF project focused on emergency lifesaving medical services, including rescue and stabilization of patients and referrals to other public hospitals. For rescues and referrals, MSF turned a basic van into an ambulance, which had to be narrow enough to drive through the many roadblocks and alleyways.

The project also offered mental health care to people exposed to violence, helping them to cope with their experiences. "Because people here are expected to remain silent about any violent events they may witness, they are often forced to keep all these tragic stories inside," says Douglas Khayat, MSF mental health officer in Complexo do Alemão. "The mental health services offered at the MSF clinic gave people affected by violence the possibility to express their suffering and deal with it better, given that there is little that they are able to change in the environment around them."

For Elena, the benefits of mental health care at the MSF clinic came as a surprise. "I found out about the psychologists by chance. I fell ill at home and I was rescued and taken to the MSF clinic. There I found I had high blood pressure. After giving me medication, the doctor asked if there was anything bothering me," says Elena. "My husband drinks a lot and this makes me very nervous. I agreed to see a mental health woker. It was the first time in my life I did that and it has helped me a lot. Now I can deal with problems in a way that I was not able to before."

Like Elena, many patients are referred to mental health workers by medical doctors when they come to the MSF clinic seeking medical care for psychosomatic symptoms. "It is crucial that the doctors and psychologists work in collaboration to identify people in need of mental health support. Often, patients arrive at the clinic with a physical complaint that is triggered by a psychological condition, for example recurrent headaches," Khayat says.

Besides psychosomatic complaints, depression and anxiety are the most common symptoms found in adults. In children, aggressiveness, behavioral problems and learning difficulties are common. Behind the symptoms, there is usually an episode of violence. Half of all the patients seen by MSF psychologists had a story of violence to tell. More than one-third of these have been in a situation of conflict and one in five has had a family member killed.

"Given the horror of the stories, we expected to find more cases of post-traumatic stress disorder (PTSD), which is common when people go through a sudden shock," Khayat says. "However, we found that cases of PTSD were a minority. This is a sad indication that events that we would normally find extraordinary have already become routine here. Yet, people do not emerge from these experiences unscathed."

After two years, MSF is closing its project in Complexo do Alemão. "The project was an emergency response, planned to last only for a couple of years," says Tyler Fainstat, MSF’s head of mission in Brazil. "People here are still exposed to a lot of pressure from all sides and violence is part of their daily lives. Nonetheless, the number of armed clashes and wounded inside Complexo do Alemão have decreased, leading to fewer emergency cases, which was originally the focus of our project. In addition, some health services have become available for the residents, even though they are not right inside the community."

Between 2007 and 2009, the MSF team provided 19,000 medical consultations and 650 emergency rescues using the customized ambulance. The team of mental health workers gave more than 3,000 consultations to 1,300 patients, including children and adults. For Ana Maria, another resident, the mental health support was vital. "My brother was killed in the community when he was 16 years old and ever since I have been depressed," she says. "I didn’t want to leave the house, I didn’t want to talk to anybody. I was completely isolated. Twice, I wanted to kill myself. Then I lost my daughter in an accident. I just wanted to die. It was during one of these crises that I found out there were mental health workers here at the clinic. Here I found the support I needed to carry on living."

* names have been changed to protect patients' identities