?Sometimes, I think to myself that it would be better to go back to Somalia, and take the risk to face the bullets, rather than to die slowly of hunger and dehydration in this camp? 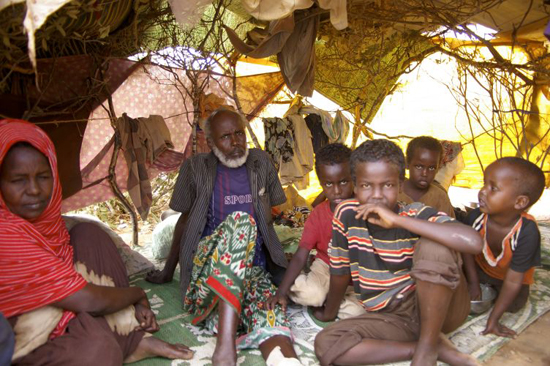 An estimated 270,000 Somali refugees are enduring difficult living conditions at Dagahaley, Ifo, and Hagadera refugee camps located on the outskirts of Dadaab in northern Kenya. Doctors Without Borders/Médecins Sans Frontières (MSF) began providing primary health care in February 2009 at a clinic in the Dagahaley camp, which houses an estimated 91,000 refugees, including nearly 60,000 people who sought safety from the war in Somalia in 2008 alone. More than 5,000 people continue to arrive each month. In April 2009, MSF conducted health and nutrition surveys in two sectors of Dagahaley camp, and found several worrying indicators.

Although mortality rates have not reached the emergency threshold, the situation for nutrition and for water and sanitation is alarming. Severe overcrowding and congestion due to the lack of land poses health risks, while newly arrived refugees are not properly registered and have little access to food, shelter, health care services, and basic non-food items. Some refugees have become so distraught with the conditions that they consider returning to Somalia rather than continuing to endure these harsh living conditions. 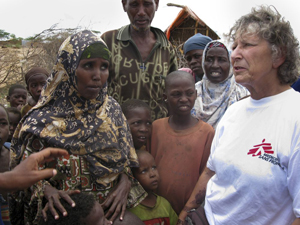 Although the camps have existed since 1992, the current situation is fast becoming a new crisis. At the same time, assistance has not kept pace with the growing needs. MSF will immediately deploy additional staff and resources to try to provide more health services, and would like to draw attention to the fact that a swift expansion and better coordination of humanitarian assistance for an exhausted, war-weary population can avoid an even larger emergency.

While MSF is stepping up its assistance for refugees, it also calls upon the Kenyan authorities, international donors, the UN, and other humanitarian agencies to strengthen their efforts and to ensure assistance and protection for the refugees in Dadaab meet international standards. Additionally, the UNHCR and Kenya must urgently find options to expand the camp and improve the screening process and registration of refugees in order to enable humanitarian organizations to improve living conditions in Dadaab. 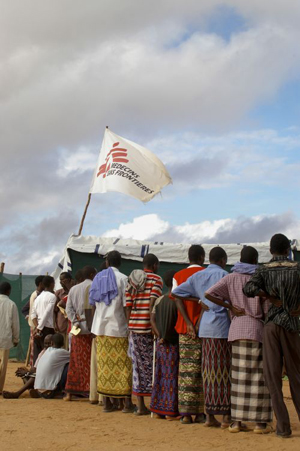 Kenya 2009 © MSF
Refugees wait in front of an MSF health post at Dagahaley camp in Dadaab.

MSF is currently conducting 150 outpatient consultations per day, and providing ante-natal care, vaccination services, and nutrition support through mobile teams and at a fixed health structure for the 25,000 residents of blocks G and H of Dagahaley camp. MSF is treating 70 children for severe acute malnutrition on an outpatient basis and provides supplemental family food rations to an additional 1,100 children with moderate malnutrition. These numbers are expected to increase based on results from a nutrition survey carried out in April that revealed seven percent severe acute malnutrition (SAM) for children under five years of age, according to the new World Health Organization growth standards, and 22.3 percent global acute malnutrition (GAM). Such levels of malnutrition are rare in refugee camp settings where a population is thoroughly dependent on outside assistance.

At the same time, a scarcity of food stocks at the World Food Program warehouse led to a 30 percent cut in rations during the last general food distribution in April. The next scheduled general food distribution in July may see a further 50 percent reduction in rations—meaning less than 1,000 calories per person per day—unless immediate action is taken.

There is a hospital in each of the camps, but each is stretched too thin. The 90-bed structure in Dagahaley camp, for example, has only 10 beds available for the maternity ward, which expects to assist with 280 deliveries per month. Immediate reinforcement of hospital services should be a priority.  Additionally, According to MSF’s survey, only 50 percent of refugees have received bed nets to prevent malaria while measles vaccination coverage is at only 70 percent. 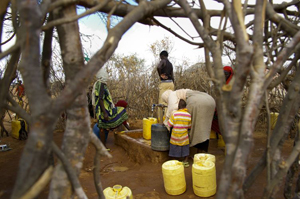 Kenya 2009 © MSF
Refugees gather water at one of only four boreholes that provide water for 91,000 people in the area.

Water and sanitation services are scarce throughout the three camps, as well as in the strained host community. The situation is especially acute for the newest arrivals in Dagahaley camp who struggle to survive on as little as three liters of water per day. There are only four boreholes for 91,000 people and each of these is working 20 to 22 hours every day. This water scarcity has led to tensions and fighting among the refugees and the host community. Several studies over the years, however, have shown that the underground aquifer holds plenty of water, so immediately digging two new boreholes in the area for new arrivals and one for the host community should be a priority.

Sanitation and waste management is also worrying. The current network of latrines is hardly maintained and there are no latrines for the new arrivals. Based on population figures, the current number of latrines in Dagahaley camp is far below the internationally accepted and minimum standard of one latrine per 20 people. 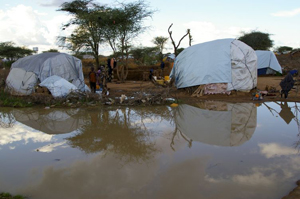 Kenya 2009 © MSF
Some refugees must take shelter in areas easily flooded during the rainy season.

For security reasons and despite the deterioration of the humanitarian situation in Somalia, Kenya officially closed its border with Somalia in January 2007 and forced the UNHCR to close the Liboi transit/reception center. Since then, it has been impossible for refugees to be registered or receive a proper medical screening and adequate assistance in the camps. The estimated 5,000 Somalis who attempt to reach Dadaab each month and benefit from prima facie status as refugees are exposed to extortion from human smugglers as they seek safety from war-torn Somalia.

Once in Dadaab, there is no guidance for new arrivals, no orientation or support to find land, no procedure in place for proper food distribution, medical screening or vaccination. Non-food items are scarce and new arrivals can wait more than six months for basic items such as plastic sheeting, jerry cans, blankets, and cooking sets. The only thing they receive is a food ration card after waiting for five days. For these reasons, a proper transit area is urgently needed.

There has been no more land for expansion since August 2008, so finding shelter is often left to the good will of refugees already living in the camp or the host community, exacerbating the severe overcrowding and congestion that already exists. Most new arrivals simply build makeshift shelters that are easily flooded or washed away by heavy rains, or they resort to living under trees or bushes where they are exposed to the elements.

Many problems are linked to the hypothetical fourth camp that has been under discussion between the UNHCR and Kenyan authorities for more than a year. Unfortunately, improvements in the current camps have been put on hold during these negotiations. With the border officially closed and no transition camp, packing more and more refugees into the existing camps is not tenable.

The Kenyan authorities and the UNHCR, with the support of the international donor community, must urgently explore options that respond to Kenya’s security concerns, while also preserving the integrity of one of the rare safe havens for Somalis and facilitating adequate assistance for these refugees.