On the Brink of Mass Starvation in Darfur 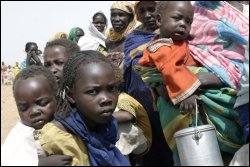 Because of the catastrophic nutritional situation MSF started blanket-feeding-distribution for children under the age of 5. The children received 5 kg of UNIMIX and 1 litre of oil.
Photo © stephenpleger@yahoo.com

New York, May 20, 2004 - The threat of famine looms in the Darfur region of western Sudan, according to the international medical aid organization Doctors Without Borders/Médecins Sans Frontières (MSF). A recent nutritional survey shows dangerously high levels of malnutrition and mortality and a rapidly deteriorating food security situation. With already high levels of excess deaths and malnutrition, the whole population is teetering on the verge of mass starvation.

"Many people have been forced to flee their homes in search of food and safety," said MSF's emergency coordinator Ton Koene. "They are not safe in their home villages and so they have come to relief centers where they are finding only more death and suffering."

Since February 2003, there has been an escalating conflict in Darfur between the SLA and JEM rebel groups and the government of Sudan. At the same time widespread and brutal attacks on civilians have created a humanitarian crisis. Today, there are an estimated one million people displaced by the attacks, most of whom are destitute and in constant fear, with little medical care and insufficient food, water and shelter.

In addition to the scale of the current crisis, the nutritional study indicates how the situation is set to further deteriorate unless urgent action is taken. Water systems, crops and livestock were looted or destroyed during attacks on villages. People have not been able to plant and no harvest is expected this year. The whole population faces food shortages and is in danger of starvation in the very near future unless substantial food distributions can be organized. As people are weakened by hunger, they will only become more vulnerable to disease. Threats of malaria and diarrheal diseases will only increase with the onset of the rainy season, and the death and suffering could escalate to catastrophic proportions.

Despite promises by the Sudanese government to expedite the provision of assistance, bureaucratic barriers placed in front of aid agencies significantly inhibit immediate action. The government has also not taken action to stop the violence against civilians. The aid community and the United Nations have so far failed to be present and provide adequate levels of desperately needed food, water and shelter.

The result has been inadequate aid reaching people who already face a desperate situation. The continued attacks on the displaced and their inability to plant before the rainy season leaves people completely dependent on assistance, assistance which has been slow to arrive.

"The international community has known the extent of the crisis in Darfur for many months," said Koene. "But people are still facing attacks. People are still terrified. Although some food has been distributed, much more is needed in the coming weeks - if not, more children and their parents will die."

Even with a cease-fire, targeted violence against civilians continues and people live in a climate of intense fear. Wounded people have not sought health care out of fears of being identified and detained. Violence is the core of the problem. The Government of Sudan must ensure safety for civilians and respect peoples' freedom of movement to seek safety and assistance.

The current humanitarian aid effort is woefully insufficient - only irregularly serving a fraction of the victims of this crisis. The arrival of the rains in late May will hamper or paralyze aid distribution in many areas of Darfur. The Government of Sudan and the aid community must launch a massive relief operation now.

An estimated 800,000 people have been displaced by violence in Darfur. MSF provides medical and nutritional assistance to people in Mornay, Zalinge, Kerenik, Nyertiti, El Genina, Garsila, Bindisi, Deleig, Umkher and Mukjar and Kalma camp (near Nyala) where 300,000 displaced people have sought refuge. Teams are treating more than 1,000 children in therapeutic feeding centers and an additional 3,500 in supplementary feeding programs. MSF has already begun targeted food distribution of high-energy foods to children under 5 and provides water and sanitation services. MSF has been treating many cases of measles and is preparing for malaria and cholera outbreaks. Currently MSF has 46 international volunteers in Darfur working alongside hundreds of Sudanese staff.