Burkina Faso: Assistance to Refugees from Mali in the North

MSF is assisting Malian refugees driven from their homes by conflict and now seeking shelter in northern Burkina Faso, an area already struggling with resource shortages. 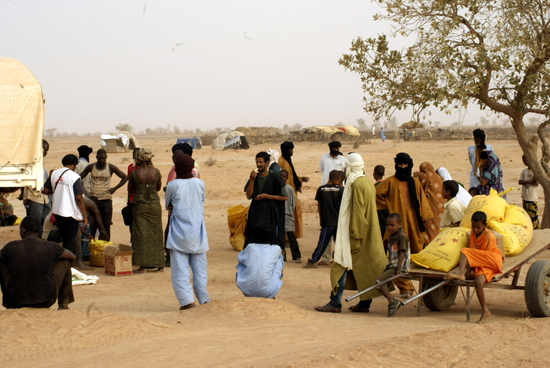 MSF carried out a food distribution for Malian refugees in the Mentao camp in northern Burkina Faso.

In the wake of violent clashes between Mali's army and Tuareg rebels, nearly 20,000 Malians have fled their country and taken refuge in northern Burkina Faso. Most of the refugees are gathered in Oudalan, Seno and Soum Provinces. Doctors Without Borders/Médecins Sans Frontières (MSF) is distributing water and food and assessing basic health care needs in the Mentao camp, which is near Djibo and which is now hosting 3,000 people, up from 1,000 people three weeks ago.

"There has been a significant increase in the refugee population, and we are expecting to have 5,000 to 10,000 people in this camp in the coming weeks," says Jean Hereu, MSF’s head of mission in Burkina Faso.

MSF is distributing 50 cubic metres of water per day in Mentao. The teams are also providing food, having initially donated five tons of rice, red beans and oil, with more to come pending the start of an emergency response by the World Food Program (WFP). In the coming days, the teams will assess the medical needs of the refugees with Burkina Faso's Ministry of Health.

A Backdrop of Food Insecurity

The refugees include a number of nomadic people who have sought refuge next to a tributary of the Niger River where their livestock will have access to water. But many of the refugees are used to a more settled life and now find themselves without resources, leaving them extremely vulnerable.

"During our initial assessment, the health situation was not critical. But, to stay healthy, refugee populations need continued access to water, food and medical care," says MSF logistician Daho Moussa. "We must be vigilant because the situation could deteriorate quickly."

A lack of rainfall in 2011 had adverse effects on crops, pastures and water levels in dams. The influx of so many people, along with their livestock, may create tensions between communities and destabilize an already precarious situation. On top of this, food insecurity in the region is likely to put the health of both refugees and local people at risk.

In addition to Mentao camp, the authorities have formalised a second site for refugees in Férélio, in Oudalan Province. An MSF team visited the second camp on March 7 to assess the situation.