Women who survive complicated deliveries can develop fistulas. Struck by incontinence, they live hidden away from others, resigned to their fate and suffering in silence. 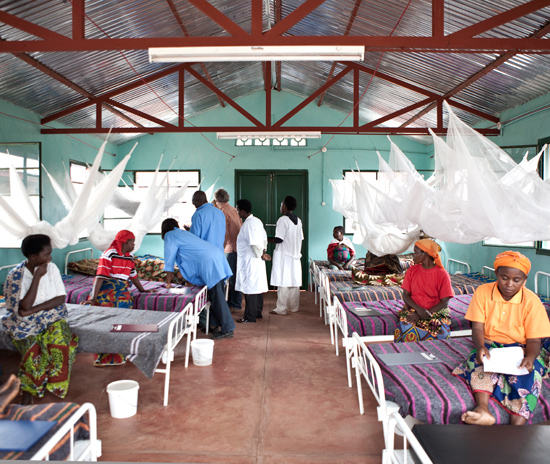 In France, the last case of obstetrical fistula was operated on in 1957. Since then, the phenomenon has almost disappeared in the Western world. But in countries where access to health care continues to be limited, many women still suffer from fistulas. In Burundi, where the maternal mortality rate is among the highest in the world, several hundred cases are seen every year. In July 2010, Doctors Without Borders/Médecins Sans Frontières (MSF) opened a center where women can receive operations to repair fistulas.

Two hours' drive from Bujumbura, in the very center of Burundi, the Gitega regional hospital lies in the hills at an altitude of some 1,850 meters (about 6,070 feet). This is where MSF built the Urumuri center—which, translated from the Kirundi, means "the light chasing darkness away"—with the support of the Burundi Ministry of Health, to treat obstetrical fistulas. This disease continues to ravage populations in sub-Saharan Africa, essentially due to a lack of access to specialized health care for pregnant women.

“When access to this care is limited, obstructed labor during childbirth often results in the death of the mother or her baby,” said Geert Morren, an MSF surgeon and fistula specialist. “If the mother manages to survive, the birthing process can cause necrosis of the tissues, resulting in the formation of an orifice between the bladder and vagina, the rectum and vagina, or the ureters and vagina. This is known as an obstetrical fistula.”

This formation leaves an indelible mark—urinary and/or fecal incontinence—which often leads to social exclusion. “I lost my baby in childbirth,” said 23-year-old Violetta. “A fistula appeared and I became incontinent. My husband could not bear it. He threw me and our three-year-old son out of the house. Shortly afterwards, he got married to another girl in the village.”

Pascasie, 32, a mother of eight children, also spoke of her experience. “I contracted this fistula while I last gave birth. My husband then put me into quarantine because of the bad smells. When I walked through the village, my neighbors would cover their noses, right in front of me. And as I walked away, I would hear them laughing.”

These are far from isolated cases in Burundi, where fistulas are described as the 'backyard disease’. This image says a lot about everyday life for the women suffering from fistulas. Struck by incontinence, they live hidden away from others, resigned to their fate and suffering in silence.

“I have now been living with ’it’ for 12 years,” said Pélagie, 42. “I thought it would never heal. One day, I went to a hospital in Bujumbura I had been told about since they operate on fistulas. But the cost of the operation was very high. Shortly after this visit, my husband died. And I lost all hope of ever finding the money for the operation. How could I find the means, as a widow?”  Today, however, Pélagie has new reason to hope. “My children heard the news on the radio. Médecins Sans Frontières had just opened a center in the Gitega hospital where they were offering to treat women with this disease free of charge. With the help of my family and neighbors, I was able to find the money for transport and I went to the hospital.”

Pélagie thus made it to the Urumuri center, where she met Pascasie, Violetta, and many other women who have the same condition. This 58-bed facility is the first specializing in fistulas in Burundi, treating women year-round. Patients stay in lodging built by MSF within the Gitega regional hospital. There is a kitchen, a wash room, restrooms, and an activities area. Located a short distance away from this ’women's village‘ is the operating theater, which has been working at full capacity since the center opened in July 2010. “The objective is to operate on 350 women every year, over a three-year period,” said Chantal Dheur, MSF head of mission in Burundi. “This time frame should also allow us to train three Burundi doctors in specialist fistula surgery.”

Since March 2010, the Burundi Ministry of Health has made treatment free for these patients. It is estimated that there are currently 10,000 women with the condition in Burundi. Across the African continent, this number is estimated at about one-and-a-half million. But Dr. Morren, who has been operating on patients in Gitega since the Urumuri center opened, remains optimistic. “Obstetrical fistulas are perfectly avoidable if we invest in high-risk pregnancy testing, in staff training, and in health care infrastructure. The main reason the phenomenon has all but disappeared in Europe today is that Caesarean sections are performed in good sanitary conditions in the event of obstructed labor.”

Access to emergency obstetrical care, including high-quality C-sections, is essential to eradicating obstetrical fistulas. For those unable to access the requisite care, Dr. Morren said that solutions other than an operation may exist, provided intervention occurs within six weeks of childbirth, when the size of the fistula is not too large. “At present, in operational research, we are treating such ’fresh fistulas‘ using a probe placed in the bladder which allows the fistula to close by itself. If this experiment works, this could be great news for future treatment.”

Effectively, since the technique does not require any surgical intervention, women could be treated directly in health centers without the need to visit a regional hospital. The intervention would also cost much less than an operation. “If it works,” said Dr. Morren, “ we could spread the technique to the hills and thus free these women from suffering, shame and social exclusion.”