Drops of sweat run down her neck, but her eyes are lit up. Mary Nicizanye is recovering at the MSF center in Kabezi just south of the capital, Bujumbura. Four days ago she gave birth to a little girl here. 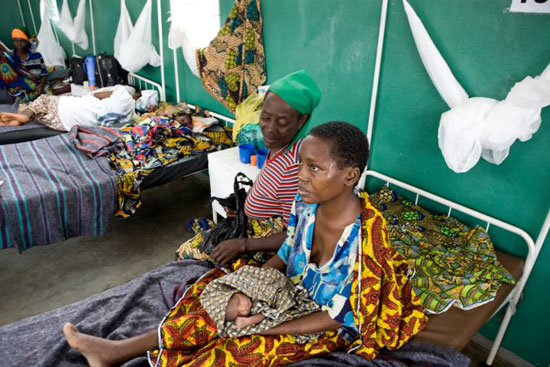 Mary Nicizanye, 30, is one of thousands of women who have received emergency obstetric care at the Doctors Without Borders/Médecins San Frontières (MSF) birth center in Kabezi, just south of Burundi's capital, Bujumbura.

Today, drops of sweat are running down her neck, but her eyes are lit up. Mary is recovering at the center four days after giving birth to a little girl here. Even before she went into labor, Mary was hospitalized at her local health center because she was severely malnourished. She was tranfered to the MSF birth facility in an ambulance when she urgently needed a blood transfusion and her local center could not provide it. 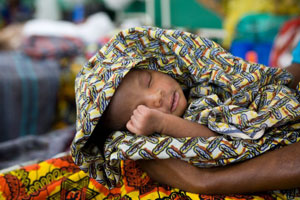 The newborn child is sleeping in her lap, wrapped in a colorful cloth provided by the center. When she was born, the little girl was anemic and underweight. Initially, she was vomiting a lot, but she's much better now.

Mary is also feeling better. Her lips have regained color and swelling in her legs has decreased to the point that she has started walking again today. “If it weren't for MSF, my children wouldn't have a mother,” says Mary, who now has a total of five children.

Today, her mother is here as a grandmother, also sitting on the bed. She was the one who brought Mary to her local health center. And like many of the other grandmothers here, she is taking care of her recovering daughter, cooking her the food provided by the Kabezi center.

Mary is happy for the help that brought her new daughter safely into the world and to have been treated herself. But she does not know what to expect when she goes back home. Her husband didn't want to have anything to do with her after she became ill. He does not know that she is in Kabezi and that she has given birth.

But Mary and her mother are glad that the little girl is alive and in good health now. They have named her Nduwakeza. In Kirundi, the local language, it means "Good news".

It’s dangerous to be pregnant in Burundi 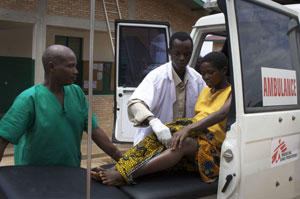 A patient is brought to the Kabezi center in an MSF ambulance.

The health system in Burundi is still suffering from the consequences of the civil war that plagued the country from 1993 to 2006. Because there is no functioning reference system for emergency cases and because many women cannot afford to pay for services, only about half of pregnant women in Burundi receive assistance from trained health workers during delivery. What emergency obstetric care exists is not always available and the quality of the services is poor.

MSF opened the Kabezi facility in 2008 to provide free, specialized care for women with complications during pregnancy and delivery. Now, about 250 babies are born at the MSF center every month. Patients may need assistance due to prolonged labor–which is dangerous for the mother and the child–bleeding before and after delivery, pre-eclampsia, and other conditions.

Helping those who received no help

A mother looks at her newborn baby in the Kabezi birth center.

In addition to treating complicated deliveries, MSF is also offering surgery to women who suffer from one of the worst outcomes of complications during labor – obstetric fistula. A fistula is an abnormal opening between the vagina and the bladder, the vagina and the rectum, or the vagina and both the bladder and rectum. It develops over days of obstructed labor and results in permanent incontinence. That can lead to a number of consequences, including becoming a social outcast.

There are an estimated 10,000 women living with fistulas in Burundi, with 1,000 more developing every year. MSF organized a successful pilot repair project for 30 women in 2009. A permanent project to provide free fistula repair surgery to 350 women per year is being set up now in Gitega, central Burundi. Women who have successful fistula repair surgery are usually able to return to their normal life and rejoin society.

The emergency obstetric emergency care that MSF provides in Kabezi can help prevent fistulas, as well as the very worst-case outcomes – maternal and neonatal mortalty – from occurring in the first place.