MSF is expanding activities in three prisons in Phnom Penh to include basic primary health care in addition to tuberculosis and HIV/AIDS screening and treatment. 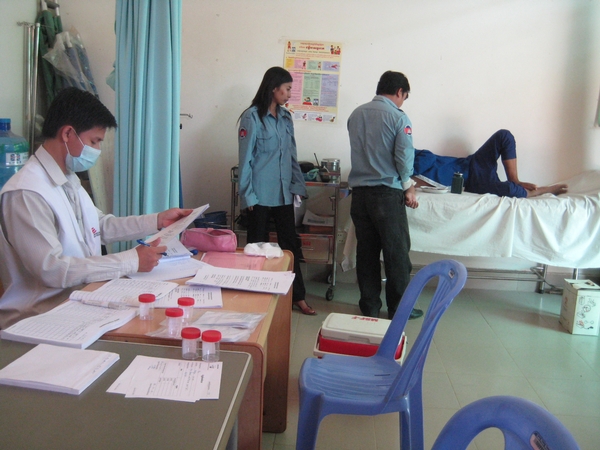 MSF has been working in CC1, CC2, and PJ prisons in Phnom Penh, which collectively contain 25 percent of Cambodia’s total prison population, since February 2010. The priorities have been to improve detection of TB and HIV and provide correct care and treatment for prisoners affected by the diseases during their detention. TB is spread by airborne droplets released when an infected person coughs, so the overcrowded, poorly ventilated and cramped conditions in Cambodian prisons provide ideal conditions for the disease to breed.

Cambodia is one of 22 countries with a high burden of TB, and TB prevalence among Cambodian prisoners is four to six times higher than in the general population. HIV levels are up to nine times higher.

“Prisoners are often from socioeconomically disadvantaged populations that are more vulnerable to TB and . . . frequently lack access to health care,” said Jean-Luc Lambert, MSF head of mission in Cambodia. “Compounding the problem is that prisons have a high population turnover as inmates are moved to other facilities or released, posing serious threats to overall public health.”

In order to respond to the growing TB epidemic in Cambodian prisons, MSF initially focused on implementing a comprehensive TB/HIV screening program for all existing and new prisoners. More than 3,600 prisoners were screened between February 2010 and July 2011. A quarantine area was established where inmates suspected of having TB could be separated from the others to prevent the spread of the disease.

The next step was integrating active TB detection into the routine activities of the Prison Health Posts. Approximately 200 patients have been treated for TB in the three prisons since 2008, 164 as a result of the screening, and 32 are currently under treatment in the MSF program. Ninety-four prisoners are currently on antiretroviral treatment (ART) for HIV/AIDS in CC1, CC2, and PJ prisons.

“We aim to build a system where every new prisoner is isolated and screened for HIV and TB within 48 hours of arrival at the prison,” said Lambert. “The next challenge is setting up effective, feasible, and acceptable procedures for the prisoners to continue receiving quality care after the screening period.”

In order to reduce transmission and TB incidence, MSF works closely with the national TB program and prison health staff in order to improve detection and infection control practices. All “TB suspects” are isolated until their test results are confirmed, and identified drug-resistant TB (DR-TB) patients are isolated for longer periods from other prisoners.

Once a prisoner is diagnosed with TB and/or HIV, MSF provides care and treatment during their detention and facilitates access to drugs and medical follow-up when they are released or transferred to another prison, which is essential in preventing the emergence of DR-TB.

DR-TB can occur when a patient’s treatment for TB is stopped prematurely and the disease develops a resistance to specific drugs. This drug-resistant form of TB can then easily be passed onto other people, meaning that ensuring uninterrupted access to the full TB treatment regimen is crucial in preventing the occurrence of a DR-TB epidemic in close settings, like prisons.

“The key challenge we face is guaranteeing that when prisoners are released they will continue to receive treatment,” said Lambert. “There’s no point beginning treatment inside the prison if the patient will stop taking the medication once they are released. In fact, this may result in the spread of more drug-resistant forms of the disease, which are much more difficult to cure.”

Twenty-nine-year-old Srey (not her real name) was imprisoned in March 2010 and was first screened by MSF in March 2011, when she was found to be positive for HIV but negative for TB.

Srey was placed on HIV medication by MSF and screened again in June due to the emergence of TB symptoms. This time she tested positive for the disease (presumably, it was transmitted by another prisoner). Srey then joined MSF’s TB program and received treatment until her release in October 2011.

“I wasn’t afraid when I found out I got TB because a female medical staff [member] at the prison looked after me and explained the treatment to me,” Srey said. “She gave me good medicine and explained that I had to take them all to get rid of the germs in my body.

“I did not feel well at all in the beginning of the treatment. I felt very tired and coughed a lot. I also had fevers and chills and I shivered a lot. I felt so bad but the medical staff explained that I cannot abandon the treatment, no matter how hard it was. “

Prior to her release, MSF was able to connect Srey to a local medical center in her neighborhood.

“When I was released, I continued the treatment at Chamkardong health center,” Srey said. “I won’t stop treatment until I am completely cured because I live with my child and sister and I don’t want to put them in danger. If others can do it, I can do it as well.”

Chamhardong is one of the new health centers that has been receiving MSF support in staff training.

“Srey is a good example of why it is so important to detect and treat prisoners inside the prison, both from the patient's point of view, but also from a general public health perspective,” said prison project coordinator Christine Wagari. “She was only in prison for a short period of time and was infected with TB just before her release.”

Wagari continued: “Without diagnosis, education, and treatment, she would have brought that disease back into her community. And without completion of her treatment in the local health center, she may have developed and passed on the much more virulent drug-resistant form of the disease."

In addition to continuing to look after the health needs of HIV and/or TB-infected prisoners, MSF is broadening its medical interventions to address the most important health issues facing inmates in the three prisons, including sexually transmitted diseases (STDs), skin diseases, and nursing care. MSF is also engaging in preventative health support activities such as anti-dengue fever efforts and sanitation improvements. MSF mobile clinics now conduct weekly consultations in CC1 and CC2, with an average of 100 consultations per month.

Additionally, MSF will continue to train health staff at the prison and local HIV center to strengthen the capacity of the prison health posts. Ongoing communication and collaboration with different partners should also allow TB and HIV-infected prisoners to be better integrated into the national system.

“To reduce transmission both inside the prison and in the general community, it is essential to treat the detainees as soon as HIV or TB is detected and not wait until they are released,” said Lambert. “Establishing good follow up practices and ensuring treatment links between inside and outside the prison is the most effective way we can fight against this epidemic.”