Cameroon: MSF Responds to a Cholera Epidemic, Now in the Capital

MSF has been treating hundreds of patients at its cholera treatment center (CTC) in Cameroon’s capital city of Yaoundé since March 31. 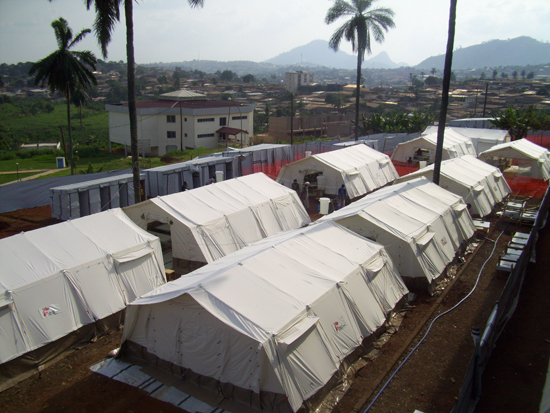 Doctors Without Borders/Médecins Sans Frontières (MSF) has been treating hundreds of patients at its cholera treatment center (CTC) in Cameroon’s capital city of Yaoundé since March 31.

Cholera is usually simple to treat, but about half of people who do not receive treatment will die of dehydration. In severe cases this may take only a couple of hours.

“The main way of treating cholera is through rehydration,” said Gaëlle Faure, MSF head of mission in Cameroon. “This can either be achieved orally, by getting patients to drink oral rehydration salts, or intravenously if the patient is no longer able to drink. The dehydration that occurs in cholera sufferers is a result of profuse diarrhea, sometimes accompanied by vomiting.”

The first cases of cholera in Yaoundé were identified in late February 2011, and a shocking 377 new cases and 15 deaths were reported in just one week at the end of March. Some of Yaoundé’s working class districts are very densely populated, with extremely limited access to clean drinking water. These are significant risk factors for a cholera epidemic.

The Epidemic Began in 2010 in the North

Cases related to this epidemic were seen in Cameroon as early as May 2010. Initially, only the far north of the country was affected, but soon, the Ministry of Health concluded that the area was facing one of the largest cholera epidemics ever seen in the country.

MSF’s work in the north began by setting up eight treatment units in the districts of Maroua, Mokolo, and Kolofata. The teams focussed on improving the operations of existing cholera treatment units, keeping patients in isolation, providing quality care, and ensuring the purification of water. The MSF medical team treated 800 patients and provided 60,000 people with clean drinking water between August and October 2010.

According to official figures, there were 10,759 cases last year—657 of them fatal. The epidemic went on to spread throughout the rest of the country, until nine of Cameroon’s 10 regions were affected. On April 24, 2011, authorities reported 1,757 cases of cholera inYaoundé, with 71 people having died from the disease.

Faced with an increasing number of patients in Yaoundé, and with the capital’s existing health structures stretched beyond capacity, MSF opened its CTC on the site of Yaoundé University Hospital complex. The hospital itself has an initial capacity of 70 beds, extendable to 200 if necessary.

The MSF ambulance began transfering patients from overstretched health structures to the CTC. On May 2, 2011, MSF admitted 558 patients into its new center. As of May 6, of those admissions, 536 have made full recoveries and have gone home. Three people have died.

MSF has also provided support to the city’s health structures in the districts of Cité Verte, Nkoldongo, Djoungolo, and Byemassi, and the town of Obala. MSF set up cholera treatment units and stabilization centers, and worked to train Cameroonian staff so that people in these areas can access treatment as close to home as possible.

During an epidemic, it is critical that people are informed of the signs of cholera, how to prevent it, and where to go if they have it. For that reason, MSF sends a team of health educators throughout the city and surrounding areas to pass these messages on to communities; they also travel to hospitals and health centers to let medical staff know about the CTC.