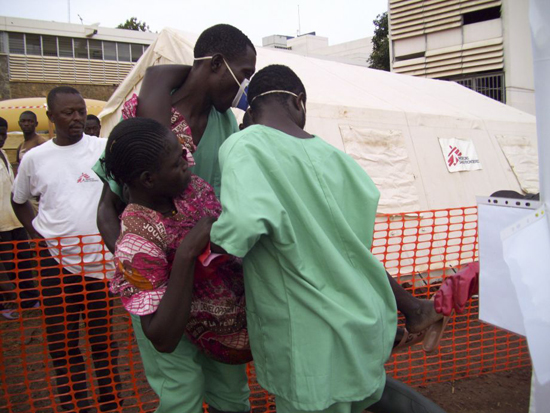 A woman with symptoms of cholera is admitted to the MSF-run cholera treatment center in Yaoundé, west of Douala, in March.

Cholera has now spread to all districts of Cameroon’s largest city, Douala, home to 2.1 million people. The outbreak was officially declared an epidemic in September 2010 and since then it has spiked and declined a number of times. During a rainy period in March and April, the numbers of cases peaked with an average of 120 per week; and numbers have steadily risen again with another rainy period beginning in September. By mid-October, there were more than 400 cases per week.

"The existing health structures were no longer able to care for patients adequately," said Dr. Narcisse Wega, MSF’s emergency coordinator in Cameroon. "We found two to three patients per bed, some lying on the ground or on benches, in appalling conditions. Health facilities had reached their limit and were no longer able to cope with the influx of patients.” 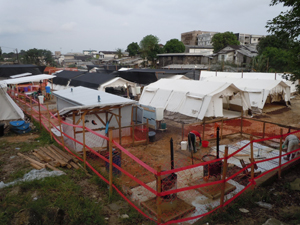 MSF teams carried out an assessment and within days opened a cholera treatment center in Laquintinie Hospital in order to relieve pressure on local health facilities. The center is easy to access from all parts of the city, and Doctors Without Borders/Médecins Sans Frontières (MSF) teams treated more than 350 patients in the first two weeks of its opening.

"We transferred the overflow of patients from existing health facilities to the cholera treatment center, and established a referral system with an ambulance service," Dr. Wega said.

In early November, national stocks of oral rehydration solution (ORS) were depleted and health workers had to treat patients with a homemade solution. MSF has provided the Ministry of Health with more than 120,000 sachets of ORS. “This is enough to treat around 12,000 patients—a figure beyond the number of expected cases,” Dr. Wega said. Each of the city’s 11 existing cholera treatment units now includes an oral rehydration point, where patients are provided with rehydration solution.

MSF’s emergency teams are also conducting prevention activities by purifying water with chlorine and carrying out health promotion activities in communities and through the media.

There has been a gradual decrease in registered cases of cholera in the past few days, raising hopes that the current peak is over. During the third week of November, 15 new admissions were registered every day in the treatment center at Laquintinie Hospital, compared to 40 admissions during the previous week. “This corresponds to the rain having stopped in the past 10 days,” said Dr. Wega.

Cholera is endemic in Cameroon, and is linked to the poor conditions in which many people live. "The majority of patients come from areas where living conditions are precarious," said Dr. Wega, "where houses have been built in flood-prone areas, and where hygiene conditions are poor. There is a lack of latrines and access to drinking water. Faced with these structural problems that help the spread of the disease, the problem can’t be solved through medical intervention alone.

“We treat patients, we raise awareness about hygiene precautions, but we must be prepared to start all over again in March or April when the next rainy season is expected,” he said.

As a result of the recent decrease in case numbers, MSF is preparing the end of its emergency response in collaboration with the Douala health authorities. MSF teams are training local health staff on cholera treatment and hygiene management.

“Our objective is to provide them with the tools to be able to respond to the next epidemic," Dr. Wega said.

MSF has been working in Cameroon since 1984. It supports a pilot project in Nylon hospital, in Douala, to help HIV/AIDS patients who have developed resistance to their drugs to start on second-line treatment. In Akonolinga, in central Cameroon, MSF treats people affected by Buruli ulcer.