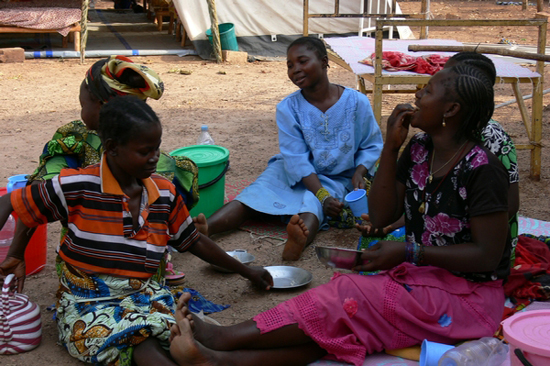 17-year-old Awa (right, in pink skirt) and her fellow fistula patients eat dinner at the MSF fistula camp in Boguila.

In January 2012, 50 women from northwest Central African Republic (CAR) traveled to a hospital run by Doctors Without Borders/Médecins Sans Frontières (MSF) to undergo surgery that would change their lives forever. One of those women was 17-year-old Awa, who made the journey to Boguila to be treated for a fistula she developed two years ago, during the birth of her first child.

Obstetric fistulas are devastating child-bearing injuries that affect more than two million women around the world, mostly in Africa. “I came here because my bladder is torn,” says Awa. “It happened during my first delivery, which took two days, and was complicated. The midwife used an instrument during the delivery which hurt my bladder. My baby died.”

“Obstetric fistulas occur during the delivery of a child,” says MSF doctor Volker Herzog. “Delivery may stop at a certain point because the head of the child is too big or the pelvis of the mother is too small, or the uterus, the muscle, is not contracting correctly, and the head of the baby presses on one point of the birth canal. If you have pressure on one point the tissue dies and this then becomes a fistula, a connection, an abnormal opening from the bladder to the vagina. That means the woman is leaking urine all the time. It's very difficult for them and they often become social outcasts.” Women may also develop other health issues, including kidney infections, skin ulcers, and mental health problems.

Dr. Herzog, a surgeon from Germany, has been holding fistula surgery “camps” in the Central African Republic for the past six years. This year he and his assistant, Swiss midwife Agnes Matti, spent four weeks in Boguila, holding consultations and performing fistula repairs.

With good obstetric care, fistulas are preventable, but most women in the Central African Republic don’t have access to skilled birth attendants or the resources to pay for treatment at a hospital. Dr. Volker says the operation transforms these women’s lives: “They are really neglected. They have no lobby, they don't get money—I’m very happy MSF is doing so much for these women and that we hold so many fistula surgery camps.”

There was a special feeling at the camp in Boguila. For many patients, it was the first time they could speak freely about their illness, and share their stories and their feelings. “I was very happy,” said Awa. “MSF gave us mats, blankets, food, and doctors to take care of us. All the women at the camp suffered from the same disease. We got along very well. We told each other about our lives and the stages of our illness.” Following their surgery, Awa and the other patients spent three weeks recuperating in the camp. Dr. Volker and Agnes Matti visit them twice a day to monitor their progress. Awa is grateful for the treatment she received. She says she is looking forward to returning home, where she plans to find work as a farmer.