As a long-serving MSF doctor, I’ve seen my share of difficult situations. But I was still shocked when I started working in our Bangui HIV/AIDS project. It’s just incredible that, in our day and age, people still die of AIDS!

In the large general hospital where we support the internal medicine ward and the lab, 40 percent of all admissions are HIV positive and 20 percent of the deaths are due to AIDS, even though the country is considered as having a low HIV prevalence. Most of our patients are at stage three or four of AIDS and have serious opportunistic infections that people on antiretrovirals are extremely unlikely to get: tuberculosis, cryptococcal meningitis, [and] Kaposi’s sarcoma.

Even though we knew there were unfulfilled needs for AIDS treatment, we did not expect such a high demand for our services. When we opened the project in collaboration with the Hôpital Communautaire, we had 16 beds and were equipped to care for about 55 patients a month. We now receive over 100 patients a month – far beyond our capacity.

As a result, our patients can only stay four or five days in the hospital to make space for others, even though they are so sick that they should be hospitalized for at least two weeks. So we’re expanding our capacity to 40 beds, including 10 in intensive care. 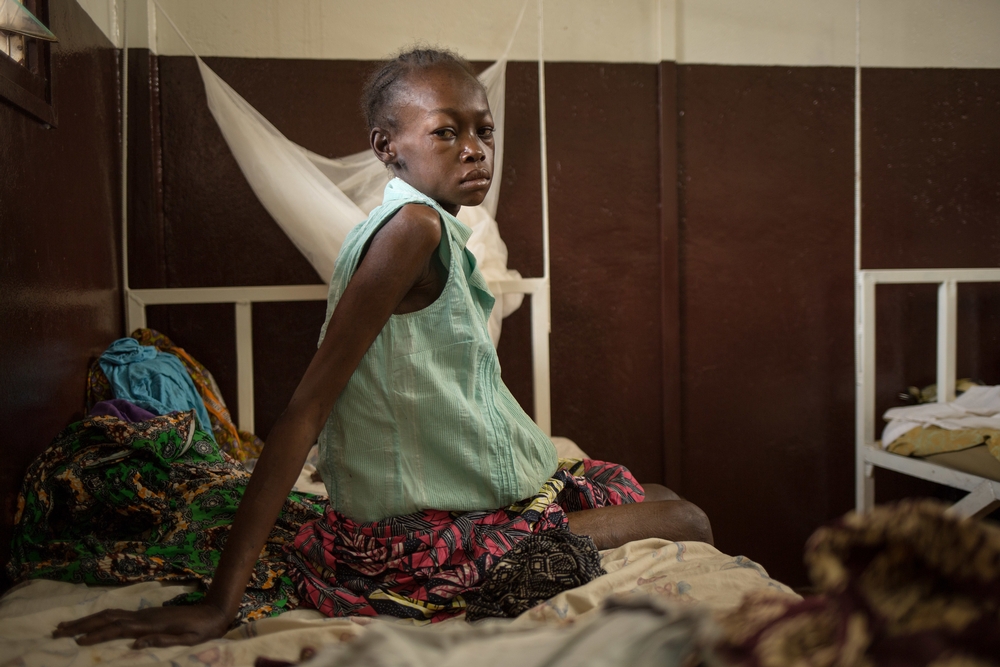 Twenty-six-year-old Cynthia Dounkel was referred to Hôpital Communautaire from MSF’s clinic in Mpoko displacement camp near Bangui airport. She has HIV and tuberculosis and suffers from Kaposi's sarcoma.

"My illness started with nausea, fever, headaches, and pain in my legs. That’s why they brought me here. I don’t have money for medical treatment so I did not look for help for a long time. When I was admitted a month ago, they told me I was HIV positive and that I have tuberculosis.

Since 2013 I live in Mpoko Camp. My father died when I was little. My husband and I separated a while ago – before I got sick. I have a little daughter who is three years old. I don’t have the means to get enough to eat. My mother and my brother are also hospitalized. I don’t have anybody who could take care of me.

I’m taking treatment now for tuberculosis. They say I should wait a bit before I start the treatment for HIV.

I feel a slight change. But I still have a lot of pain, especially in the stomach, and I am constantly tired. I don’t know how long I am going to stay in the hospital and what will happen afterwards.

Sometimes I get very desperate. When I brood over it too much my family tells me to not worry and to always pray. I put my life into the hands of God."

What’s more, half of our patients don’t even know that they have the virus. Stigma is so strong that those who know their status are often seen as pariahs in the society, abandoned by all. Announcing an HIV positive status to our patients is extremely difficult. I would say that 5 percent to 10 percent of the newly diagnosed in our service completely deny what we tell them, particularly the most educated.

Some patients will take their treatment for opportunistic infections, but still refuse to take the antiretrovirals that will keep their HIV virus in check and prevent them from falling ill again. I could say these patients would rather be dead than living with HIV. Last month, the rate of readmission of our patients was 5 percent.

Before my Bangui posting I was working in Tete, Mozambique, where MSF supports HIV treatment in the community. As is mostly the case in high-prevalence countries of Southern and Eastern Africa, our patients can tell you exactly how their immune system is reacting to the virus. They ask to have their viral load tested.

But Bangui is another world altogether. When I arrived, I was wondering, "What is going on here? Can’t people get a minimum of information, through the media, in the community?" But no, there’s nothing, really. 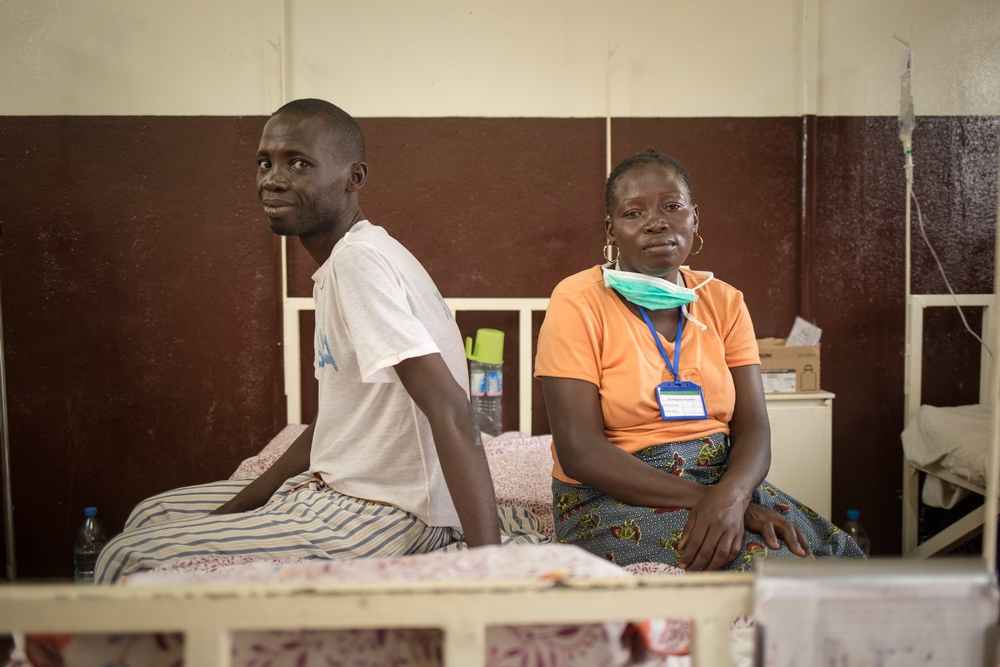 Thirty-four-year-old Faustin and his wife Olga have three children together. Faustin was transferred from MSF’s clinic in Mpoko displacement camp to Hôpital Communautaire. The couple are both HIV positive, while Faustin also suffers from extra-pulmonary tuberculosis, which is not detected in sputum tests.

"I have many professions," says Faustin. "I used to be a driver but in my last job before falling ill, I was a guard. As I worked at night, I had malaria many times. Each time, I had very high fever with temperatures of over 104 degrees. I treated the illness each time in vain.

"One day I went to the pediatric hospital in Bangui to have my lungs X-rayed. They also tested my sputum. Three days later I got the results: The sputum was negative but there where spots on my lungs.

"One Sunday my wife wanted to go to church but in the end stayed at home. If she had left that day, I would have died. While snoozing, I started shaking and couldn’t breathe. My wife called a taxi and brought me to the MSF clinic in Mpoko Camp. They found out that I was severely anemic and I received a large blood transfusion. Then they transferred me to the Hôpital Communitaire. Here they extracted three liters of pus from my lungs, and they will repeat this today."

Olga chimes in: "I had felt pain for a while and as his brother worked in the hospital, he asked me if I was scared to get tested for HIV. I said no and Faustin and I went together and both received a positive test result. Since 2016 we have been on ARVs and we’ve been three times already to collect our medication."

Faustin continues: "It is important to respect the meetings with the doctor who prescribes your medication and to come on that day. . . If I was in another medical institution not with MSF, I would have to pay and would risk getting into debt. I don’t have any problems with taking my medication. Just sometimes there is scramble at the site where we get our medication. Us men, we are patient. But the women are not and want to be served first."

My work here is difficult, but our project is necessary. There is no other place in Bangui to get free hospital care for late-stage AIDS cases. The disease is so neglected that there is no clear protocol for the treatment of opportunistic infections, and medicines are hard to come by. Contrary to Mozambique, where nurses can initiate people on ARV, [in CAR] only a handful of doctors in the country are able to do so.

Lack of access to health care is a reality for most people in CAR, but it’s even more difficult for HIV patients who need uninterrupted, lifelong daily treatment. Those who have been displaced by the violence don’t know how they can get back on treatment. Once you’ve found a treatment center, it can be difficult, costly, and unsafe to travel long distances to get there and pick up the medicine regularly.

I don’t want to say that our project is just a drop of water in the ocean; we’re treating close to 100 patients a month, and before us there was nothing. But I can’t help but wonder: what about those who we still cannot reach?

MSF has worked in CAR since 1997. The Bangui project, in collaboration with the public establishment Hôpital Communautaire, started in March 2016 and, as of July 2016, offers HIV and tuberclosis treatment to around 100 people a month. In MSF-sup­ported facilities countrywide, some 4,813 patients are on antiretrovirals, about 19 percent of the national cohort, including in prefectures with the highest HIV prevalence. Patients are offered diagnosis, treatment, and adherence support free of charge. Provision of HIV services in CAR is challenging, with recurrent bouts of violence further weakening an already fragile health system.

Prisca MONGOUANE, 41 years old, is hospitalised for the second time in hôpital communautaire in Bangui. She is HIV positive and was admitted because of a relapse of abdominal Tuberculosis. She is a divorced mother of five children and lives in a camp for displaced people in Bangui, parish St-Charles Lwanga. Her care taker, Lydie NEMANGA, a friend oh her, and Tanguy ANDJIGBIA, MSF Health promoter, help her to move on a wheelchair in the hospital. 12 July 2016 - Hôpital communautaire, Bangui, Central African Republic. PHOTO: Alexis Huguet/Hans Lucas for MSF