Chad: After the Cholera Emergency, Planning for the Next Epidemic

The cholera epidemic that struck Chad in 2011 was the largest in the last 15 years. MSF responded by treating more than 12,700 patients, or around 75 percent of all cases reported in the country. 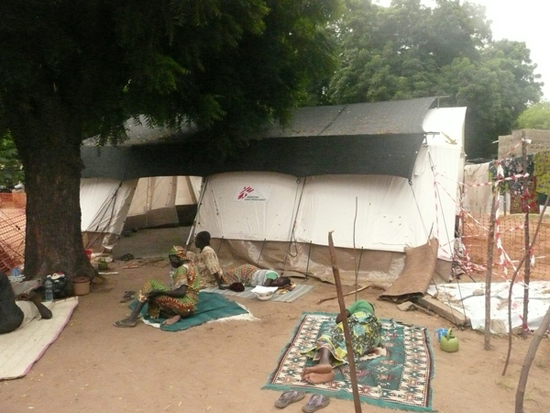 Patients at an MSF health facility in Bongor.

In 2011, Chad and other sub-Saharan African countries were affected by a large-scale cholera epidemic. By late November, more than 17,200 cases of cholera (the largest number since 1996) and 459 deaths had been recorded.

In August, during the height of the epidemic, up to 1,250 cases were recorded each week. One-third of those were in the capital city, N'Djamena. At that time, 350 national and international Doctors Without Borders/Médecins Sans Frontières (MSF) employees were managing 23 health care facilities in Massakory, Am Timan, Abou Deia, Bongor, Mandelia, Pala, Fianga, Lere, Laï and N'Djamena. "The 2011 peak was the continuation of the epidemic that broke out in the region in 2010," says Michel-Olivier Lacharité, MSF program manager in Chad. "This explains its two very specific features: an early increase in the number of cases, well before the rainy season, and a significant geographic spread, with 37 of the country's 61 districts affected."

The MSF teams began working in April, in close collaboration with Chad's Ministry of Health, setting up treatment centers, creating oral rehydration points and organizing awareness campaigns in an effort to limit the spread of the disease. Public health facilities received training in treating cholera as well as contributions of drugs. Thanks to these activities, by late November, more than 12,700 patients—approximately 75 percent of the cases recorded in the country—had been treated, with recovery rates approaching 99 percent.

After the number of cases fell, MSF handed over its activities to the authorities on November 30. However, MSF teams continue to monitor the situation and remain ready to intervene again if necessary. There are concerns regarding possible new outbreaks of the epidemic next spring. (MSF was also involved in helping to treat more than 6,800 cases in the country in 2010).

Intervening at the Front End

"We can't just come in to put out fires," explains Michel Quere, MSF's medical coordinator. "The cholera epidemics are the result of several factors, such as problems in obtaining access to drinking water, latrines and sanitation facilities, as well as the delay in treating cases resulting from a lack of understanding of the illness and complicated access to care. If we don't take action on these structural causes, Chad's population will be condemned to face epidemics year after year."

That is why MSF is now working with Chadian authorities to improve coordination among health actors so that cases can be treated more quickly and to introduce an oral vaccination that was recently pre-qualified by the WHO. "The vaccination offers hope," Quere says. "It may allow us to halt the spread of the disease in high-risk epidemic outbreak areas, such as Lake Chad, along with other traditional activities such as providing access to drinking water and conducting awareness activities. This will require close cooperation among the national ministries of health in the region countries, international public health actors and non-governmental actors such as MSF."

Every year, approximately 3 to 5 million cases of cholera are reported worldwide, of which 100,000 to 120,000 result in death. In 2011, MSF responded to cholera epidemics in Cameroon, Chad, Niger, Papua New Guinea, Zambia, Haiti, and other countries.

In Chad, MSF is also working in Massakory, Moïssala, Am Timan, and Kerfi to expand access to care to the most vulnerable members of the population (including children and pregnant women) and to treat deadly diseases such as malnutrition and malaria. In Abéché, MSF provides treatment for vesicovaginal fistulas among women of child-bearing age.