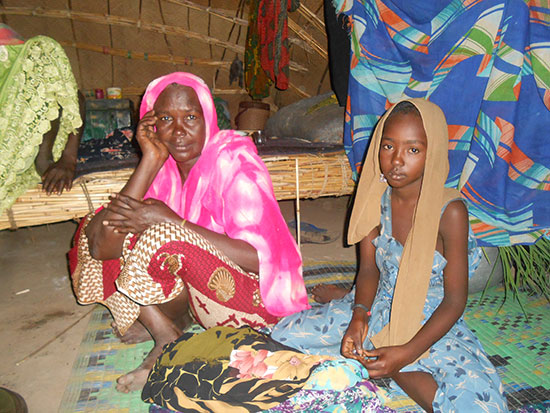 Halima Ibrahim and her daughter Salimata Ali, who was treated for Malaria by MSF.

Doctors Without Borders/Médecins Sans Frontières (MSF) has launched an emergency intervention in southeast Chad in response to an alarming increase in malaria cases. Since the beginning of August, MSF has seen a drastic jump in malaria cases at its long-term project in Am Timan, Salamat region, where the disease has accounted for more than 80 percent of consultations.

Many of the most severe cases are in children under the age of five. At its outreach sites, MSF teams say 73 percent of all patients they are treating also suffer from the mosquito-borne disease.

“The goal of our emergency response is to improve the early diagnosis and treatment of non-severe malaria and to improve the management of severe and complicated forms of the disease,” says Jason Mills, MSF head of mission in Chad. “Many people who live outside the town of Am Timan have limited access to health care. The majority of those who are dying of malaria right now are dying in their homes.”

In response, MSF has deployed an emergency medical team to respond to the situation. The team is supporting local health centers with malaria diagnostic tests and treatment supplies, training Ministry of Health staff, and strengthening epidemiological surveillance. The number of malaria cases seen by MSF has increased ten-fold since the emergency intervention began. At the end of the first week of August, teams reported 1,228 new malaria cases. By the end of the month MSF teams were reporting more than 14,021 new cases of malaria in August alone.

"While malaria is endemic in Chad, the rate of infections this year is beyond all forecasts," says Cristina Mach, MSF medical coordinator in Chad. “Existing diagnosis and treatment supplies in the country are severely strained."

MSF has also increased its capacity to treat severe malaria cases at the hospital in Am Timan town by erecting a malaria treatment tent within the hospital compound where uncomplicated cases can be admitted for treatment and observation on a daily basis. To date, more than 1,400 patients have been treated in the tent. MSF is also planning to distribute mosquito nets to households in affected areas and to conduct a public education campaign.

“Several weeks ago, my eight-year-old daughter Salimata Ali started to shiver and complained of a headache," says the girl's mother Halima Ibrahim. "We took her to a local healer who gave her tablets, but she continued to shiver and couldn’t speak properly. The next day the head of my village came to our compound with doctors from MSF. They tested her and then gave her medication and three days later she was a lot better. Without MSF, Salimata would have died, like so many other children in our village.”

MSF plans to continue its emergency response to the malaria outbreak in Am Timan town and surrounding areas until the end of the rainy season in late November.