Chad: Preventing the Spread of a Cholera Epidemic

Since September, a cholera epidemic in Chad has followed the meandering path of the Bahr-Azoum river—used by many for washing, bathing, and even drinking—southward from the eastern Sila region to the more heavily populated district of Am Timan, in Salamat region, near the border with Central African Republic.

Doctors Without Borders/Médecins Sans Frontières (MSF) moved its emergency response unit from Sila to Am Timan as the epidemic shifted. There were 795 cases and 23 deaths in Salamat region from September 11, when the first case was registered, to November 14, according to figures from Chad’s Ministry of Public Health. MSF has set up a 40-bed cholera treatment center (CTC) in Am Timan, followed by three smaller units in surrounding villages.

As the community struggled to cope with an increased number of cases in Am Timan, the need to raise awareness about the waterborne disease became clear.

“The particularity here is the severity of cases,” said Dr. Roger Haïwe, who is in charge of treatment activities at the CTC, which was set up by MSF’s Chad Emergency Response Unit (CERU) on September 22. “Not only do patients have to travel far to get to the CTC, but they are also afraid to say they have cholera because it has a stigma attached to it.”

At the peak of the epidemic in mid-October, more than half of the patients arrived severely dehydrated because they had either waited too long to come to the CTC or had problems finding transportation. With only two ambulances in a region marked by rough rural roads and poor phone infrastructure, patients faced numerous obstacles to getting treatment.

Villagers had trouble getting through to the ambulance service in Kach Kacha, one of the affected villages in Am Timan district, where the only alternative is to take a costly motorbike taxi.

“They were too sick to be brought on motorbikes,” said Kach Kacha resident Ahmat Issa, recounting how fellow patients eventually made it to Am Timan. They were brought to MSF’s CTC by ambulance along the bumpy and dusty 45-kilometer [about 28 miles] route.

Ahmat, 39, got sick after drinking water from the river while he was harvesting millet. Many patients recount similar experiences, having quenched their thirst in the river while working in sun-baked fields. Farmers are often reluctant to walk to work with the heavy containers of drinking water necessary to get them through the day.

In response, MSF now includes water purification sachets as part of the hygiene kits that health promoters distribute to all patients at the CTC. The kits also include a 20-liter [about 5.2 gallons] bucket for treating water, a bar of soap, a blanket, and a mosquito net.

Inside the recovery tent, 90-year-old Amne Fadou is sitting on a mat with her new hygiene kit, which she cannot see because she is blind. Fadou was dropped off alone at the CTC, as she said her caregivers were afraid of getting cholera. “I was vomiting and had diarrhea; I thought I was dead,” said Fadou, who was being fed by 18-year-old Zara Edouard, another patient at the CTC.

To address the rising number of cases, a team from the Ministry of Public Health opened a small cholera treatment unit (CTU) in Kach Kacha. They enlisted the help of villagers to build a makeshift unit using tree branches and parts of a donated tent that came without instructions. One week later, the unit was overwhelmed with 17 patients lying outside on the ground. MSF later assisted in setting up three additional 10- and 20-bed CTUs in Kach Kacha and other villages in the Am Timan district.

Cholera—which is spread by ingesting food or water contaminated with the feces or vomit of someone carrying the disease—can be treated relatively easily by immediately replacing the fluids and electrolytes lost through vomiting and diarrhea. If left untreated, however, patients can die within hours. 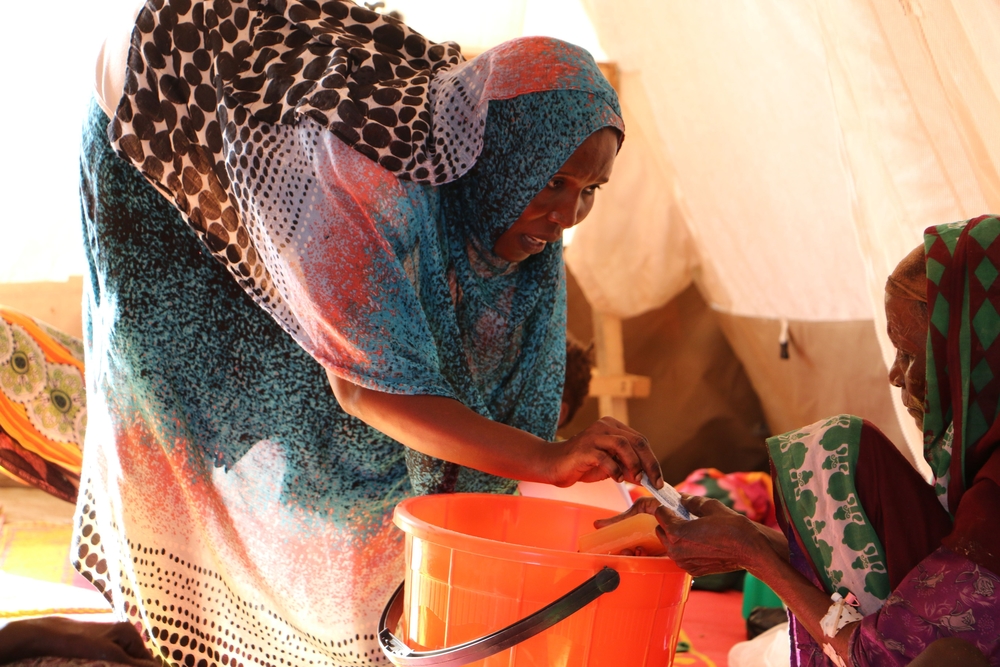 With children still playing in the potentially contaminated river, there is a clear need to inform the community about the importance of proper hygiene. MSF is raising awareness in Am Timan and surrounding villages about hygiene, water treatment, and cholera prevention. There are signs that people are becoming more informed, according to Dr. Haïwe. He said people initially turned up at the CTC at night out of shame; now they are starting to arrive during the day.

To chart the evolution of the epidemic and needs, MSF has also been conducting epidemiological surveillance.

“For MSF, and other nongovernmental organizations, you need to have complete, up-to-date, and reliable information so you can make informed decisions about the activities you implement,” said Jennifer O’Keefe, the MSF epidemiologist collecting and analyzing the data daily.

Ahmat, whose mother had been waiting for him, was discharged after four nights in the CTC. He was very tired and said he could not stand up or eat. When he returns to work in the field—after the lengthy trip back to his village and a period of recovery—he said he will bring his own drinking water rather than drink from the Bahr-Azoum river.

MSF received more than 950 patients in its cholera treatment facilities in Chad from August 14  to November 12. Throughout the country, the Ministry of Public Health registered 1,186 cases and 73 deaths over the same period. Initially, cases were largely concentrated in the Sila region near Chad’s eastern border with Sudan, until the first suspected case was registered in Salamat region on September 11. According to the Ministry, there were 432 cases and 52 deaths in the Sila region, where MSF set up three CTUs and one oral rehydration point.

The Ministry of Public Health declared a cholera epidemic in the Sila and Salamat regions on September 18. As cases diminished in Sila, MSF handed over its activities to the Ministry and redirected its resources southward in Am Timan, in Salamat region, where cases were on the rise. MSF’s cholera treatment center in Am Timan alone received 519 cases between September 22 and November 14, resulting in three deaths.

MSF, which has worked in Chad for more than 35 years, has an existing project in Am Timan, supporting the district hospital and surrounding health centers primarily in pediatrics and maternal health care. In the region of Lake Chad, MSF also supports a regional hospital and provides primary care to displaced populations through numerous mobile clinics. In Moïssala, in the southwest region of Mandoul, MSF carries out seasonal malaria prevention campaigns.