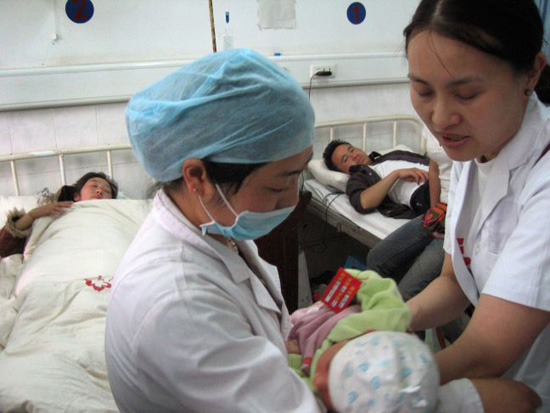 The Chinese government is now estimating that more than 5 million have been left homeless by the 8.0-magnitude earthquake that devastated parts of the country’s Sichuan province 12 days ago. A total of 34 Doctors Without Borders/Médecins Sans Frontières (MSF) team members are now in the affected region and have been carrying out assessments, providing surgical and basic medical care, as well as mental health services, and donating tents and medicines to the relief effort. The local, regional, and national response has been enormous, but some of the needs, especially in the area of shelter, remain.

“This is the largest response to a natural disaster I have ever seen,” said Tony Marchant, MSF emergency coordinator in Chengdu, China. “I am very impressed by the organization of the relief effort and the immense support being offered the disaster victims by volunteers from the community and throughout the country. But there is still a large amount of work to be done, mainly in shelter and reconstruction, and MSF will continue to look into the need for follow-up treatment for those injured in the earthquake. The psychological impact of surviving such a disaster may also not come to the surface until long after the event itself.” 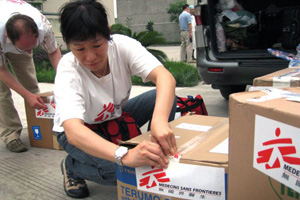 An MSF worker opens boxes of medical supplies donated to a hospital in Guanghan town, Sichuan.

On Friday, May 23, a convoy of ten trucks carrying 2,050 large family tents arrived in Deyang and is being directed, in close collaboration with the Chinese Red Cross, to Mianzhu and other areas most-affected by the earthquake. MSF has now donated 3,800 large family tents worth some 1,069,281 Euros, including transport costs. Two cargo flights carrying 1,750 tents arrived last weekend and were distributed in the affected region and damaged health care facilities in Guanghan and Hanwang with the help of the Sichuan Red Cross and dozens of volunteers. The Chinese government has estimated that there is a need for approximately 3.3 million tents to house those left homeless by the quake.

“The need for shelter is tremendous,” said MSF emergency logistical coordinator Nicolas Tocqué. “I have been in refugee settings where assisting 80,000 people in one location was overwhelming, but it does not compare to the millions who need shelter in China after this earthquake. They need tents not just in quantity, but of good quality, so that families can live in them for the many months it may take to construct adequate housing and infrastructure.” 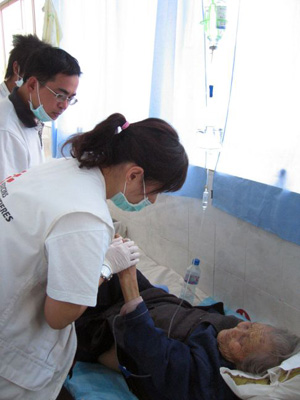 MSF staff treat an elderly woman affected by the earthquake in Sichuan province.

On Thursday, MSF finished its week-long clinical and surgical support to a temporary triage referral hospital in Guanghan, as the majority of patients have been transferred to other facilities and the rest will leave in the coming days. During the past week, MSF provided surgical and post-operative care to some 70 wounded patients who were transported, many by helicopter, to the triage center from some of the hardest-hit areas in the region. MSF has made a donation of medicines and medical supplies to the hospital and will continue its mental health work in the facility until the last patients wounded in the earthquake are transferred.

The demand for mental health work remains in hospitals taking care of the wounded and settlements where earthquake survivors are living throughout the region and there is clear recognition of the need to respond to it. In addition to MSF’s mental health-care work in the triage center in Guanghan, MSF is collaborating with the Huaxi Hospital in Chengdu to provide mental health support and training and is looking into the possibility of expanding the mental health component of our program.

For the past four days, MSF has been providing clinical support to a hospital in Hanwang, Mianzhu city, approximately 60 kilometers east of the epicenter. The hospital suffered severe structural damage in the earthquake and all medical activities are now being carried out in open-air tents near the hospital grounds. The majority of patients who were severely injured in the earthquake have now been transferred to other facilities and this hospital is now offering basic health care to those living in tents, make-shift shelters or the remains of their homes in the region.

The team of two nephrologists from the University of Ghent in Belgium and one from Hong Kong who are specialists in “crush syndrome” and working in collaboration with MSF finished their work in Sichuan yesterday. Through lectures and training in the diagnosis and treatment of the condition, they provided expertise in four of the largest hospitals in the provincial capital of Chengdu, where many of the quake victims have been transported. In addition they donated approximately 60,000 Euros worth of dialysis materials to the Sichuan Provincial People’s Hospital. Crush syndrome is a condition in which muscle tissue damaged by severe internal injury may release massive quantities of toxins into the bloodstream and lead to kidney failure. Left untreated, the condition can be fatal.

MSF teams have now carried out extensive assessments in the affected region, looking especially at the need for medical care and shelter. The teams have found that the response in terms of food, water, sanitation, and hygiene is largely adequate in most places and reconstruction has even begun in some.

This week, MSF teams will continue to assess the needs in the affected region and provide assistance where appropriate. Currently, MSF has 34 staff in the quake-affected regions.

MSF has worked in China since 1988. At the time of the earthquake, MSF staff members were working in Nanning, Guangxi Zhuang Autonomous Region where the organization has been running an HIV/AIDS treatment program since 2003 in collaboration with the Guangxi Public Health Bureau and the Nanning CDC. Early 2008, MSF handed over another HIV/AIDS program in Xiangfan, Hubei Province, to the Chinese authorities.