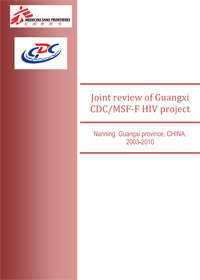 The first confirmed case of HIV infection in China was reported in 1989. Twenty years later, UNAIDS estimates that there are some 740,000 people living with HIV/AIDS across the country, with an estimated 48,000 new infections in 2009. By the early 2000s, Chinese authorities had recognised the widespread nature of the HIV epidemic and reacted by implementing new policies, as well as treatment, prevention and control programmes.

MSF had been present in Guangxi province since the late 1980s, working in various fields, including improving primary healthcare in remote communities and assisting in the response to natural disasters in the region. MSF conducted an exploratory mission in early 2003, and a need was identified in Guangxi for people living with HIV/AIDS. At the time, HIV treatment was neither widely available, nor affordable for the majority of patients. Although the overall number of people infected with HIV in China was relatively low compared to other settings in which MSF works, the number of HIV positive people living in Guangxi was significant. The province had the third highest rate of HIV infection in China, and had at-risk populations such as; female sex workers, men who have sex with men, drug users and migrant workers.

Following the exploratory mission, and after consultation with Public Health Bureau Directors, a memorandum of understanding was signed to begin the joint CDC/MSF project and the first team of expatriates arrived in late 2003 to start collaborating with Chinese partners. As the project began, MSF staff and CDC partners assisted in the drafting of first national protocols to tackle the epidemic. The aim of the project was to offer confidential HIV testing and free treatment and care for people living with HIV. Seven years later, some 1724 patients have received care, many clinicians have been trained in the joint project, and a comprehensive treatment and care model has been designed, modified for a Chinese context and implemented.

After seven years of collaboration, significant progress has been made in Guangxi in terms of HIV detection, treatment and care, and many elements of the CDC/MSF model are being applied in the 45 National ART sites that have been set up across the province.