Cholera Cases Down, But Needs Still High in North Kivu

An update of each area where MSF is present in North and South Kivu provinces and across the border in Uganda.

There was no major fighting reported in North Kivu this past week, but sporadic skirmishes between armed groups continued to drive civilians out of their homes and into the forests for days or during the nights, where they hoped to avoid being harassed. The overall improved security for Doctors Without Borders/Médecins Sans Frontières (MSF) medical teams allowed staff to redeploy to areas where they had been running projects, and carry out evaluations and mobile medical clinics in the surrounding areas. In all MSF projects in North Kivu, cholera cases have been decreasing.

The following is an update of each area where MSF is present in North and South Kivu provinces and across the border in Uganda.

Most of the populations have returned to Kayna, Kanyabayonga, and Kirumba in the North. This area was looted in mid-November after fighting broke out, which resulted in massive displacement. Most of the Ministry of Health staff had also fled the area and the hospital still lacks workers.

MSF supports the Kayna general hospital, which has now resumed its normal activities. Since its return on November 24, the MSF team has been supporting the surgery and pediatrics wards.

Three MSF teams are conducting mobile clinics in Kayna, Kanyabyonga, and Kirumba. Mobile clinics are also carried out in health centers in the surrounding villages of Kikabura, Luofu, Miriki, Kikuvu, and Kasegue, where there are displaced people. MSF donates medical supplies to health centers that were not able to operate following the looting due to shortages of materials and lack of staff. 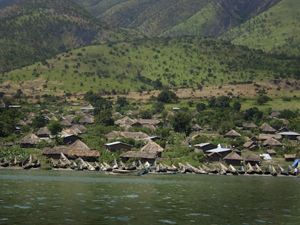 View of Lunyesenghe on the shore of Lake Edward.

In Lunyasenghe, a village on the shores of Lake Edward, an MSF team responded to a suspected outbreak of cholera and set up a cholera treatment center (CTC). Between November 18 and November 30, a total of 75 cases and 12 deaths were reported. Then, the number of cases dropped, so on December 7, the team left Lunyasenghe after training the local staff.

The estimated 11,500 internally displaced persons (IDPs) who settled in Lunysenghe have started to return home.

Further south, in Rutshuru District, the MSF team based in Nyanzale is carrying out mobile clinics in surrounding villages where they provide medical consultations, medical treatment for victims of sexual violence, and measles vaccinations for children.

In Nyanzale town, where MSF runs a 60-bed hospital and nutritional center, 20 patients are currently hospitalized, and several children are being treated for malnutrition. Two measles cases have been admitted.

In Rutshuru town, MSF teams continue to work at the Rutshuru reference hospital. As the situation has calmed down, the number of patients needing surgery has decreased during the three last weeks. However, there is still a high number of patients in the pediatric ward.

In Kabizo, also in Rutshuru District, an MSF team is carrying out consultations and managing a small hospitalization unit.

To the west, in Masisi District, MSF has reinforced its mobile clinics in several locations north of Mweso. The assessment team crossed front lines in order to carry out mobile clinics in Bibwe and Nyange, west of Mweso, where there are many unmet health needs. The population of Bibwe has cleared the road to allow MSF vehicles access, where before the area was only accessible by foot. MSF plans to continue to assist these villages, which are very remote. 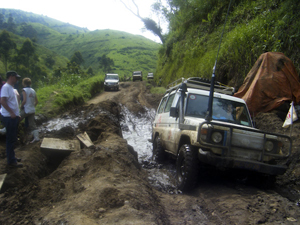 MSF mobile teams on the road near Masisi.

In the Sake area, an MSF team continues to support the hospital in Kirotshe, where 134 patients are currently hospitalized. Last week, about 400 consultations were provided at the hospital and activities in the surgical ward continued. The team also improved a CTC to better isolate and treat cholera patients. Mobile clinics carried out 619 consultations and provided psychological support in three areas controlled by the rebels – Mushake, Karuba, and Rubaya. Teams referred 12 patients to Kirotshe hospital, on the other side of the frontline. In a camp for displaced people in Shasha, south of Kirotshe, MSF is running a mental health program; last week, 741 people attended group counseling sessions and 70 received individual counseling. The MSF program also provides psychological support to demobilized soldiers.

In Masisi town, the hospital is running at full capacity, with a total of 560 admissions in November. In particular, there were 170 deliveries, including 55 caesarean sections. The surgical team performed 114 interventions, including 14 for bullet wounds. Most of the wounded were civilians. Some cases of cholera continued to be admitted – nine in November. At the hospital and a health center in Masisi town, a total of 6,684 consultations were carried out in November. The MSF team also cared for 24 victims of sexual assault. During a measles epidemic in Mianja, north of Masisi, in November, MSF vaccinated 4,300 children aged under 5. After a suspension due to fighting in the region, mobile clinics resumed last week in four locations around Masisi: Mpanamo, Bihambwe, Kinigi, and Bukombo. 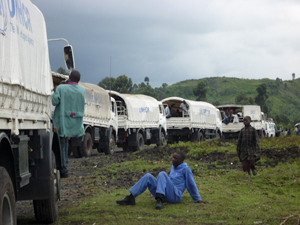 Trucks from the UNHCR start transferring displaced people from Kibati camp to the camps west of Goma.

In Kibati IDP camp just outside Goma, United Nations High Commissioner for Refugees (UNHCR) trucks are now transferring families every day to other camps west of Goma. About 150 families have been transferred, so far. MSF stopped its water distribution activity in Kibati camp and handed it over to another NGO.

At Don Bosco orphanage in Goma, where MSF set up a CTC in early November, the number of daily admissions continues to decrease. Two new cases were reported during the last week, compared to 15 admissions the week before.

At Goma provincial hospital, an MSF surgical team is performing an average of two surgeries per day.

In Minova, an MSF team continues to support the local hospital and health centers, and is treating cholera patients. The number of cases is down to 39, indicating that the cholera epidemic is in its final phase.

In northern South Kivu, in Kalonge, an MSF team is supporting the health centers and the area hospital, mainly by performing ceasarian sections.

Though some sporadic clashes are still reported south of Bunia, people displaced by fighting in October are starting to return to their villages in the Ituri area. MSF carries out mobile clinics in five sites around Bunia: Kotony, Songolo,

Sona, Badiya, and Nyamambo, and in four sites around Gety: Tchekele, Soke, Aveba, and Kaguma-A, to meet the needs of displaced people. Respectively, 765 and 300 consultations were carried out in these areas over the past week. The sites where MSF is present may change over the coming weeks as people return to their villages

MSF is planning an intervention in Ngilima, in Haut-Uélé, as soon as the security situation there is judged to be safe. This location is 45 kilometers (27 miles) from Dungu (2 hours by motorbike), and about10,000 people have been living there without any medical services since the health center was looted on October 19.

Last week, an MSF team also assessed the needs in Mangilingili and Nadu areas and an evaluation was done in Bangadi.

Across the Border in Uganda

In Ishasha, which used to be the main entry point for displaced Congolese in Uganda, there have been no major new arrivals of refugees since November 28. People have been transferred to camps in Matanda, 25 kilometers (15 miles) east of Ishasha, where approximately 10,000 refugees are reported to be staying. 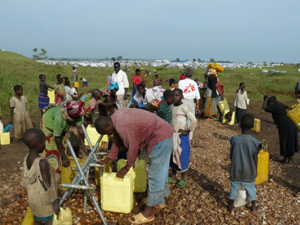 Refugees at the border of the Democratic Republic of Congo (DRC) and Uganda.

MSF teams have performed an average of 130 consultations per day and set up a cholera treatment unit for isolation. In the beginning, water for the treatment unit was taken from the city of Ishasha. Now, MSF is providing 100,000 liters of water to the camp per day after setting up a water pump system.

In Kisoro district, 70 kilometers (more than 40 miles) to the south of Ishasha, Nkedo has become the main entry point into the district. MSF teams have started medical consultations at the Nyakabande site and begun organizing referrals to the hospital, as well as providing logistical support to health centers for immunization.

In Kabahanda/Niakivale transit camps, 350 kilometers (more than 215 miles) to the east of Ishasha, 9,720 refugees have been transferred from the border by the UNHCR since August, when the fighting intensified between the main rebel movement and the Congolese army in North Kivu province. Transfers, which had stopped due to the risk of epidemics, have now resumed with 888 refugees transferred between December 1 and December 7. MSF started organizing medical consultations and the teams are now seeing an average of 200 patients per day. About 53 cholera cases were treated in a CTC set up by MSF. The team is also supplying 130 cubic meters (more than 34,000 gallons) of water per day and cleaning and chlorinating the camp latrines.