Cholera in DRC: "My Youngest Son Was Going Out Like a Candle"

A cholera epidemic has caused more than 250 deaths in western DRC as it spreads through villages and towns along the Congo River. 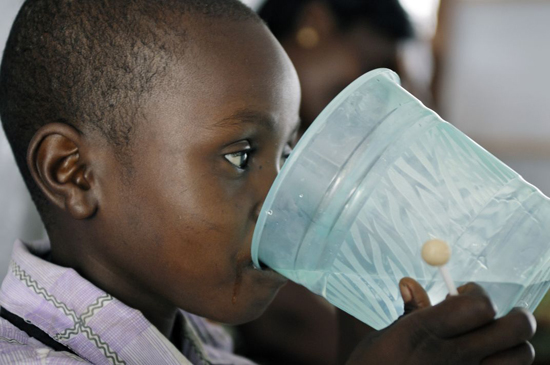 Ebengo was treated for cholera at MSF's cholera treatment center in Mbandaka.

A cholera epidemic has caused more than 250 deaths in western Democratic Republic of Congo. Doctors Without Borders/Médecins Sans Frontières (MSF) has emergency medical teams on the ground and runs a cholera treatment center (CTC) in the city of Mbandaka that has been receiving around 20 new patients a day. The disease is spreading quickly through villages and towns along the Congo River and is on track to soon reach Kinshasa, the crowded capital city. 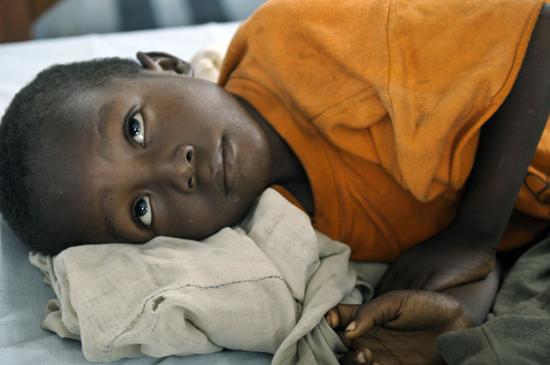 Eliezer was photographed in the ward for moderately dehydrated patients.

Eliezer's father: "To get to the MSF treatment center, we spent all night traveling down the Congo River from Bokuma to Mbandaka [approximately 37 miles]. I had no choice. My youngest son Eliezer was going out like a candle.

At first I thought it was malaria. He followed a course of malaria treatment for a week at the village health center, but with no results. He was hardly eating and was throwing up and having diarrhea all the time. It was on the radio that I heard about the cholera epidemic and that’s when I realized the only option was to get to the CTC as quickly as possible.

Late in the evening I held Eliezer in my arms and and we got a place on the last motorized convoy to Mbandaka. I watched over him all night; I didn't dare close my eyes for a second. As soon as we got here, they started treating him and now he's much better—they say that soon he'll be able to go home. 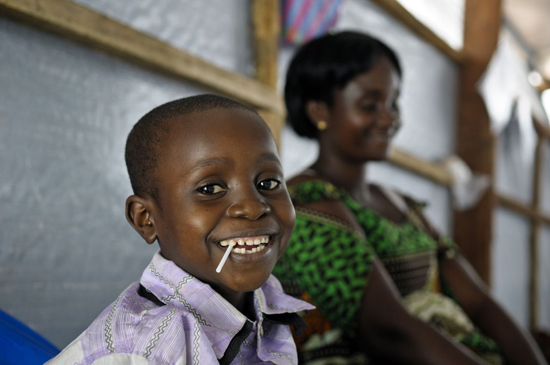 Ebengo and his mother were photographed in the recovery ward of MSF's CTC in Mbandaka.

Ebengo's mother: "He loves playing—he's always trying to sneak away to meet up with his friends. And so when I got back from the market, I was surprised to find him already in bed at 5 p.m. I started to get worried when he said he wasn't hungry—he normally eats a lot. I thought he was just trying to get attention or something, so I went over to see.

Just as I approached the bed, he started violently throwing up. His stomach started cramping badly, but he didn't have a temperature. Three times that night he had bad liquid diarrhea. His eyes were sunken and he was pale and weak. I got very frightened and I started crying and praying. I started thinking he might die. I had lost control of the situation.

Then I remembered the radio announcements they have been playing about the cholera epidemic. I live not far away, just behind the Wangata reference hospital, so without delay, at the crack of dawn I came to the MSF treatment center.

All it took was half a day of treatment and Ebengo is back to himself. He has been moved out of 'C' ward [for the most severe cases] and is now under observation in the recuperation ward. I think that if I had waited half a day more at home, my son would now be dead. I'm going to pay more attention to our hygiene from now on, but it will be hard as my five children and I share our toilets with 20 or so other people."

Khaleb, five and a half years old 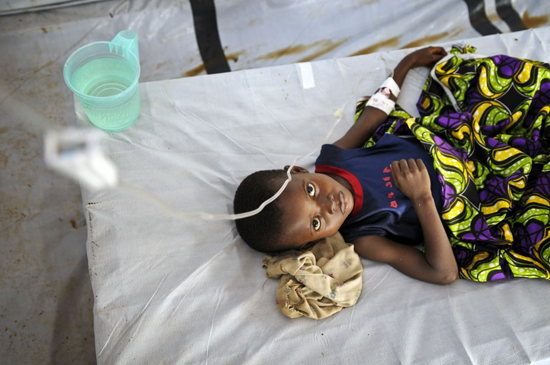 Khaleb's father: "I came here at 6 p.m. yesterday evening. I had heard the information that MSF was sending out about cholera on the radio and that's why I knew to come. Khaleb was vomiting water and he had diarrhea, so I brought him here. I thank MSF for all they're doing here, and the nurses, I thank them too." 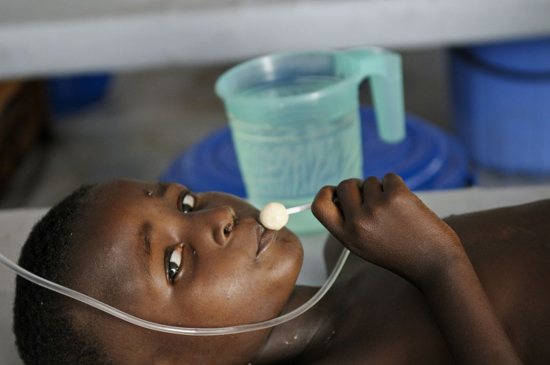 Khaleb, top, and Daniel, bottom, are being treated in the 'C' ward for severe dehydration.

Daniel: "When it all started, I felt hot and I went to wash myself to cool down. But before I could finish washing it all started right there. I started having diarrhea and I got a very bad stomachache and I felt I could hardly stand. Now I feel much better, but I'm very hungry."

Daniel's mother: "We live on the islands just off Mbandaka. I wasn't there; it's my neighbors who saw that Daniel was getting very sick and they came and found me. I was out in my pirogue [dugout canoe] and they came and found me and together we brought him here. Daniel was in a bad way, vomiting and having diarrhea—it was horrible. But things are better now, and I am so happy to see that he is starting to eat again.

When my neighbors came with him and found me, I was afraid. And when we got here I was still afraid—I have no family here, no brothers or sisters, so I was totally alone and afraid. The treatment has been good, and the doctors and nurses have worked ceaselessly to help us. But I have to say that this is the worst experience I have lived through since he was born, and I am still quite frightened." 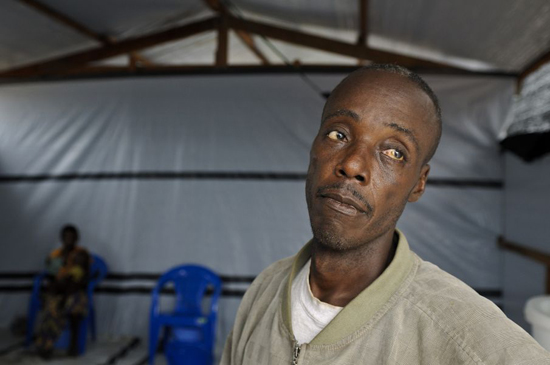 John was photographed in the triage ward of MSF's Mbandaka CTC.

John: “I fell ill yesterday evening. At first I didn’t know what I had. I had diarrhea and I was throwing up all night. In the morning I felt very weak. I became more worried when I saw my oldest son developing the same symptoms. First thing in the morning I jumped on a passing taxi-bicycle and went straight to the nearest pharmacy. They gave me a quick consultation and the result came as a shock to me— cholera. I had heard about cholera but never imagined I would catch it. I keep asking myself a thousand and one questions: did I pick it up at the central market, where I work as a tax-collector? Is it from the well where I get my water? Is my toilet contaminated—I mean, it’s clean, but it’s the only toilet in the street. I just don’t know.

There are no ambulances, so I had to come to the CTC on another taxi-bicycle. When I got here I was less frightened. A doctor told me that everything would be OK. They took me straight to the observation ward, settled me onto a toilet-chair and started giving me a medicine drink. I’m already feeling much better. I’m only throwing up every two hours now instead of all the time. I feel stronger and I’m reassured that MSF has sent people to look for my son. I don’t know how long I’ll be here, but I know I’m in good hands.”

John was able to go home the next day. 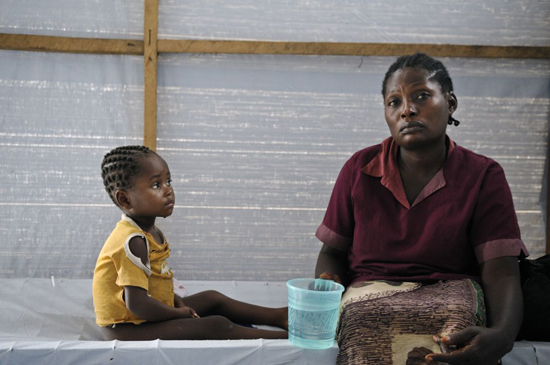 Anna is being treated in the 'B' ward for moderate dehydration.

Anna's mother: "I come from the village of Impombo, a long way away from Mbandaka [approximately 56 miles]. My son and I paddled a pirogue [dugout canoe] all through the night from dusk till dawn to get Anna to the CTC. Anna was in a bad state and I was very worried. I preferred to see her die in the hospital than to die myself of shame if I just stayed in Impondo. And I thought she might be cured if she got proper treatment. There were radio messages that were very clear—the treatment in Mbandaka was good and free. Now, after some treatment here, I am feeling more relaxed; Anna has got her strength back and has even started smiling. I don't want to have to come back here, so I'm going to follow the hygiene instructions they've given me to protect me and my family."