For MSF teams the outbreak is over, but the root causes remain 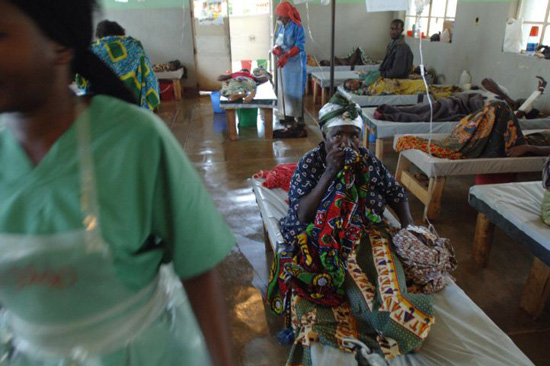 Patients receive treatment for cholera in a cholera treatment center (CTC) in Lubumbashi.

On April 25, 2008, MSF transfered the management of its cholera treatment centers (CTCs) in Lubumbashi and Likasi, in the Democratic Republic of Congo (DRC), to the Congolese health authorities. Since the beginning of the year, 4,691 patients have been treated for cholera in structures run by MSF in Katanga province, in the southeast of the country. Over the last few weeks, the number of patients has decreased sharply.

In January, MSF teams intensified their intervention, first in Lubumbashi, then in Likasi, two cities hit by a severe cholera outbreak. “When the epidemic started, we mobilized 20 MSF staff in 48 hours,” says Bertrand Perrochet, coordinator of the MSF emergency pool in DRC. "We strengthened our treatment capacities for patients at the hospital in the Kenya neighborhood of Lubumbashi; opened a treatment center in Katuba, another neighborhood of the city; and built a treatment center in Likasi, a city located two hours drive away from Lubumbashi, where an alarming number of patients was reported. We also worked in Bukama, further north.

"It was a catastrophic situation, which once again affected the poorest among the people of Katanga, a province known for its wealthy mines," says Perrochet. Cholera is known as a disease of the poor. It typically spreads in places where drinkable water is scarce and where people are forced to live in appalling, unhygienic conditions. During this outbreak, the most deprived people bore the brunt of the failure of the region’s health infrastructure—they contracted a painful and, above all, deadly disease. At least 150 people lost their lives.

There are usually five or six patients in the center, now. “Our team responds to emergencies throughout the country and, therefore, it is time for us to hand over our activities to the Ministry of Health staff. We have worked together for the whole period of the intervention,” says Perrochet.

For MSF teams, the emergency is now over, but for how long? Indeed, neither access to water nor hygiene conditions have improved for the poorest inhabitants of Katanga.

"I got very scared; I was trapped between life and death" 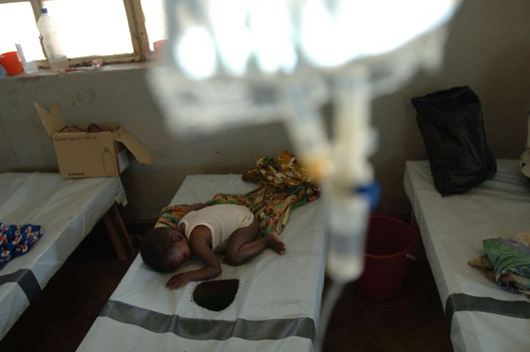 A child sleeps in an MSF CTC in Lubumbashi during a cholera outbreak.

Jean* received care at the cholera treatment center in Katuba neighborhood in Lubumbashi. After five days of treatment, he can now leave the convalescence room and head back to his family. Jean agreed to testify, but asked to remain anonymous. In his community, cholera is a shameful disease.

It all started last Wednesday, at 10 p.m. My stomach started to feel funny, and I had diarrhea. My wife told me that it was because of the vegetables I had eaten. I didn't worry.

But the next morning, things became worse. I took antibiotics—no effect. As we started to understand that this was bad, we looked for transport to take me to the MSF cholera treatment center. I felt very weak; I even fell unconscious.

They took care of me quickly, and I stayed in the observation room of the center. The medical staff gave me rehydration liquids and I started to recover. I felt better. My ears and my throat were not congested anymore.

But the next day at 7 p.m. things got bad again. I received more rehydration liquids; six times at night, and six times again in the morning. I had to do this until I recovered. This morning, I was transferred to the convalescence room. I feel better now, and my body is recovering some strength.

In Katuba neighborhood, we get our water from the public water distribution service, but shortages are very common. That's why my wife has to draw the water from the wells. But, you know, there are hygiene problems. Roads are now like a big dump, full of rubbish. On my street, you cannot drive easily with a car. It is not even a road since it is where all the rubbish is thrown. When it rains, all the rubbish is carried into the wells. Around the wells, you can see people waiting for the waste to sink before they draw the water.

Today, I am cured. I have called my wife and she will bring me some clothes. Then I will be able to leave the center. I got so scared; I felt trapped between life and death. You cannot understand what cholera feels like if you haven't had it. This disease kills. My only fear now is that I will catch it again.

* Name has been changed