51,000 patients treated by MSF since the beginning of the epidemic 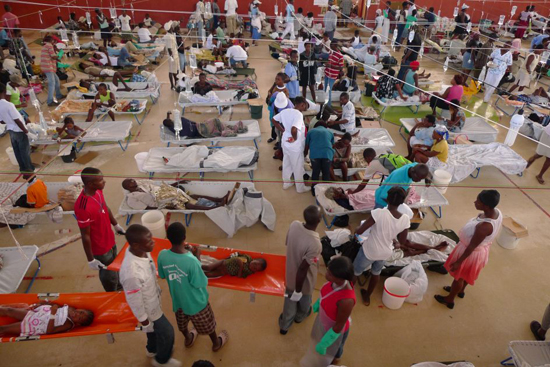 MSF has treated more than 4,000 patients in a cholera treatment center set up in a gymnasium in Cap Haitien, in the North.

Between October 22 and December 5, Doctors Without Borders/Médecins Sans Frontières (MSF) treated more than 51,000 people with cholera symptoms in Haiti, including 1,100 every day over the past week. MSF currently runs 40 treatment facilities throughout the country with a total capacity of about 3,300 beds.

Violent protests erupted in Port-au-Prince Tuesday evening and continued through the next day. Thousands of people demonstrated, set fires, and set up barricades as part of a protest against the announced results of the presidential election.

MSF had pre-positioned medical teams and surgical material in Martissant, Bicentenaire, Francais Hospital, Saint-Louis, Sarthe, and Cité Soleil, as well as at an MSF office in Petion-Ville.

By the end of Wednesday, MSF teams had treated 14 victims of violence, including 9 people with bullet wounds.

It is important to note that MSF activities in response to the cholera epidemic, as well as in our regular medical projects, continued. MSF ambulances were allowed to cross barricades and to circulate freely within the city.

This was key to ensure continued life-saving medical activities, such as referrals of patients with severe cholera or in need of secondary health care.

MSF also aired radio messages to help allow MSF ambulances to continue to move throughout the city and to notify the public of the MSF medical structures that have the capacity to treat wounded patients.

The situation is particularly critical in the north of the country, where the epidemic has spread over the last two weeks. MSF teams are running cholera treatment centers (CTC) in the cities of Cap Haitien and Port-de-Paix. In the North, MSF is receiving 380 patients daily, including 200 in Cap Haitien where 300 patients are currently hospitalized. In Port-de-Paix, in the Northwest, more than 100 patients are being admitted every day and MSF has increased its hospitalization capacity to reach 130 beds.

“We often see only the tip of the iceberg, as we know there are people who are dying from cholera in the rural communities,” said David Schrumpf, who leads the MSF outreach teams in the North. “We are trying to reach them, by car, motorbike or sometimes by foot, to install oral rehydration points and treatment units. Our objective is to provide the more remote populations with a better access to medical care but also to let sick people rehydrate on the way to the first health structures.”

In the capital, Port-au-Prince, the number of cholera cases remains high, but, globally, the number of admissions to the 13 MSF treatment facilities is stabilizing. In total, 14,000 people have been treated, including 1,800 this past week, in the Haitian capital city. In the Artibonite, where the epidemic started eight weeks ago, the number of cholera patients is decreasing: 870 over the last seven days, for a total of 21,000 patients.

MSF teams remain on alert and monitor the epidemiological situation in the country in order to better adapt their activities. Following an increase in cholera cases in several areas of the country’s south, MSF is conducting assessments and is putting in place cholera treatment facilities, notably in Leogane and Jacmel (South), and in Les Cayes and Jeremie (Southwest).

“In areas newly affected by the disease, the population is really scared,”said Alan Lefebvre, MSF emergency coordinator. “The population fears that a cholera treatment center will bring the disease to the community. The challenge is to inform, to raise awareness, and to demonstrate that we are there to treat the sick and that this is working.”

More than 4,000 Haitian workers are working alongside 260 expatriates in response to the cholera epidemic in Haiti. MSF has brought more than 770 tons of medical and logistical supplies into the country to respond to the outbreak.